His parents married in Oklahoma in 1968 and gave birth to their only child, Hale in 1979. 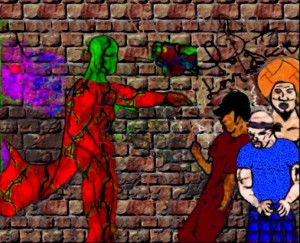 Hale was raised most of his life on the East side of Los Angeles in a poor neighborhood.

His father was a Baptist Pastor, and his mother was a homemaker.

In his early teens, he became rebellious against his parents because of their Christian beliefs; fed up with their rules and having to attend church every Sunday, he decided to join a Los Angeles street gang; becoming involved with this gang kept him in constant trouble with the law.

His parents worked hard to steer him away from the gang life and tried to encourage him to join their church, but he hated God and loved only his parents.

Early one morning, just as the sun was rising, Hale collapsed right on his parent’s doorway from being intoxicated.

After several hours of sleeping, he woke up to a loud thundering sound and quickly got up to shut the front door; he thought he was being targeted from gunfire, and he charged into his parents’ bedroom.

He hesitated for a moment. Hale became puzzled when he saw his father’s prosthetic legs still tucked underneath his covers and his mother’s wig on her pillow—and his parents were nowhere to be found; at that moment he believed in God and began crying from his loss.

But he had no time to stay grief-stricken because fires, plane crashes, riots, and many world catastrophes were happening all at once; he needed to find a safe place to live. His parents’ home was burned down, and he fled for days trying to find a safe place to live. All of Hale’s Christian relatives and friends were gone, and he felt lonely for years.

A great athletic ability he has, but supernatural powers he doesn’t. Everyday Hale risks his life defending the good and the helpless with the hands that have earned him a 3rd degree in Black Belt.

After a busy day of fighting off thugs, Hale sits on the top of a building looking at a sky that used to be so blue, and a sun that used to shine so brightly. I don’t care if they kill me, he resolved.

I have to stop people from taking the mark of the beast—I will never sell out to the anti-Christ—and I have to find a way to rescue those people whom they plan to kill for not taking the mark. Someday, this will all be over with—I can’t wait to be with my Lord. But I have so much work to do.

The thugs started laughing. “This guy is nuts,” said the guy with the Afro. And what’s up with that costume? I would rather join the Illuminati than joining some church!”

“That’s right,” said the gang leader in red, joining in defense of his friend. “My boy may start his own Illuminati group, and my boy in blue will be recruiting Christians.”

“Stop! Stop it,” shouted Hale. “Trouble makers, you are going to regret it, and you don’t have to be a thug to be cool. Follow me, meet friends, and come to know God before it’s too late.

“We are Gods,” said the thug with the Afro. “I have my own powers just like your God, and you can be a God if you join our group. We have our own religion, and we have to eliminate pigs like you.”

The thug in blue put his finger in Hales’s face. “Hell no!”

“Hale was enraged with anger and moved the thug’s hand away from him. “You might not want to point in Hale’s face.”

They wore leather gloves, and they hit him on his face several times. He tried to get away, but there were too many of them. Even though he kicked and fought with all his strength, he couldn’t stop them from carrying him outside and putting him into the back of the van. He tried to force his way out, but he could not see.

The Illuminati members all got into the van. Hale was shaking so hard, he could barely breathe.