He said he’d been in Algeria.  Algiers, Algeria.  I’d asked him how a country could have a city named the same thing as the country, but he’d ignored me.

He was smoking an ugly-smelling foreign cigarette and wearing a pair of pants that were bloused into shiny black combat boots.  Paratrooper boots. 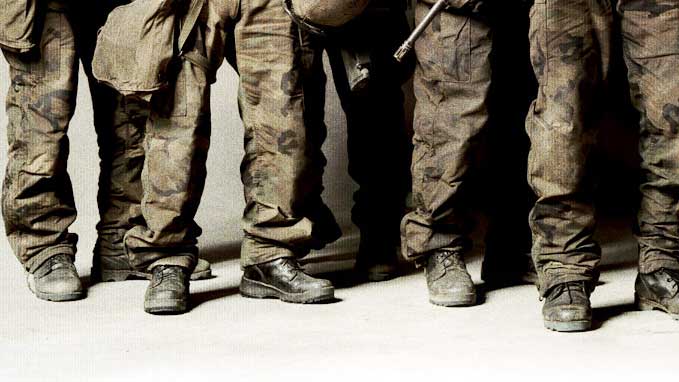 “Why are you smoking those here?  And why are you wearing those boots?” I’d asked him, as we were standing in the foyer of an expensive restaurant.

“Can’t stop.  Was there,” he blew out a big puff of obnoxious white smoke,

“It was bad.  I know I shouldn’t, but I can’t stop.  The cigarettes, the boots, they make me feel right.”  He’d stared at me, the smoke between us fading slowly away, before finishing our discussion with a question.  “I am alright,” he stared for seconds, before going on, “Aren’t I?”

I’d been a child when that had happened.  I’d never forgotten that man, nor the haunted look of his deep black eyes.  But it was the tone of his voice that had indelibly burned everything else into my young mind.  It had been a dark tone of pathos-driven despair.  The tone had riveted my attention, like the deep single play of a very low piano note.

Although I’d not forgotten that time, I also had never associated with it.

I looked down at my boots.  Desert boots.  The new cool ones.  The ones with inserts.  Not like the old French Paratroopers.  His had been polished to a high shine.

My desert boots would never know the touch of anything except a brush.  They were the most comfortable things I’d ever worn on my feet, which was why I always used them.  Sitting alone on the park bench, my long legs sprawled out before me, I breathed out slowly, watching the smoke play down over them.  I ground out the cigarette, not even half done, on the stone handle of the bench.

It’d been years since the war.  The wars.  First Vietnam, then Desert Storm, and finally Afghanistan, with some little inconsequential actions between.  I’d been tested several times for post-traumatic stress.  I didn’t have it.

I shifted uncomfortably on the bench, looking down at my watch.

I had twenty minutes before I went on.  I was going to give a speech in front of a thousand people, about life.  About truth, lies, justice and mythology.  I’d become a published author of thriller novels.  And here I was sitting on a park bench in a public park, wearing an expensive suit, desert combat boots, and smoking a cigarette.  Smoking was totally stupid, and I knew it.  The boots were so out of place with the suit, and the occasion, that they did not bear consideration.

I field-stripped the cigarette and tossed its remnants into the warm Santa Fe winds of autumn.  I was wearing the boots and smoking because those things made me feel right.  I closed my eyes, trying to keep my world from spinning about me.

I felt the wind sweep across my body, then die out to sudden stillness.  I saw myself standing in a foyer, looking down at a little boy.

“I’m alright, aren’t I?” I whispered, but the boy just looked back at me, his eyes large, his body motionless.

Down In The Valley