A parent’s dream is often for his children to follow in his footsteps whether career-wise, the woman he marries or the causes he follows. 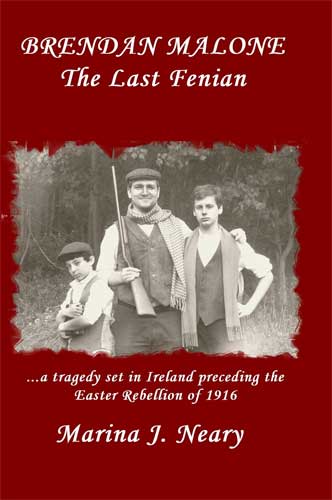 Brendan Malone believed in the Irish Republic Brotherhood. He was a true Fenian who would do anything to help the people of Ireland survive, keep to the land and never waver from their homeland.

But, Brendan Malone never really looked at the entire picture nor did he hear the plea or cries of his younger son, Hugh when he explained his position on being a Fenian and his causes until it was too late. Dylan Malone was diametrically opposite of his brother Hugh.

Falling in line with his father’s wants and wills, he willingly took the sacred Oath of the Fenians in front of all of its membership, would marry the girl chosen for him, and become a staunch member of the Brotherhood.

Both young men college-educated coming back with entirely different viewpoints on how they wanted to spend their lives and where they would spend it.

Hugh considered homely, not good looking and definitely the victim of many amusements by classmates and friends growing up had a magnificent singing voice but he had even more: Conviction and his own plan for life.

Although he seemed like a willing subject to be brainwashed by his father’s beliefs and desires, hidden and masked under that fragile exterior was a strong-willed young man who had made his own bed, would lie in it and not one of Irish descent.

He found a British woman, married her, had a job in Belfast and would become his own man.

Expounding his viewpoints loud and clear Hugh tells his father while preoccupied with taxes and crops and keeping his tenants glued to the land and Ireland he made his way on his own. One father and two sons so different. One would side and go with the cause while the other decided to see the world in a different way.

What will happen and the final outcome will rip the heart out of one man and destroy a family that was once so close as Dylan follows in his father’s path and Hugh makes his own way as I continue my review of Brendan Malone The Last Fenian by author Marina J. Neary.

As the author describes the life of these men, the women they will marry or are married to you see some similarities and differences. Women were not considered intelligent nor were they supposed to have any income of their own.

In some families the children were supposed to accept handouts from parents, follow suit and their rules and eventually take what they can when they had children of their own living under the same roof or a roof built by their parents thereby creating a dependent society and not one able to present a single thought of their own.

Yet, Hugh, intelligent and bright would not let this happen and his decision to leave, based on his lack of any desire to help liberate or free Ireland. Will they drift apart or will they stand tall as brothers even though they are so opposed to what they believe in? Men who want to fight for their cause, too old to really endure battle but hope their young offspring will perpetuate their cause.

The Fenians, both the Brotherhood and Irish Republican were a fraternal organization dedicated to establishing an independent Irish Republic in the 19th and early 20th centuries. It is to this cause that Brendan Malone hoped his two sons would subscribe. Founded in 1858 by John O’Mahony, this was a secret organization founded in America. In Gaelic Ireland these bands of young men were called upon in times of war.

Their purpose was to free Ireland from Great Britain. Fenian, a term used in Northern Ireland and Scotland includes all supporters of Irish Nationalism. Brendan Malone was a staunch supporter of this cause and enlisted his son Dylan as a member.

Dylan submitted to the taking the Oath while Hugh, walked away never turning back. Alienating himself from his family, Hugh pursued the Edith Ashley the daughter of a college professor. Welcomed into the world of academia he still needed and wanted the love and approval of his father. But, lives would change as Dylan and his brother-in-law Donnie leave home to lead a rebellion and the worst is revealed upon their return.

Soldiers with no regard for anyone will attack women for their own fancy as Donnie learns upon returning. Edith, Hugh’s wife had to reconcile herself with the lack of feelings her father showed her before her wedding and the three years his lost taking care of her sisters and not being able to pursue her career as a concert pianist.

As each side takes a stand and Brendan seeks revenge on those who took his family and more, the end result will astound the reader and make you wonder why more thought was not put into what these men decided to do. Author Marina J. Neary brings to light a time in Ireland that battles were fought, lines of demarcation drawn and destruction of families that would never remain whole again.

What happens will not endear you to the British and make you understand what the Irish fought for as an entire IRB unit learns what happens when vengeance is sought and clearer heads do not prevail. Historical fiction, real life drama and the pain of one man, named Brendan Malone who believed in his cause, gave up everything for his beliefs and an ending that lets the reader know the story is not over and there is much more to come.

I never give stars to a great novel.
I give this book: Five Victorious Fenians