Welcome, Beth! It’s good to talk to you today. What is your book about?

A Real Basket Case is the first book in my Claire Hanover gift basket designer mystery series. Originally released in hardcover and large-print in 2007 and a finalist for the 2007 Best First Novel Agatha Award, it is being re-released by Midnight Ink in trade paperback and ebook this month, complete with a jazzy new cover.

In the book, feeling neglected by her workaholic husband, forty-something Claire joins an aerobics class. In a moment of weakness, she agrees to let charming aerobics instructor Enrique come to her house to give her a massage. She realizes she has made a deadly mistake when Enrique is shot and killed in her bedroom and her husband Roger is arrested for the murder. Determined to clear Roger’s name and save her marriage, Claire sets out to find the real killer, encountering drug dealers, jealous ex-girlfriends, and angry cops along the way. 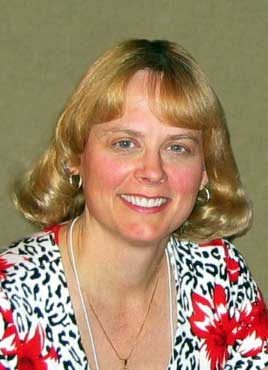 Tell us a little about your main character.

Claire and her husband are empty nesters whose two children are grown, one working and one in college. They live in Colorado Springs, Colorado. In her late forties, Claire suffers hot flashes from periomenopause and has blond-dyed graying hair and blue eyes. She is somewhat overweight and out-of-shape, and thinks she’s dumpy-looking, which is why she joins an aerobics class. An art major in college, she runs a part-time gift basket business out of a basement workshop in her home. She is fiercely loyal to her family and friends, which often gets her into hot water, and her stubbornness can help power her through her fears.

What inspired you to write this particular story?

I start plotting my mystery novels with an idea about the victim and some interesting or unique way in which s/he was killed. For A Real Basket Case, I had a “What If?” inspiration: What if a man is killed in a married woman’s bedroom and her husband is found holding the gun that shot him, BUT he didn’t do it and the woman wasn’t having an affair with the victim? When I have the intriguing set-up–the “What-If” that gives me a puzzle to solve, a protagonist who I’ve gotten to know well enough that s/he starts talking to me in my dreams, and a whiz-bang black moment and climax, when those essential pieces fall in place, I know I’ve got a story worth telling and I start plotting.

How long did it take you to write your book?

It took me about a year to write A Real Basket Case, and that’s about how long most of my books have taken. Now, however, with two mystery series going, I’m having to scrunch that schedule down to about nine months per book.

Did you do any research for the book? If so, how did you do it?

Since I live in Colorado Springs, I didn’t need to research the setting. To learn more about creating gift baskets, which is a hobby for me, I read how-to books and trade magazines for gift basket business owners. Also, I interviewed two women who owned a gift basket business and toured their warehouse/work area, so I could become more familiar with the “behind the scenes” aspects of the business. To learn about police procedure, I attended the 6-month El Paso County Sheriff’s Citizen’s Academy, and supplemented that with reading and Internet research. To learn about guns, I took a full-day class that included a half day on the firing range.

Do you have specific techniques you use to develop the plot and stay on track?

If you’ve heard of the distinction between “plotters” and “pantsers” (those who write by the seat of their pants), as a former software engineer, I’m squarely on the plotting side. I profile my characters and prepare a detailed scene outline before I start writing. For each scene, along with describing what the characters in the scene do, I describe what’s happening “off-camera” to other important characters (particularly the killer) not in the scene. I also list the date, day of the week, and time of day of each scene. As I write the book, I add the scene’s page numbers to the outline to help me find scenes later.

Each book has a directory of its own on my computer with files for the scene outline, character profiles, interviews with experts, research notes, the current manuscript, discarded bits that I don’t want to throw away yet, backups of older versions, the acknowledgements page, change requests from the editor, etc., etc. Then there’s the cardboard magazine file holder stuffed full of paper research materials.

What was the first story you remember writing?

The first stories I remember writing were those I wrote in fifth and sixth grade about a boy named Freddie who had wild adventures such as visiting an underground mole city after burrowing down in a giant screw-mobile. Freddie was a boy, because back in the sixties, I thought girls weren’t supposed to have adventures. I know better now! My two series protagonists, gift basket designer Claire Hanover and whitewater river ranger Mandy Tanner, have all sorts of adventures.

What’s been the most surprising part of being a writer?

The amount of non-writing work involved! There’s the contracting process, research, promotion, networking and all of the other ancillary activities that are part of having a writing career, but that take precious time away from the writing itself.

I’m a very eclectic reader–all types of genres, except that I don’t like to be frightened to death or grossed out, so I stay away from horror and thrillers. I’m in a book club that meets monthly to discuss literary, mainstream, and women’s fiction and the occasional biography or memoir. I also read romance and science fiction occasionally. I read many mysteries, of course. Some of my favorite mystery authors are western and/or outdoor-oriented writers who I’ve gotten to know at conferences. Examples include William Kent Krueger, Kathy Brandt, C.J Box, Christine Goff, and Margaret Coel. I also enjoy light-hearted series such as those by Alexander McCall Smith, Donna Andrews, and Tim Cockey.

What advice would you give to an aspiring author?

1) Join a critique group and listen very closely to what other writers are telling you about your work. If you need to go back and study some aspect of the craft, do it. I spent a year focusing on my weak spot, character development, and now readers tell me that’s what they like best about my writing. 2) Set measurable goals, make out a weekly plan for how to meet those goals and report to someone weekly on your progress. 3) Remember that your words are not golden and that your critique partners and editors have the same goal you do—to improve your writing until it’s publishable. Be willing to change anything to make a story work. 4) Network, network, network! I met my first editor and both my first and second literary agents through networking with other writers. I continue to make contacts with librarians, booksellers, media personnel and others the same way.

How have you marketed and promoted your work?

I promote both in-person and on-line. I have a website, blog, and email newsletter and participate in about three dozen email loops. For social networks, I’m very active on Facebook and Goodreads and mildly active on a few others, though so far I’ve resisted joining Twitter. I usually conduct a book blog tour for each new release. Also, for each new release, I arrange quite a few signings and appearances, mostly in Colorado or as part of trips to mystery fan conventions or vacations. I try to attend two fan conventions a year, usually Malice Domestic, Left Coast Crime, and/or Bouchercon.

What are your current writing goals and how do you juggle the promotional aspects with the actual writing?

I’m currently writing the rough draft of the third book in my Rocky Mountain Outdoor Adventures mystery series starring whitewater river ranger Mandy Tanner. It will take place on the Colorado River in Utah and be titled Cataract Canyon. After I finish that, hopefully, in January, I need to review and correct the galley proof for book two, Wicked Eddies, which will be released in May, 2012. Then I need to edit Cataract Canyon and turn it in in the spring. Then I change gears and edit my existing first draft of the third book in the Claire Hanover gift basket designer series, Basketful of Troubles, which is due in August, 2012. By the end of 2013, there will be three published books in each series.

Promotion is something that is ongoing, and which ramps up around the time of each release (every spring and fall for the next two years, at least). I try to focus on the writing and editing I need to get done each week first, then work on promotion later in the day or later in the week after I’ve finished the writing I need to do to meet my deadlines. I have to be very organized and give myself weekly goals to stay on track.

Where can people learn more about your books?

My books are available in bookstores, libraries, and on-line retailer sites, so your blog readers should be able to find them wherever they are used to finding books to read. Thanks for having me on your blog, Pat!

Thank you, Beth! Best of luck with your books.

Angular Trifecta 8: The Personal Side of Business