An English teacher at Strathroy District Collegiate Institute, Willy Nywening always told her students to write what they know. A Paul Collins interview

Tell us about your background. Who you are, where you are from?
First of all, thanks for this opportunity to chat with you, Paul! 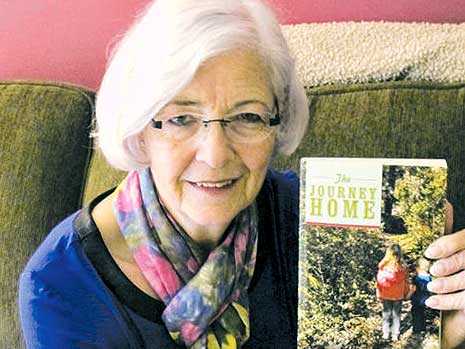 My husband and I live in Strathroy, a small town in rural Ontario, Canada. I am a retired English and special education teacher. I was born in Holland and immigrated to Canada when I was 6 years old. We have 4 kids who have blessed us with 8 wonderful grandchildren who keep us young and busy. We love to travel and spend time with family and friends.

What themes does your book explore and what do you hope the readers will take away from the experience? Is there a particular feeling or experience that you hope to evoke for the reader?
The Journey Home covers many challenging current topics–adoption, non-nuclear families, mental illness and its care or lack of, sexual abuse, and forgiveness.

Each of us it a product of our past experiences–joys and sorrows that have shaped our lives and our character. Most of us have experienced some type of disappointment or trauma. The story conveys the idea that even though we can’t change our past, we can use it to create a better future. I believe the story shows that love has the power to redeem our lives.

What prompted you to be an author and did you have a particular inspiration in mind? Were you influenced by a certain person, artist, or genre?
I have been writing since I was a child. It was always a good release for my thoughts and feelings. Over the years, I’ve written poems, short stories, and articles. In 1997, I wrote an inspirational anthology called Sister Stories. I continue to write educational material for teachers as well. My faith, family, and the grandeur of nature are the sources of my inspiration.

My father, who was orphaned at seven, inspired The Journey Home. Although he had a very difficult childhood, he refused to let it hold him down. He began working in a textile factory when he was only twelve and moved from Holland to Canada at forty. I don’t know what happened to him as a child because he refused to talk about his past. Although the store is entirely fiction, I believe that some of the things that the orphans in the story experience may well have happened to him.

If you could compare your book to any other existing works, which ones would it be and why?
Wow! That’s a tough question. I would love to think that it has some things in common with Margaret Lawrence’s book, The Stone Angel. That’s probably very presumptuous, but one can dream.

Thanks for taking the time for this interview. All the best!
My pleasure Paul, thank you!

Jamie had never met his father, James. He had gone off to war not knowing he was to have another child. Because his parents had been immigrants from Holland, he had felt an obligation to defend his motherland against the invaders. When word came that Hitler’s forces had invaded the country, he had gone immediately to the recruiting office to sign up.

His father had supported the decision, especially since his older brother was needed at home to run the farm. His mother cried when he told her what he was doing. Esther, his wife, had known somewhere deep inside herself that he would not return. Instinctively, they had known each other’s fears. Lovingly, they camouflaged them with words and demonstrations of affection. That last night, they loved each other completely.

Three days a week, Esther went to the Red Cross to roll bandages for the war effort. She wrapped fervently. With each one, she included a prayer that the bleached white cloth would bandage some young man’s injury. She pleaded that the man would be safe, that he would live and come home to his family. Then selfishly, she prayed for James, beseeching God to return him to her. She wrapped desperately, petitioning Him that one of the sterilized cloths would protect her husband from the spiteful wounds of war.

When the white envelope edged in black came, she didn’t open it. It lay on the kitchen table for a long time. She stroked it, smelled it and pressed it to the beating heart in her swollen belly. When the pains of labor began, she unsealed the envelope and delivered her grief in the screams of childbirth. The child tore her flesh as the anguish of her loss ripped open her heart. She delivered the pain, like the afterbirth of the infant. It lay on the floor bleeding. She could see it but feared touching it again, suspecting it would consume her. Reverently she wrapped it up and buried it in a hidden, private place, in the recesses of her soul. She resigned it there, determined she must be resolute; she must be all that her children would need. She would be enough for them.

She named him Jamie, for a father that he would never know except through her parables – stories of courage that she would weave into the fabric of their simple lives.

The Dancer Has Left The Stage, Only Words Remain