I didn’t know what it was about this soft-spoken Asian woman with bright, warm, brown eyes, and a short-cropped hairdo, but I sat awed by her serene presence.  I should have cringed, never having talked to a soothsayer before but there was something about her I liked that I couldn’t quite explain.

My sister, Brenda, and I were on vacation in Hawaii.  When a friend suggested we go see a psychic that she knew, Brenda was apprehensive and refused to join me.  After much persuasion, she finally gave in.  However, the moment we went into Sumiko Seibu’s home, I knew from my sister’s expression that she was nervous.  When she sat down beside me on the couch I held her hand. 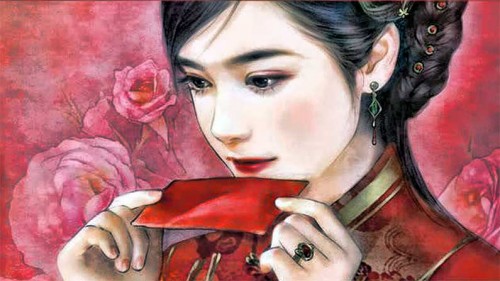 Finally, we proceeded with the real purpose of our visit — to find out if the psychic can detect our problems and zero in on things that bother us.  After looking us over for a few moments, Sumiko turned to pray and meditate for a few moments in front of an ornamented Gold Shrine.  Two large scrolls with black calligraphy written on them were on both sides of the shrine.

While she did this, I had the opportunity to observe the psychic in her own habitat.  She knelt on a thick red-padded cushion with her back to us, surrounded by two lit lanterns, two brass sculptured bells, and various flowers in black porcelain vases.

She began to chant.   Sweet-smelling incense emanated from a black urn on top of one of the teak tables.  Visible smoke spiraled into smoke rings from seven red candles burning brightly in two floral arrangements.

Suddenly she jerked her body to one side as if to avoid something.  Startled by her abrupt move, Brenda and I stared at each other and shrugged our shoulders.  This appeared strange but I was certain she would explain everything later if I asked her.

I listened attentively while she continued her ritual.  I closed my eyes and many thoughts ran through my mind.  What if she predicted something we didn’t want to know, some unpleasant or unhappy premonition that would be best left unsaid or unknown?  Lately, I had been experiencing a feeling of impending doom, some kind of strange foreboding.  I hoped my intuition was wrong, that it was just my nerves.  I opened my eyes, checked the time on my watch, and noticed that this procedure had been going on for over twenty minutes.

The psychic must have read my thoughts because suddenly she turned to face me.  “I’ll begin with you.  Do you feel a heavy load on your shoulders?  Do you suffer from tension in the back of your head that radiates down your arms and neck, moving down toward your mid-back?”

I shifted uncomfortably in my chair.  How could she know?  I did suffer these aches and pains exactly as she said.  She stared at me.  “I don’t mean to alarm you but many bad spirits encircled you when you walked in here today.”

Stunned, fearful of her words, at first I didn’t know how to react.  Wow, bad spirits.  What did she mean by that?   I turned to face my sister in disbelief expecting to get support from her warm gaze. She reached for my right hand.

The psychic scrutinized me and then offered words of comfort.  “Now, now, don’t be afraid.  Bad spirits don’t necessarily mean that something bad is going to happen to you.  It doesn’t mean death.  It only means people have cast their bad feelings onto you. In other words, they have done this through their own conceptions of how they feel about you. There is much jealousy, envy and hatred placed on you.”  Her words astonished me so much that I was speechless.

Brenda laughed and said jokingly, “I can understand that. I’m even envious.   She drives a Porsche and even lives in a three-story glasshouse in California for goodness sake.”

I giggled at her funny outburst because her remark was ridiculous.  What reason is that for hostility or jealousy?  There had to be a good reason to dislike someone, not just because of material things.  I smiled, “That’s silly.  If someone hates me for that reason, they better see a shrink.”

Even though I tried to take this whole matter lightly, not wanting to take her words seriously, she must have sensed my anxiety. She patted my hands that now were gripped tightly on top of my lap.  “Don’t you worry?  I got rid of all those bad spirits for you.  Now move your arms.  Do you feel lighter now?”

Wow!  I did.  It was true.  How can I explain it?  The pain in my back was gone too.  Puzzled, I asked, “How can you get rid of bad spirits?”
She spoke slowly and clearly, taking time to enunciate every word, to make certain we both understood her.

“Didn’t you notice when I was chanting that I moved to the right as if to ward off a blow?  With the help of the Holy Spirit, I lifted the bad spell from you by taking the full impact of the blows myself.  Did you see me lurch to one side?  Surely you both must have seen me even if my back was to you.” Brenda and I exchanged glances.
Although dumbfounded, I still wasn’t convinced by anything she said.  I studied her.  She spoke again. “I do know about bad spirits.  They’re not dangerous.  Not nearly anything like a family curse.”

The phrase, “family curse” got my attention.  I hung onto every word now. The candle flames behind her flickered on and off casting an eerie glow in the room.  She continued on.

“Many years ago, my Uncles all passed on before age 40.  Naturally curious, I asked my mother why and her words were frightening.  “In Japan, your Great Grandfather was an important man – one of royalty.  He had an argument with a Lord from another District.  This resulted in a struggle and a fight to the finish.  Great Grandfather won and the Lord, losing face, prepared to commit Hari Kiri.

However, before he did, he declared nastily,  “For this shame and defeat, causing me and my family dishonor, I place a curse on all Male members in your family.  Not one of them will live past age 38, the age I am now.”  The Lord then stabbed himself in the stomach and perished.

Fascinated, all I could think was that this story was intriguing, entertaining, and incredibly well told but was there any authenticity or truth to any of it?  She stared at me and must have seen the disbelief in my eyes or incredulous expression on my face.  I never could hide behind my emotions.  My face always revealed how I felt.  My sister coughed.

Then the psychic said, “You find this story hard to believe, don’t you?  Well, it’s the truth, and being a priestess, I don’t lie.”

My skeptical sister, silent all this time, surprise on her face, asked,  “You’re a priestess?”

“Yes, I am.  That’s why I was able to lift the curse and save the male members of my family.  I had to try.  It was the only way because true to his word, all the men in our family did die young.”

The whole story was uncanny yet I couldn’t stop listening to her.  Moist tears filled her sad eyes and I saw compassion there.  I was overwhelmed by the deep sorrow I felt for her – a complete stranger whom I would probably never see again.

Suddenly as if embarrassed by her own weakness and tears, she turned away from my gaze.  In a choked voice full of despair, almost like a whisper, she managed to say more to herself than to us,  “It took me over five years to break and lift the family curse.  I now have only one uncle left who’s alive and happy at the age of 42.  All the rest did die from stomach disorders.”

Saddened by her tale, I quickly changed the subject.  I didn’t want her to lose face in front of us.  It was important not to dwell on this issue so I directed her attention back to me.  “How can I cleanse my body from bad and evil spirits so I won’t be troubled by them again?”

She broke into a weak grin, happy for the distraction.  “Are you a Christian?”

I told her I was.

“To eliminate bad spirits, the Holy Spirit says that after your usual nightly hot shower, cleanse your soul by immediately rinsing off your body with cold water then recite Psalm twenty-three out loud.”

I smiled and nodded; delighted she had suggested one of my favorite verses from the Bible. I began to repeat the words.  “The Lord is My Shepherd; I shall not want.”

Through answering my questions, she turned her attention to Brenda focusing on her life.  She told her not to worry.  She didn’t have as many bad spirits as I did.  What was interesting was when she asked if she knew her son had psychic powers.  I laughed because now it was Brenda’s turn to be startled by her words.

Suddenly I felt strange. I sat quietly. It was almost like there was a strong, mystic force in the room.  I couldn’t help looking over my shoulders.  Somehow I felt we weren’t alone, yet, I wasn’t afraid.  I have to admit it was a wonderful, exhilarating experience.

Before we left, the psychic gave me a bottle.  “This holy water has been blessed.  It’s for the purpose of cleansing wounds and drinking if you do not feel well.”   I could tell that she would be insulted if I didn’t take it so I reasoned that there was no harm in it.  Actually, it wouldn’t hurt to use it on an open wound.  It might even work. Who knows?  I gripped the bottle tightly when we left her house and got into our rental car.

We drove away in the bright sunshine, taking in the magnificent Hawaiian greenery.  While it was true that we did the usual things: take in the many sights, enjoy the variety of delicious foods, go shopping and lounge on sunny beaches, seeing this psychic was definitely one of the highlights of our visit.

Most of all, we had fun just being together to look for the one thing that made our trip unique and memorable – an unusual experience.  It was just something more to bring back home to share with family and friends.

Next morning in the hotel, I dropped a glass in the sink and accidentally cut my finger.  I moaned.  Brenda heard me and came running in.  She inspected the cut.  I pretended that the tiny, open bloody wound didn’t hurt much when in reality, it throbbed.

Before I knew it, Brenda reached for the holy water and poured a drop of it on my wound.  Instantly the coolness of the water soothed the cut and the pain miraculously subsided.  Brenda laughed. “I know what you’re thinking.  Any water would have stopped that pain.”

I watched and grinned when she walked away.  If that was so, why did she use the holy water on my open wound?  Could it be that my sister wasn’t skeptical anymore and actually did believe the psychic?

Come and Lie to Me