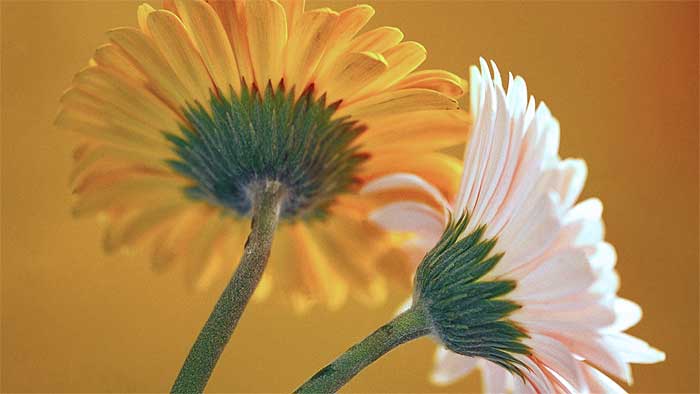 They were the most adorable little daisies, yellow with black Dalmatian-like splotches.

He walked away and into the building.  It was the very same building he had come to every day for the last ten years.

Day in, day out, he would pass by the changing faces of the security guards and janitors and take the elevator up to the top floor, where he would greet the secretary and the receptionist with the same “hello” he greeted everyone else in the office.  He had another “hello,” a more high-pitched one that he reserved for his clients and for people somewhat important to him.  Only one person, Suzy, the executive assistant on the fifth floor deserved his shy “hi.”

He hoped they’d bump into each other for lunch today, as he waited for the elevator.  He knew his office was cluttered with paper and scattered files, and that his computer was already on, and that the co-workers were already gathered by the water-cooler drinking coffee and discussing the huge car accident on the freeway last night.  He dreaded that office, with its false smiles and constant pretense and shallow conversation.

He could not get those yellow daisies out of his mind.  They plagued him ever since yesterday when he took a stroll down the street after lunch.  They were so simple, so carefree, so soft, so cool.  He had had yet another disagreement about money with the “higher-ups”, once again he had been passed up for a promotion, and all his work would not earn him that bonus he so desperately wanted.

He wanted to be able to take a vacation somewhere beyond the confines of the state he lived in, to someplace where he could not bump into someone he knew, or maybe take off a whole month from work, or perhaps more.

What he really wanted to do was to quit, but he hadn’t the guts for that.  The elevator came, and like every day the waiting crowd piled into the cubicle where most conversations were halted or muted and each one re-configured his mind for the office from whatever thoughts he may have had.  And he knew it, he really did, he knew how the office invaded even one’s own mind.

It was like that horrible policy the company passed that made it a firing offense to be caught smoking anywhere even after work on one’s own time.

So he thought of the yellow, soft, succulent daisies and it soothed his mind.  He couldn’t really see them from his office window, only a blur of yellow next to the parking lot, but the knowledge that they were there made the day bearable.  He wanted Suzy to be there at lunch in the cafeteria.  He so wanted to tell her about the yellow daisies and how the spots reminded him of a Dalmatian.

He walked into the office and said his routine hello to the secretary whose name he could never remember, and to the shockingly red-haired receptionist whom he disliked, and to the other semi-nameless, semi-faceless co-workers of his.

He had his coffee and exchanged the recent late-night-TV jokes with the others while sipping his coffee and getting out of the way of the real busybodies who ostensibly had to make a photocopy or send a fax at 8:55 AM just to show the “higher-ups” that they were working, unlike some other people.

He made a few phone calls, typed up that report he had been working on for a week, dictated some silly follow-up letters, and looked for those files he needed for one of his clients.  He used his reserved high-pitched “hello” when one of his clients came by.  Every now and then he looked out the window and saw that beautiful yellow down below.

He was glad when 1 PM rolled by and he informed the receptionist that he’d be out to lunch for about 90 minutes.  He was about to tell her that he’d be in the cafeteria if anyone was looking for him but then thought better of it.  Maybe he’d take Suzy for a real lunch, down the street, to that Italian restaurant.  They’d have to walk past the daisies, and he could tell her how much he liked them.

He got into the elevator, crowded with lunch-bound people, and rode down to the ground floor in a contemplative silence of deep relaxation.  He knew he would have a good day, because he had resolved to salvage from it the two things that gave him pleasure these days.

In between work and the stress of performing to expectations and the bitterness of being underpaid and unappreciated, there was Suzy who had such a sparkle in her eyes for him and for no one else, and there were the daisies – the yellow, black-spotted daisies that made him think of bizarre fantastic yellow Dalmatians.

He got out of the elevator and into the cafeteria.  He looked around eagerly.  Suzy wasn’t there.  He checked his watch, looked over again to the place where she usually sat; it was empty.  The crowd was still light, he thought, perhaps she was delayed.

He sat down, then after a few minutes, nervously got up.  He was hungry but he had resolved to eat at the Italian restaurant down the street, and not here.  He walked out of the cafeteria and waited by the elevators.

He knew it looked bad to be so eager, but they had had lunch already half a dozen times, she wouldn’t be put off by that, especially if he asked her out to the Italian place.  It was such a ritzy place too, with a terrace and waiters in white starched shirts.

The elevator opened for the tenth time and though he didn’t see Suzy, he saw one of her co-workers.  He approached her.  “Is Suzy still upstairs?” he asked. Perhaps he had missed her, or she had gone off in her car, by-passing the ground floor, going directly to the garage.  The woman stopped.  She knew him, she saw him and Suzy having lunch all those times.

She looked over his face, and curiously narrowed her eyes.  “Listen, Billy, well, Suzy had a meeting scheduled today at 9 AM. When she didn’t show by 10 AM, we called her home and her sister told us.”

Perhaps he should have known.  Perhaps it was enough the way the woman looked.  But he did not know, he could not hazard a guess.  “What did she tell you?” he asked confused.

The woman swallowed, looked away then at him again “Suzy was in that accident last night on the freeway.  She was pronounced dead at the scene.  I’m sorry, I’m so sorry, I really have to go,” and she walked away quickly hiding her distress.

He wondered what she was sorry about, was she sorry Suzy was dead, or that she had to go, or that he was waiting or that he hadn’t known, or that she had to be the one to tell him?  He couldn’t figure it all out.  He watched her walk away, and then he walked outside.  He had thought of going to the Italian restaurant anyway.

He passed the daisies and bent down to pick a few of them.  The security guard looked him over from his vantage point, but Billy didn’t care.  He walked past him in the direction of the Italian restaurant.

When he didn’t come back to work after lunch and for a few days later, everyone assumed he had quit, some speculated that it was on account of Suzy.  Only a week later did the office find out that he had died mysteriously in his home.

No cause of death could be found, he was in perfect health, and foul play was ruled out.  He was found on his bed in the very clothes he had worn on the day Suzy died, the last day he had been to work, still wearing his jacket, tie, and shoes.  The only thing the police found that was out of place was a few yellow daisies in his hand.

Hush! – A Woman Passed This Way

The Taxi-Cab Driver and his Neighbors