What would happen if you took the story used by Richard Wagner for his Ring Cycle of operas and moved it from the Dark Ages to the distant future? And what if, the all-powerful Ring became an all-powerful computer chip?  And what if, the fantasy creatures were aliens?  With all those changes, you’d get Wotan’s Dilemma.

It’s a retelling of the Rhinegold Myth as scifi instead of fantasy with humor replacing most of the horror.  Beautiful goddesses, magical gold, quantum electronics, aliens, a murderous god, great heroes: what more could a reader want?

This is the third book I have read by Hank Quense and I gotta say, I don’t think he can write anything that isn’t great! He has once again ensnared my imagination and given me a hell of a good time with Wotan’s Dilemma.
— Angel Reviews 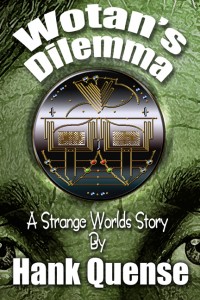 Hank Quense’s seems to have successfully mixed a few genres together to whip up Wotan’s Dilemma. Take a little science fiction, mythology and urban fantasy, take a little of Neal Gaiman’s American Gods, Terry Brook’s Word and Void series, and Robert Asprin’s Myth Adventures and one has Wotan’s Dilemma, a retelling of Rhinegold fables.

The story is ideal for a short read on vacation — about one hundred pages. I have to say, there is something for being able to read a whole story in one evening. Too many novels today suffer from padding the narrative to reach a certain word count. WD follows a fast-paced format, covering several decades in the lives of the characters. I felt as if I had been to see a play, which makes sense because Quense has based the story on Richard Wagner’s Der Ring des Nibelungen, a series of operas. Andy Rector: Goodreads

This turns out to be a retelling of the Rhinegold myth, along with a steep dose of Wagner’s opera. Lots of spoofing of Gods and demi-gods and a wonderful mix of future with bad aliens, Brunhilde myth of Norse legend. A truly mad-cap adventure that was a lot of fun. Bill Tillman: Goodreads

I am a huge fan of the Ring of the Nibilungs and once again Hank Quense has written a book that mixes humor and story in a way that I couldn’t put down. Adam: Goodreads

I found that what I loved the most about this title was the dynamic pool of characters! Mortals, warriors, Gods, and aliens… what more could you add to make a great mythology based tale with a dash (well more like a cup) of scify? How about an ancient Norse myth smashed together with alien technology! Yup that’s right, Quense dares to put things together, that in most cases should never even be close neighbors let alone share a story. Anything that I have come across even remotely similar to Wotan’s Dilemma, just either sounds terrible or lacks some seriously needed elements. Quense, however, totally makes this work somehow. There is humor in different variations, both veiled and obvious. There are inner quests for adventure, love, fame, and fortune; all the best necessities of a successful mythology based story.
— Stephanie McFadden

What has Germanic legends, Norse gods and aliens all wrapped up in a post-apocalyptic world? Wotan’s Dilemma by Hank Quense that’s what!

This is a short story (about 100 pages long) in Hank’s Strange Worlds series. It is a very easy and fun read. (Might just have to check out some more of Hank’s work.)  Whataslacker: Goodreads

Excerpt: From Part Two: Die Walküre
Brunnhilde was torn between her admiration for Siegmund and her duty to Wotan.  She found it so sad that Siegmund had to die on the morning after he had finally found love.  Siegmund, even without her interference, was losing the battle.  Already, Siegmund bled from a number of wounds.  While none of them were fatal, their cumulative effect was.  Soon, Siegmund would collapse from the loss of blood.

It wasn’t fair.  Wotan wanted Siegmund to win and so did she.  It was all the fault of that bitch, Fricka.  Wotan wanted the Rhinegold to defend the existence of Asgard, and Siegmund was the key to obtaining it.  Fricka be damned, she would help her father and Siegmund.

She grasped Siegmund’s elbow and guided his sword, Nothung.  Hunding grunted from the shoulder wound it inflicted.  After another assisted thrust, blood flowed from the side of Hunding’s neck.

Brunnhilde could tell Siegmund gained confidence, and she let him strike a few blows without her assistance.

Hunding suffered more wounds and blood ran down his legs and pooled on the ground as he stood still gasping for air.

Brunnhilde felt a glow of elation.  With her help, two mortals would experience genuine love and live the rest of their lives basking in it.  It was her misfortune that she was incapable of experiencing this love, but she could visit and observe them.

Kettle drums boomed behind her and Wotan strode out of the forest, spear in hand.  Brunnhilde saw the anger in the god’s body language, and she foresaw her demise.  She cowered from the one-eyed scowl he gave her.

Wotan approached Siegmund who readied his sword for another stroke.  Before he could launch the blow, Wotan hit Nothung with his spear.  The sword shattered.

Siegmund stared at the broken hilt in his hand and never saw the stroke from Hunding that pierced his chest.  He collapsed to the ground

Hunding stood over Siegmund and shouted a war cry.

Wotan hit him in the head with the spear shaft and Hunding toppled on top of Siegmund.

The god stood still and glared at the bodies.

Siegmund coughed blood and held out a hand.  “Sieg . . . lunde.”  His hand flopped to the ground.

“Take him to Valhalla.”  Wotan pointed his spear at Siegmund.  “After that, I’ll speak your doom.”

A saddened Brunnhilde grabbed Siegmund’s soul and slung it across her saddle.  She kicked the horse into motion and it leaped into the sky.  She feared Wotan’s punishment, but she didn’t regret the actions that caused Wotan’s wrath.  She did regret that Siegmund had died before he could fully savor his love for Sieglunde.

If only she could experience love like that someday.

Later on, she approached Valhalla.  Siegmund’s soul became more substantial as she grew near.  It also became clothed in his death garments.  She dismounted in front of one of Valhalla’s many doors and dragged Siegmund off the horse, standing him on his feet.

Night had fallen in Asgard and torches — more of Loki’s magic — lit up the outside of the hall.

Siegmund slowly became conscious and she waited for his gasp of surprise, something that happened with every hero when they realized where they were.

Siegmund looked around in stunned disbelief.  “Is this Valhalla?”  He looked at Brunnhilde.  “Are you a Valkyre?”

“Yes and yes.”  She smiled.  “You are now one of Wotan’s chosen warriors.”

Siegmund smiled as he looked around at the great hall.  He didn’t notice the tiles that had slid off the peaked roof or the nearest door that hung askew from a broken hinge.

She led him into the hall.

Valhalla consisted of three sub-halls divided by fire pits that ran the length of the building.  Boars roasted on spits balanced over the fires.  Gaps allowed warriors to cross between the sub-halls.  Everywhere, trestle tables held platters of meat and pitchers of mead and ale.  Thousands and thousands of warriors made a deafening din.  Some sat at the tables chewing or drinking.  Others stood and yelled in each others faces while waving haunches of meat and drinking horns.  Scattered about, berserkers wore only bearskin capes fastened at the neck.

A shocked Brunnhilde noticed how the warriors had grown old.  Most of them now had paunches and salt and pepper beards.  She hadn’t considered that the warriors as well as the gods would age.  A few were elderly and looked feeble.

Siegmund’s face lit up as he looked around, and Brunnhilde knew why.  He had never enjoyed a feast with other warriors after a battle.

A warrior saw Siegmund and Brunnhilde.  He roared a curse and jumped on a table stepping on another warrior’s trencher.  “Siegmund, you bastard.  You don’t deserve to be in Valhalla.  I’m dead because you were in my battle line.  I should still be alive and swiving my wife.”  He shook at fist at Siegmund.  “Tomorrow, I’ll carve out your liver and make you eat it.”

“I have to fight him?”  Siegmund looked at Brunnhilde.

“You fight other heroes tomorrow.  That’s what you do up here.”  She threw an elbow behind her and connected with the throat of the warrior who has just grabbed her backside.  The warrior grunted and staggered backward

“I don’t have a weapon.”  Siegmund looked alarmed.

“You’ll get one in the morning.”

“No, not anymore.  That’s in your past.”  Brunnhilde patted him on the shoulder, left the hall and mounted up.  She sighed.  Time to see Wotan.

Angelica Pastorelli Feb 10, 2011 29
So You Think You Can Write You are an established author and have already published, or you have aspirations to…
Publishing