When she had died I had forgotten everything: all I had ever reproached her, all what had ever made me mad with anger, only a heavy remorse kicked in – why I didn’t allow her to see me regularly all those years, and in the end, why I got mad to such an extent that I just walked out of her house, that last time when I saw her, resolved to never see her again.

There were those periods of time when I had not called or seen her for several years, not even when she had called or sent one of her pathetic letters.

What to say about death? We are never prepared for death. So, I too, was not prepared for it that morning when the telephone rang. It was a call from Pierina, with whom, I have to say, I had not talked precisely ten years.

“What do you want? Why are you calling, and who on earth gave you my number…(and the permission to call – I wanted to add, but I didn’t, it hung onto my tongue.) 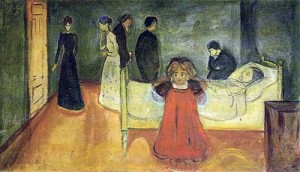 Valeria has died – I saw those very words written on the same screen from which I had wiped off, with a big eraser, all memories about my mother the last time when I travelled by train from Bologna to Milan.

It became reality. Valeria had died. I hung up without saying a word and commenced a sad cry for my mother to whom I had turned my back and all offended had walked out for good.

I went to the office and said to the big wig that my mother had died. He looked at me without a word of consolation. He asked:

“For how many days are you going to be absent this time?”

“Only because I am racked with pain I can’t hear the ring of cynisism in your question. I am going to be absent for one week. And may I ask out of curiosity – how many days would you be absent if your mother had died? Perhaps – none!?”

I said exactly that, that was the exact wording I had used, and in all that despair I was quite proud of my quick wit and courage. I have to admit, it took me off guard, even me, I would not have expected such a brave response.

The feeling of remorse, actually, had accompanied me throughout the whole of my life, but when my mother died this feeling took up the central place on the stage of my, rather delicate, feelings, and then as a sovereign king it was crowned on the invisible throne of my brittle self-esteem.

The voice of remorse accompanied me unceasingly whispering – you are guilty, Otto. There were so many reasons for feeling guilty, so many wrong deeds and decisions and every new minute I was more aware of my tremendous guilt and responsibility of betraying mother, betraying her expectations, never visiting her, getting angry whenever she would say the truth (it was actually the truth) that I was incapable, that I wouldnever succeed, that I would never amount to anything worthy…and so on and so forth. And as it is, it looks she was right, she knew it, and I dare say maybe she had died because of all my wrongs…I faced the truth finally but there was no way back. There was no way to negotiate or to bargain with death: if only you give me back my mother I shall admit that I am a nincompoop, that I shall never amount to anything worthy, I shall admit that I am a nut, an eccentric – give me back my mother, I repent!

No! There was not such a game in anyone’s reality. Death has its own reality ungraspable to us.

Only remorse is what’s left to mortals.

Even though I had turned my back to church, priests and all other beasts long ago, I had promise  myself that I would see the priest when this pain subsided…maybe he would find the way to tell it all to my late mother.

There were so many reasons for the remorse. All the way from my childhood. A different Otto they wanted. I was a defiant child. All I wanted was to be unique or exceptional, even as a little child all I wanted was to be a poet…but, in their reality, in the book of their desires it was written – Otto is going to be a lawyer. Same as his (holy) father. He will inherit father’s business.

Oh, no, no, no statutes! No uniforms, court-clerks, policemen, decrees, no big books full of boring, identical sentences, gray suits, ties, authoritative tone of the omnipotent. No, Otto doesn’t want that!

But, there was no mercy! Who was going to ask a child, anyway? Who did ever ask Otto what he wanted to be? Nobody! My father used to say just to anybody who would or would not ask him about my future “My son is going to be a lawyer.” That inner voice (back then I did not know that it was going to be called the inner voice of remorse) was screaming “No, no, no, this is a mistake, Otto is going to be a poet,”…but I was the only one who could hear this voice. While the expression on my face was telling that it had nothing to do with that tiny voice (there was a smile on my face), my eyes were looking down hiding that secret. And always the same: whenever my father would state “My son is going to be a lawyer,” I would stretch my lips into a twisted smile and would look down at the tips of my shoes. But both; mother and I obeyed father’s wishes without a remark, for there was no place for expression of our own wishes, dreams and hopes…I let all of that for some future time.

In my early years I wouldn’t mention my own desires (waiting for some future time), I would only nod my head and lower my eyes, but when I would find myself all alone, I would sit in the garden and gaze at the crown of an old poplar tree that was showing me to which side the clouds were sailing, and the crown itself looked as the big hand of sky’s clock which was going to show me – the road to heaven.

And to me, Otto Visconti, the only road to heaven was to be travelled on the wings of poetry.

Only on the wings of poetry I could survive in such reality. I was the laughing stock at school: I was the smallest, thin as a twig and timid. When I had to say something I would stutter and there was a hot dumpling in my throat which wouldn’t let my words out. The dumpling’s heat would colour my face and the temple of my head red. There was nothing, yet invented, which could have eased that heat…

The only ease I could find was to sit in the garden and gaze into the crown of my poplar tree which was pointing the road to heaven. My poplar tree was my only friend, my only counsellor and comforter and only I knew that that the poplar tree had a soul. How to explain that to a father-lawyer? Or to a mother who was preparing me to be his carbon-copy? I could express myself only to my poplar tree.

Therefore, I had named my first, never published, collection of poems – Only To My Poplar Tree.

Ivan Stoikov - Allan Bard Jan 22, 2011 1
E-books or Paperback and Hardcover Books?: I heard a couple of years ago that usually, only 10 % of the purchased…
Writing