Casey Holland is a transit security officer who enjoys her job and capturing petty criminals is second nature to her. But, when she takes down her last suspect and is interrogated by her boss and the police what she learns is definitely going to change her life.

Imagine burying your father and finding out that he might have died again? Imagine picturing him in his coffin and then being told by the police they just found his body and he is dead? 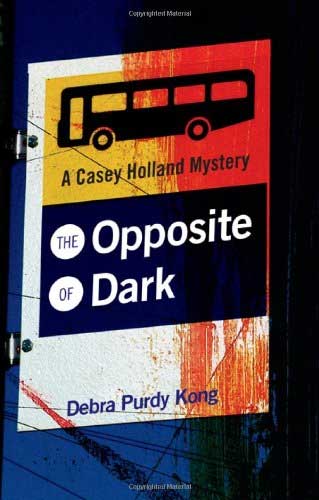 All of the documents found to lead the police to believe the man they found is her father and that the person buried might have been a fraud. But, as the clues are uncovered and she identifies the body Casey realizes that the man she buried as her father three years before was really someone else and the man in the morgue is her father. Why did he fake his death? Who is buried and why did he invent a secret life for himself allowing her to think he was dead? These questions still remain to be answered as the plot thickens in this outstanding mystery titled The Opposite of Dark by author Debra Purdy Kong

The police question Casey, they withhold information about her father and she goes in search of answers along with her father’s girlfriend Rhonda to hopefully learn the hidden truths. Added to the intrigue is someone that is stalking her hoping that she gets scared off and does not learn the truth?

With a mother who she has not seen or heard from in seventeen years and many unanswered questions can she stay one step ahead of the police and the game to find out what really happened to her father and why he was killed? Casey and her father’s fiancé Rhonda try to find out what happened to him they are stopped by the police detective on the case. Rather than giving up, they begin talking to a neighbor only to find out he might have been involved with someone else but the person appears to be missing.

Working as a transit security officer she meets some really unsavory people but her police and investigative skills seem to equal or even surpass that of the detectives on the case and for some reason, they are withholding information from her but she has yet to learn why.

Casey is persistent and will not give up until she learns the identity of both men that are now dead. One is her father but the other still remains a mystery. The plot thickens as she confronts her Dad’s other friend, learns of his secret or sideline business and finds out more about him than she knew before. Secrets, lies, hidden agendas and a secret past all encompass her father’s life. Her mother in touch with Rhonda hoping to find out more about Casey and wanting to claim the body of the man they think was her father. But, Casey won’t stop until she learns the truth and the web of lies, deceit and the danger to her has just begun.

From England to Paris and back home Casey encounters many roadblocks, murders, and unanswered questions all leading in many directions and to many different suspects. One woman named Simone who wants her whereabouts kept secret and fills Casey in on some of the darkness of her father’s life, an ex-wife who seems more involved in his death than she was in his life, plus a fiancé that has her own secrets too, Casey’s life has certainly taken a turn and not for the better. Added to that her hotel room was ransacked, a possible killer physically attacks her and everyone wants to know what her father did with three million dollars that they think she might be able to find.

With her father’s address book in hand, she hoped to locate some of the people listed in it but did not. Added to the mix is her estranged mother who turns up out of nowhere after seventeen years claiming concern for her whereabouts, her safety yet working for one man that Marcus, her father was trying to get away from. Dissolving their partnership and leaving his architect business to another man when did he decide to become involved in the importing and exporting business and just what part did this play in his death? Who was murdered if not Marcus? Did he really die three years ago from botulism or is his latest fiancé telling the truth when she says he just might reappear alive and well?

Author Debra Purdy Kong weaves a tale so intricate and detailed filled with so many plot twists that the reader will stay glued to the printed page until everything is finally sorted out. Did Rhonda, her father’s fiancé and her close friend have anything to do with the murder? Who is this new tenant Darcy that appeared out of nowhere and claims concern for her? Why did her daughter Summer see him coming out of Casey’s room? What connection does he have to Theodore Ziegler her father’s partner?

Wait until all of the pieces fit together and you find out the hidden truth, the secrets, lies, and deceits of all of these characters and much more. As Casey delves in deeper her friend Lou faces more dangers just by being close to her. Will anyone survive this killer? Will she ever find out the truth behind her father’s death? Who is in the morgue and what relationship did he have to her father and to Rhonda? The answer to these questions you won’t believe and you will have to read for yourself.

There are so many layers to this story and so many levels to this plot as Casey learns the truth behind her father’s death, her mother’s lies and deceptions, Rhonda’s duplicity and much more. Meeting Theo Ziegler, learning who Gustaf Osterman was and hearing from too many sources including Rhonda’s different truths about her father, his business dealings and three million dollars that seems to be at the center of all these murders. Greed, deceit, love triangles, one child named Summer caught in more than the crossfire and purse-snatcher that might have started it all. When the police are late and their communications and signals are crossed will Casey get away from a killer or will she never see the light when there is so much dark?

As the pieces fall together and the darkness falls and surrounds Casey and her best friend lies critically ill in the hospital will the light ever shine for her again? This is one fast paced novel filled with characters that will definitely keep the reader wondering just who can Casey trust if anyone and what happens when the startling truths are revealed. This is a definite must read and let’s hope author Debra Purdy Kong brings Casey Holland back again and brings her a shining light.

Dialogues of a Crime

bookpleasures Dec 16, 2010 3
Comments From A Book Reviewer For the past several years I have been reviewing books for my own site,…
Writing