The Beginning of the End:
1st Warning…
I have plenty of warnings!
It all ended with a revolving doorman thief that thought too literally. But that’s a weird short story, so I’ll go back before the ending to the middle! 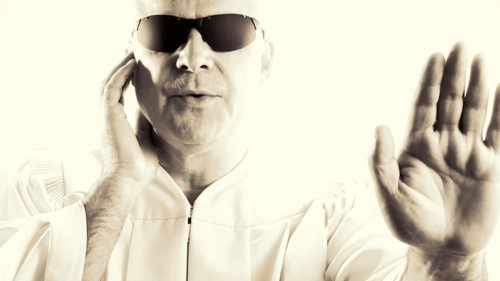 So anyway, I guess it all started when I was sitting on my futon at home one evening. I was thinking about how the alphabet looked like one long word that’s hard to pronounce but easy to spell!
Then my wacky neighbor knocked at the door. He’d always been more confusing than a Rubik’s Cube when you’re color blind!
He started ranting about a new optometrist for cars, with the doorman that opened a revolving door, and all of the owner’s weird demands of the customers. But people would jump through flaming hoops cuz no one else in town had a revolving doorman or could get rid of a car’s blind spot!

Later that day, after he left, my buddy and old ex came over to chill. They were in the middle of an argument over if paper, rock, scissors was played with real objects, which item would win! I told them about the optometrist for cars and the odd rules expected of patrons. My buddy was willing to oblige, but my old ex wanted to rebel like the time she wore deodorant while working at a sweatshop!

Shortly after, as my old ex left to go home, she saw a giant-sized mirror for sale. She bought it because her last one broke on leap day giving her 28 yrs of bad luck! Arriving at her apartment complex, she realized she lost her new set of keys for her new front door that didn’t have a doorman and didn’t revolve. Her front door was originally from a refrigerator, so when opened, all her lights turned on!

Meanwhile, my buddy and I were already at the car optometrist. With every examination, we all got a free side view mirror with depth perception so objects would finally be exactly as far as they appeared! My buddy noticed he was the only customer not to get one and began complaining. I told him to hush like an introverted mime in a library!

While demanding a refund, the owner grabbed and tossed my pal out into the parking lot by his shirt collar. As my buddy dusted himself off, he noticed it was odd that the building’s lobby had a doorman because the only entrance was a revolving door! Then my pal went to his GF’s place for comfort. She was a thief that never took anything literally but literally took some things!

Meanwhile, I returned later that afternoon with my new gf that unknowingly annoyed my friends for taking things too literally but never literally taking anything, unlike my pal’s gf. For example, while not stealing, she once pointed out that all clothes were gay because at some point they came out of the closet!
While in line at the optometrist’s office, she rambled about her literal misinterpretations.

This time, she was saying how every soundtrack of the wizard of oz skips! She was tossed out by the annoyed owner. She also wondered why there was a doorman in front of the revolving door! She dumped me for not standing up for her and began dating someone twice her age. He was 16!

After informing my pal of the recent breakup, he admitted his festering hatred of her literal mind. Days later he reiterated by reminding me of the time she walked into a closed door because the sign said, “Yes, we’re open”!

But by then, my new ex gf and me already gotten back together because I apologized and explained to her that men mature slower than women. This claim was supported by the fact my dad was 46 before he developed breasts! Furious by me taking my new gf back, my pal retaliated by making literal comments to his gf who just lost a dog she stole, simply to prove a point to me. He started by telling her that he was fired from a calendar factory for removing Fridays and Saturdays after his boss told him to ‘take the weekends off’!

Meanwhile, my new gf and I broke up again, as I warned you in the beginning because of her lack of humor. Whenever I told knock-knock jokes, she would ruin the punch line by using the peephole!

My pal was almost about to break down because at this point, his gf stole his style of taking things literally and still couldn’t find the dog she stole. Their conversations became so boring if she stole a tape recorder it would yawn and just pretend to listen!

Meanwhile, still locked out of her apt, my old ex called my whacky neighbor for help by keeping an eye on the mirror so that she could find her keys. He did and passed the time by pondering about if all sketch artists were kidnapped, then the only suspect would most likely be a stick figure!

As he pondered, instead of searching for her keys, my old ex went to the optometrist just to rebel against his rules. While breaking all the owner’s demands, she daydreamed about cough drops because one of the voices in her head had laryngitis!

During all of this, back at my old ex’s apt, my whacky neighbor allowed that missing stolen dog to break the mirror before being stolen again by my pal’s GF. Because of her literal thinking, dog years, and it also being a leap day, she’s still not sure how many years of bad luck it got!

Meanwhile back at the optometrist, my old ex was thrown out for disobeying the rules as my pal’s GF stole several years of bad luck from the dog.
While my old ex dusted herself off, she also wondered why there was a doorman in front of a revolving door!

Meanwhile, my pal’s gf was suffering the consequences for stealing bad luck and literal thinking. She stole a fortune cookie, and it read, ‘you will choke on me’!
After literally believing in karma she returned everything she stole including a sketch artist, AA batteries for a tape recorder that stopped pretending to listen, and shockingly my old ex’s missing keys to her apt.

My pal’s gf was our first suspect about the missing keys but at the time the police suggested it was a stick figure! Using the keys as an excuse, my pal dumped her, but really for literal thinking. During the break up she wondered if straight jackets were also clothes that were gay!

Meanwhile, this all came to an end when I sat on my futon one recent evening as my whacky neighbor knocked on my door; I continued trying to pronounce the alphabet as one long word! After opening my door, my neighbor ranted about a heist at the optometrist’s office.

Both of us knew it was the literal thinking thief my pal dated but she stole the sketch artist again, so we still suspected a stick figure! I asked my neighbor what she’d stolen, and he stuttered…

I impatiently asked for the last time as I became confused like I was solving the Rubik’s cube color blind!
Finally, he answered, “She stole the revolving doorman’s job…literally!”

The End of the End:
One Last Warning…
Found it, I knew I had at least 3!