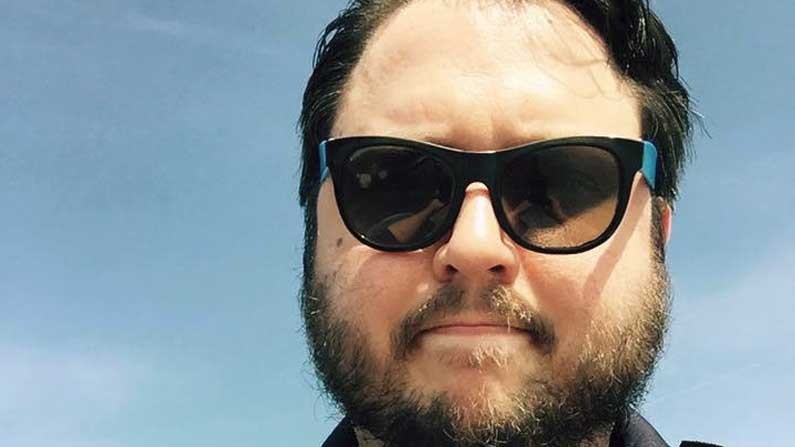 I’m Brandon C. Jones.
I’m named after my father…well, chronologically.
If I was literally named after my father, my name would be “Alleged, Jr.”
I wrote a couple of books, for the younger kids, a book is like an Amish Blog.
The first one was called, “Amphigory Almanac.”
Or, as anyone who bought a copy pronounces it, “Screw Me Outa $12.”

In college I majored in English with a focus in creative writing because I always wanted to be…homeless.
I have a cardboard sign that says, “Will correct grammar for food”.
Strangers on the sidewalk pass me and sometimes ask, “Ain’t got no food?”
“You mean, I don’t have any food.”
“Correct. Here’s a sandwich.”
That’s why I developed a fawning fixation & fascination with words & writing…free sandwiches.

3. What is your earliest memory of wanting to be a writer?

No one decides to have an income that’s less stable than a Jenga Tower with an inner ear infection during a level 5 earthquake.
No one decides to be responsible for more unread pages than an on-call doctor with their beeper on silent.
It’s not a decision, it’s not a choice, It’s insanity.

Like Edward Scissor Hands & Captain Hook trying to communicate using sign language, kinda insanity.
Like a color-blind person trying to solve the Rubik’s Cube, kinda insanity.
Hey, look, alright…Let’s face it, being a writer is like making a decision and more like having a sickness.

It’s a disease & truth be told, it’s a disease with no cure, okay?
It seems the closest thing to treatment is filling the blank page with ink & words.

4. What are your favorite subject(s) and style(s)?

I don’t care about any one subject which is so sad I like to think I put the word pathetic in apathetic.
All I care about is being funny.
I never ask if a joke is offensive, controversial, or taboo.

I only ask if a joke is funny.
I would never do a joke about abortion because it’s a hot-button topic, I would only do it because a joke about abortion brings out the little kid in all of us.
The average writer would laugh if they witnessed a stranger getting hit by a truck, I’m the kind of writer that would only laugh if I was driving the truck, so be glad I’m behind a typewriter & not a steering wheel.

5. How do you work and approach your subject?

Mark Twain said comedy is like a frog:
If you dissect it, you’ll understand it better, but it ultimately dies.
I try not to extrapolate the creative process, it’s like splitting the atom, you can only break it down so much.

Hemingway said the quickest answer is always just doing the damn thing.
So I pick up a pen & don’t put it down until the blank page has vanished like my chances of fame.
There’s no formula for writing a good book, but the formula to writing a bad one is trying to please everyone, I’m the only audience I pander to.

6. What are your favorite written works, writers?

I began writing for myself as a stand-up comedian, so I was writing jokes for the stage before writing jokes for the page, they were originally said before read, told before sold.
This acted as the midwife to the birth of my writing career.
Subsequently, joke writers were my Rosetta Stone while translating the encrypted language of writing.

Steven Wright & Mitch Hedberg were the only ones who made me laugh.
Their jokes are abstract concepts, they’re surreal like a Salvador Dali painting.
Woody Allen’s early collection of treatises was erudite, esoteric, & excellent.

7. What are the best responses you have had to your work?

Good news/bad news:
Bad news…
After reading my book, one person said it was the first paperweight made of more paper.
Good news…

I was glad my mom actually read it.
I kid, I kid.
She didn’t read it.
But she did say that, loudly, then posted it on Amazon…in bold font…all caps.
That was her actual review of my book.

But it wasn’t the only one.
I also got bad reviews.
And, I once wrote a joke about Crest toothpaste.
3 out of 4 dentists agreed it was hilarious.

What I like about my work is it’s something I would read, which is good because few others read it.

I amalgamate attributes merited by two of my favorite authors into one piece:
The ebulliently subtle yet exuberantly celebrated elegant descriptions brilliantly infested by an eloquent commentary of F. Scott Fitzgerald.
And, the signature joke structure & styling of Dennis Miller minus the profuse proliferation of profanity.

9. What advice would you give to other writers?

Don’t ask me to read your work cuz I’ll hate it.
If it’s bad, I’ll hate it cuz I hate bad writing.
And, if it’s good, I’ll be jealous & hate it even more.

In 5 years, I’ll be celebrating the 5th anniversary of bombing this interview.
I’m finally having commercial success as a writer.
It’s taken me 30 years to become an overnight success.

Now, I’m blowing up like an Acme Fire Cracker strapped to the back of a rocket-skating coyote.
But, it won’t last long, like an iPhone battery, soon my success will be found in photographs printed on the back of an expired milk carton.

Mexico: A Theocratic Model for Republicans