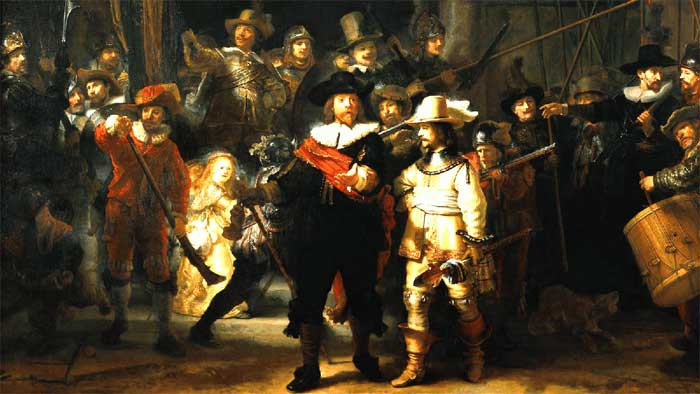 Rembrandt chose to convey his inner feelings, painting a deep conversation with himself about the tragedies and triumphs of his life. For his triumphs, he used stand-out devices that made his portraits pop with excitement.

His silverpoint of his new bride, Saskia, shows the beauty of her love and is inscribed, “This is drawn after my wife, when she was 21 years old, the third day after our betrothal-the 8th of June, 1633.” In seven days, Rembrandt would turn 24. Saskia van Uylenburgh, his only wife, and Rembrandt were married in 1934.

Every once in a while, another Rembrandt surfaces. In 1962, a Rembrandt painted when Rembrandt was a teenager, was authenticated after cleaning by scholars working in the museum of Lyons in France.

Perhaps early paintings will be discovered signed “RHL,” a monogram signature Rembrandt used around the time he attended The Latin School from age 7-14. Rembrandt’s name in Latin form is Rembrandt Harmensis Leydendis, meaning “Rembrandt the son of Harmen of Leiden.”

These painters names came up during my research: Michelangelo Merisi da Caravaggio, Peter Paul Rubins and Albrecht Durer. Yet, I saw no evidence of friendships or collaborations such as you find between Matisse and Picasso or van Gogh and Gauguin. Only six Rembrandt letters are known to exist. Rembrandt never suffered fools gladly and did not bow or scrape, even when he had a need for money.

Rembrandt, the master of chiaroscuro (bright and dark), contrasted light and shadow brilliantly in his works. Realism and mystery play out as Rembrandt painted life in action, unafraid to show life’s messy parts, like garter marks and puffy, imperfect bodies.

A master of coloration, his body of work shows he went from vivid elaborate colors to his signature delicate hues, light blues, and yellows, pale greens, and olive, set off by gray backgrounds and back again late in life to rich color, the brightest colors he had ever used, with a particular preference for the harmonies of red and yellow.

The light looks like it emanates from inside Rembrandt’s figures, making them appear to be both breathing and thinking, well stated by poet Jan van Peterson, who said in commenting on a Rembrandt, “…so that his soul shines through his face….”

FIND OUT MORE ABOUT REMBRANDT
Rembrandt’s home from 1639-58 stands restored to its 17th-century state and is open to the public as The Rembrandt House Museum.