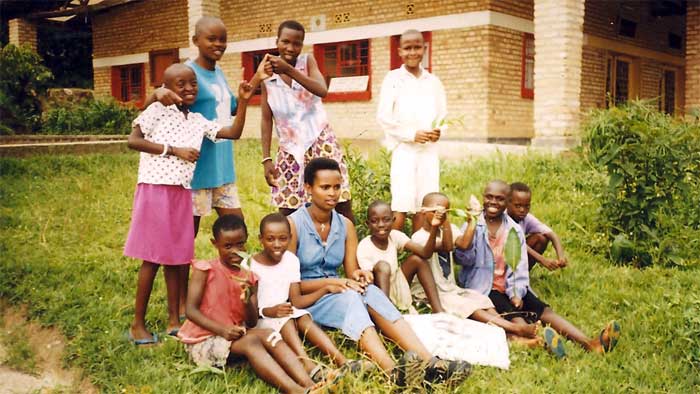 Volunteering for three weeks with a medical team and trauma specialists to provide care to children orphaned by the 1994 genocide and AIDS in Rwanda, is not a young man’s usual birthday wish on their fourteenth birthday.

Yet that is what Shona Blumeneau, a teenager from Santa Cruz, California experienced at ROP Center for Street Children.

“It was really cool and different,” he says with a warm grin. “The people are very kind.”

Some estimates put the number of orphans in Rwanda at over a million. There have been vast improvements since the nineties, but thousands of kids are still living on the streets and many of the orphanages and youth centers that have taken in survivors (also referred to as “street rebels”) are struggling to provide basic needs, let alone education and vocational training for the children in their care.

Shona and his family held yard sales, received donations from relatives and friends across the country, and had a local musician put on a piano concert to raise funds for their journey. “I worked as a referee and as a coach at a summer soccer camp,” Shona recalls.

He saved half of any money he got for his birthday or holidays and put it away for his airfare to Rwanda. He says could have stayed home with friends, “but I really wanted to see Africa and make a difference.”

When he arrived in Africa and started working at ROP Center for Street Children in Kigali, the capital of Rwanda, Shona found that “half the time the kids accepted me and tried to bring me into their culture and the rest of the time they wanted me to get the things or bring them home to The States.” He said they all assumed he was rich because he was from America and comparatively speaking, he is.

The average daily wage in Rwanda is about one US dollar per day. “It would be hard to grow up in an orphanage and not have a family to support you,” he reflects. Every morning they returned the boys and girls would approach, grab his hands and ask if he remembered their name.

They wanted to be seen, heard and reassured that they would not be forgotten. “It was awkward when I said ‘No’,” says Shona, “but I couldn’t remember everyone’s name.”

The team Shona traveled with came from throughout the U.S. and included two nurses, a psychologist, family therapist, nurse practitioner, dentist, minister, two teachers, a journalist, a photographer, and a quilting instructor.

They worked with six translators, from early morning until evening, with hundreds of children at ROP for almost three weeks. Shona assisted the nurse practitioner and dentist to give these children the first check-up they’d ever had in their lives.

“At first I took pictures and then I started taking their height and weight and testing their eyes with a wall chart,” Shona proclaims. “Whitney (the nurse practitioner) taught me how to look in ears and what to look for and Jim (the dentist) showed me how to record information about teeth and gums.”

Most of the children at ROP are in their teens and adopted the young American as their brother or “inshuti” (friend in Kinyarwanda). “Everyone has a story,” says Shona, “about how their life has been since the genocide. There was one kid whose parents and siblings were killed, except for a baby sister.

They were stuck on the street, taking care of the sister and eating rotten food until the director of the orphanage found them and brought them to ROP.”

His time at the orphanage was not all work and no play. “Sometimes I was just chilling with them talking, trying to communicate and understand each other. A lot of them are learning English and I picked up a few words of Kinyarwanda.”

Shona’s family also brought four suitcases of donated soccer uniforms they had been collecting from parents and kids back home and provided enough outfits and balls for four teams. Shona, who has played soccer since he was four years old, would make forays to play with his adopted brothers and sisters on the mud and rock-strewn field behind the orphanage and come back after twenty minutes dripping with sweat.

“Those guys are really good!” he’d exclaim, trying to catch his breath, as he collapsed on one of the thin wooden benches used by students during class.

The words “life-changing” are often thrown around loosely in our society. To Shona Blumeneau, the words are real. “This trip has changed my life,” he says. “I don’t think I’ll ever whine about anything again.”

His perspective on the privilege he enjoys in America was matched by his newfound appreciation and understanding of Rwanda. “Even though there is poverty, it isn’t as bad as people describe it. Most of Africa is poor, but there is also a lot of development and hope. The kids really want to learn everything they can. I have a lot of respect for them.”

When asked if he would like to return to Rwanda, Shona, who is now a high school senior, said quickly, “Absolutely! I learned that even though I’m in another country, I still like working with kids and I can do that anywhere, even if I don’t speak their language. I think I would like to work in the medical field and I love traveling.”

You can bet your last dollar that this determined young teen from the United States will indeed make his way back to Africa, where the orphaned children of The ROP Center for Street Children will hold his hand, look him in the eye and ask, “Do you remember me?”