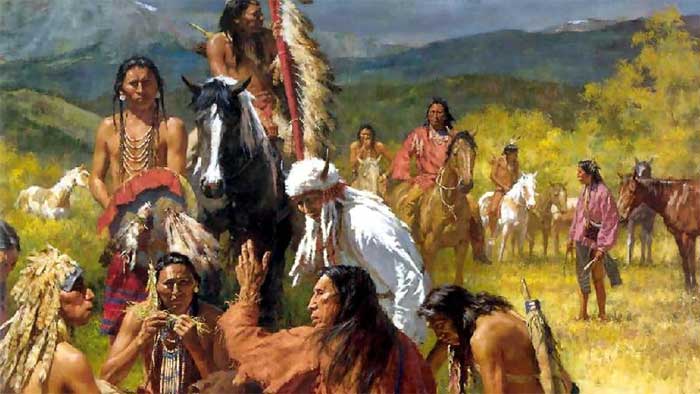 I grew up in the segregated North, in Redding California. Redding was mostly a lumber mill town when I was a child; a place people only saw on their way to somewhere else.

My father worked in the lumber mill for over 40 years. Besides the Native American family from the Hoopa Tribe that lived across the street, white faces surrounded us, including our own when we looked in the mirror.

We played frequently with the “Indian Kids” as people called them and often heard our “good” neighbors’ accusations and insinuations about “those kids” father having a “drinking problem”. “He is Indian after all,” they would say as if that explained everything.

As a child, I didn’t understand the bigotry or stereotyping that was occurring. All I knew was that their father was rarely home and if he was we had to be very quiet.

In the late fifties and early sixties, from the age of about six to nine, my mother started working part-time and hired a woman named Alberta to watch my sister and I at her home. Alberta was black and her husband, Lemuel, was a Baptist Minister.

They had two children, Albert and Brenda. They were probably the first black people we had ever met in person, let alone seen. They lived in a small dilapidated home in a run-down part of town. Later, as a teenager, I became aware that most of the black people in Redding lived in a poor section of town, literally on the other side of the railroad tracks.

Alberta was a big, dark brown woman whose loud strong voice could stop us in our tracks. If Candace (my sister), Albert and Brenda, and I were outside playing tag or hide-and-seek and Alberta called for us to come in, we didn’t linger but headed in as fast as our legs could carry us. She was strict but caring. I remember her giving us big warm hugs that enveloped our little bodies until it felt like we had disappeared.

Occasionally, Alberta would take us all to her husband’s church and we would play outside while she attended choir practice. We would all moan, along with the other black kids hanging around, about how boring it was and wondered when they would be done.

Albert and Brenda fought off and on, like brothers and sisters do, but never picked on Candace and I. It was in Brenda’s bedroom that I first heard soul music. I think it was The Supremes, The Miracles and “Little” Stevie Wonder. We would dance and sing and laugh at all our dancing and clowning around, until Alberta told us to “Quiet down in there!”.

After three or four years, when my mother had divorced and remarried, our family moved to a bigger home, farther out from town and we stopped going over to Alberta’s. Mom said they kept in touch with Alberta and her family for a while, but they eventually moved out of the area and she hasn’t heard from them in decades.

In the late sixties, I “went with” a girl who was black in high school. It only lasted a few weeks. At first I just followed her around until she noticed me, then we talked on and off and held hands once or twice.

She was easy to spot because she had a gigantic Afro and was one of only four black kids at the entire school. At the time, I was doing everything I could think of “against the establishment” and this was simply another way to proclaim my independence and spit in the face of convention. It didn’t really mean much to her nor I and I doubt if she would even remember it today.

What strikes me about all these experiences of childhood, adolescents, and as an adult, is that I, as a white man, have always had the choice of when and how I chose to interact with or befriend people of color or deal with race. Sometimes I have done so when it fulfills a need, is convenient, gives me a sense of having “helped” someone or fits my self-image of being an excepting, understanding person. It was for my benefit and I had control of if and when.

When I interviewed Lee Mun Wah, a well-known facilitator and videographer, for my book on transforming grief for social good, he said, “We don’t take the time to really look, to really experience. The American Indian is right when they say, ‘You want my customs, my rituals and my land, but you don’t want me.’

What we do is, we use people and cultures. We use them when it’s convenient, for a service, for artifacts. Rarely do we take the time to understand how we relate to each other.”

At times, I too, have not really looked or listened. I have put people in boxes and preconceived easily digestible categories that make life comfortable and lead me to believe that “everything is so much better nowadays than it used to be.”

And it is, in some respects, but it shouldn’t stop me from looking honestly at myself and not minimizing or candy-coating another person’s experience out of my own need for security.

In Notes of a Native Son (1953) James Baldwin wrote, “The black man insists that the white man cease to regard him as an exotic rarity and recognize him as a human being. This is a very charged and difficult moment, for there is a great deal of willpower involved in the white man’s naivete.

Most people are not naturally reflective any more than they are naturally malicious, and the white man prefers to keep the black man at a certain human remove because it is easier for him thus to preserve his simplicity.”

I wish things were simple. I wish just talking about race and prejudice was simple. I wish everybody was treated equally and had the same opportunities, but we’re not. The best I can do is not be afraid to look at myself and the person in front of me through rose-colored glasses and tell the truth as I see it, inside and out.

Nowadays, my friends who are black or brown are my friends because they are simply my friends and the same is true for our children and their friends. I don’t try to pretend, however, to myself or others, that everyone is now treated equally.

In our society (and most around the world), the color of your skin still matters. I’m not going to turn away from this reality and act like the privileges I have as a white man in America doesn’t exist. I’m choosing to look at this reality face to face and call other white men and women on it when they act as if everything has changed and they say things like “We’re all equal. It doesn’t matter what color someone is.”

Race matters. If you don’t think so, try walking around in brown or black skin for a while and see how you’re treated.

We have to acknowledge and respect our differences and take off the blinders before we can move beyond difference and see that there is only one of us here.