I had just submitted my manuscript, ‘Conservative Humour And Mad Men’, another of my satirical plays to my publisher, iUniverse, a self-publishing company based in the USA.

They have has published eight of my works up to date without a dime on my part as royalty earning when I heard what I thought was mere  rumour with regard to the burn-fire that had engulfed the city of London and which had spread to other parts of the country before anybody could say, ‘Wrong Politics!’ 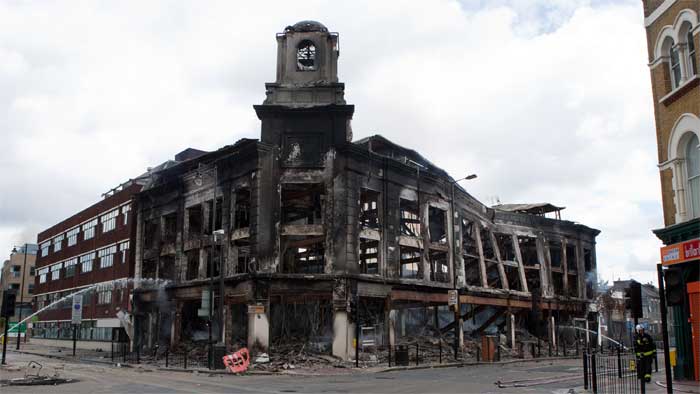 Was the work a prediction of what was to happen having being triggered off by the killing of Mark Duggan on that red, smoky day of fourth of August, by, perhaps, the irresponsible fingers of the British Police? Perhaps.

, a West Indian writer,  thought what took place first at Tottenham and later other parts of a diplomatically suppressed country was an insurrection of the downtrodden of the British people to drive home the discomfort they were beginning to be graced with since the Conservative/Liberal Democrat assumed power, and in some quarters born by past governments, a large spectrum of the populace disagreed with the writer that it was nothing near an  insurrection, but just some riots by some hooligans who had nothing better to do  than to unleash mayhem on the country.

And Politicians, as it is, they won’t like philosophers who will always have answers for all questions and situations, were quick to point out, perhaps to win public supports and sympathies that what happened on those dark days were sheer madness and ‘criminality’ and every peace-loving British must rise up to condemn it.

Even if the acts of violence that were carried out on those days was nothing to write home about as it was irresponsible and was something that should never be allowed to happen in the future, if I am good at reading in between the lines, I saw a country -even though was not happy and was shocked down to its pants by the riots-that was angry that its pride and arrogance had been dented by the burn-fire of violence which lot of people were quick to liken to what is going on in Libya, Syria and other parts of the worlds were men and women have taken the route of violence instead of the creative and beautiful act of dialogues.

The country mourned because its so-called civilisation had been tested and that singular test had proven to the entire world that the only best civilisation is a responsible politics where everybody is carried along, where politics is on the humble foundation enough to notice that while some eyes are filled with tears and desperately need attention others are dry and they can take care of themselves because they have access to everything that must be available to them.

It was not a good image on the country when foreigners who had come to the country to improve their lifestyle and standard of living thinking the beautiful and wonderful country was one where such violence could never have taken place, that it was a paradise beyond human violence had to changed the belief they had of the country and were roundly disappointed and I had a big, robust laugh yet again when the politicians gave the riots a political name, ‘criminality.’

They closed their eyes to the fact that something is wrong with the system, they refused to accept a part of the responsibility that even though the manner of the riots were despicable, they too should have a share-greater- of the violence. Maybe it is the stuff politicians are made of; put the blame on somebody else first before coming to terms with their sanity that they must get to the roots of the cause of the problems.

The question I asked myself when the riots was played down as ‘criminality’ was, ‘have you ever come across an angry man or woman who come to your door, knocks and when the door is opened to him or her, he or she would ask you to go on your knees for prayers so that God would accept you in His heaven to taste of His paradise and goodness?

Thank goodness the politicians are becoming true to themselves now that the reality is beginning to dawn on them that even though they have to treat some of the cases as ‘criminality’, they have to go to the drawing board to address he root cause of such gross irresponsibility.

The physical violence might have died down, politicians should not allow themselves be carried away that the emotional violence is still locked up somewhere and it might again be birthed and enjoy the degeneration of what happened few days back and probably worse.

Every responsible country and government know that for any country to grow and stay alive it has to curb wastes and if these wastes have to be curbed and reduced, they have to be done responsibly and not hypocritically.

The Prime Minister, David,  is adamant and stubborn as ever about actualising his miracles of cuts and structural adjustments to save the country’s economy, good,  but should he do this to the detriment of many and the joy of a few?

Dave Prentis, of the union Unison, described the Government cut in the Evening Standard of Wednesday 17 August as ‘savage’ and its strategies aimed at achieving this savagery,  ‘is in tatters’.

I was with an eighteen-year-old young man the other day from Moorgate and where we met was not the place he had been, I told him he should be in school studying and he told me he cannot be in school studying because the school fees are so high that the only alternative left to him was to be where I met him. I wish the PM should listen to this and do something about it.

The Politicians, having climbed down from their arrogance and high horses described the ‘criminality’ that took place on that day as a result of ‘moral break down in the society.’

Broken down by who and what? I think it is one question the PM and his boys and girls will have to look into and thoroughly too. You do not take the pampering of a child to the extreme only for you to wake up one day and decide you must remove the cushions from their bums suddenly without they telling you cannot.

A society where empty brains are celebrated as celebrities, where money is the God of all, where the hard-working poor are heavily taxed and the rich can go on holiday anywhere in the world, where a sixteen-year-old can tell a police officer, ‘F**k you, I am sixteen, you or the law cannot touch me.’ A society that produces nothing and her children are jobless… And I was told, you do not throw a stone when you live in a glass house…

And I forgot to mention that after the unrest, there was something I observed as I walked the streets and roads of the cities to see the extent of damage that were done; my observation might be wrong, but I discovered that Bookstores and Libraries were left untouched, which made me to think that those boys and girls might not just be another criminal as Politicians would like us to believe, that they were a angry yet thoughtful citizens of a wonderful country whose only interest was to send a message to the ruling class led by David Cameron

that ‘If David is not ready to spend and make the youth to be useful, they were going to force David to bring out what he has saved and be forced to spend it.’

Nonetheless, let us just pray that the intolerable violence

of previous days does not repeat itself even though the emotional violence is still very much there! Alive.

Back in the Saddle Again!