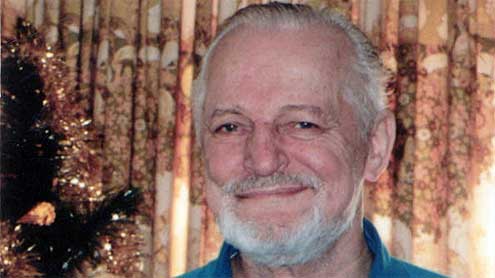 In 1935, Schmielewski became a disciple of Sri Bhagavan Satguru Babgi Maha Avator, who is the root Guru of the Giri succession of masters and grandmaster of yoga, one of the Asiatic immortals.

Two years later, the sage had Schmielewski join a school for children with paranormal, congenital gifts, where he developed his psychic abilities.

Between the ages of 10 and 14, Schmielewski would go to the Merry Go Round Amusement Park at Spreewald.  Here he used his advanced mental abilities to fix and win at the wheel of fortune type game, shooting galleries, and dice tables, leading him to win lots of prizes.

During World War II, Schmielewski would warn friends, family, and even strangers where not to go when the allied forces dropped bombs on Germany.

He wanted them to survive and not face a horrific, fiery death. Some people, however, thought he was mad. “My own father,” he wrote in his online Autobiography, “was frightened of my abilities and threatened to shoot me with a gun to make me silent at such a time.”

Schmielewski then kept silent to avoid the suspicion of the Nazis.  That school that Schmielewski attended was kept hidden through the ingenuity of its rector, who portrayed the education location as a perpetually bankrupt artist-type school that needed constant donations.  Thus, the officials would avoid it, keeping the children safe.

After the war, Schmielewski went back to live with his family. He then went to the Berlin Academy of the Arts. In 1952, he met his late wife, Bianca Rogge, a famous dancer. They then immigrated to Canada, where his wife started a school of modern interpretive dance and he founded the Yoga Forum of Canada, where he taught yoga.

They then moved to Australia and visited Europe.  Somewhere along the way, Schmielewski went alone to Hong Kong, Chiang Mei Thailand, India, Cairo, to Paris, and then onto West Berlin. When they returned to Canada, Schmielewski predicted many events, including the Kennedy Assassination. He also wrote the Western Book of the Dead and The Gospel of the Twentieth Century.

In 1971, he went professional as a psychic.  He went to New York and attended the psychic fairs circuit, meeting the wives of the well to do which led to big names on Wall Street. This led Narayana to be hailed as a Wall Street Super Psychic. At the death of his wife, he returned to live in Germany. He then came back to Toronto.

During his psychic readings, he would tell the good things and bad things about the client to their face, all blunt and exact like the Good German he was. His intent was to make the individual see themselves in a new light.

He adopted the name Alfred Narayana because a Berlin publisher did not like his given name. When I met Narayana in 1995, he lived alone in a home in Mississauga, Ontario. In his main room, he had three signed and framed thank you letters from Brian Mulroney, before he was prime minister, when he was in government, and in his retirement years.

“I never worked a day in my life,” he told all his clients. “When I first met Mulroney, he was age 33 and had just failed his law school exams and was driving a fish truck in Baie-Comeau, Quebec.” To me, Narayana was an imposing 6 foot 7 man with a deep voice. He was much like an actor from the Broadway stage–he was larger than life.

His clients were from the political world, movie and music business. He read prime ministers, ambassadors, and other celebrities. “I met Madonna,” he told a friend of a friend, “She is actually quite ugly in person, not beautiful at all, but she is a good businesswoman. You should be a good businesswoman like Madonna.”  What an encouragement.

According to this article, just after 3:30 pm, a couple showed up to view the house.  Seconds before 3:50 pm in Narayana’s basement the prospective home buyers and the real estate agent heard an exchange of voices, then a series of pops, followed by what sounded like someone dropping to the floor above them.

They ran upstairs and found Narayana’s crumpled just inside the storm door of the home, smoke from the gunfire still in the air. He’d been shot multiple times in the head at point-blank range from a slight upward angle, not surprising given the yogi’s stature. Gunshot residue was found on his face and chest.

Detectives went back to his yoga studio days and spoke with former students, psychic peers, and everyone who’d ever dealt with him. “We interviewed well over 900 people who knew him or were his clients, administered about a half dozen polygraph tests. It was an incredible amount of work, but we came away with frustratingly little,” the police told the same media publication. “Except for the one phone call, we never came what I’d say was close.”

On day two of the investigation, a call was transferred into the homicide office from the Peel Police switchboard. The lead investigator just happened to pick it up. “The caller said they knew a person who knows the killer’s ID but is deathly afraid of coming forward,” he recounts. He still avoids identifying the caller’s gender on purpose: one last hold-back for investigators.

Over the years, before his death, Narayana conducted classes on philosophy, including Yoga courses. A number of clients were invited and became his group of devotees. Whenever he needed a chore to be completed, one of them would be asked to complete such a task.

They came to be called his Group Members. To outsiders, they would come across as kooky, enlightened characters, whatever your choice of words. In time, they bonded and knew each other as family. There was said to be an initiation process to join such a small organization of individuals. At the funeral, everyone had a perfect alibi.

If you were an unlucky bystander in such a circumstance, they would pounce upon you, suggesting you were a possible suspect in the then coming murder investigation.  Some of these people were polygraphed but still, their weirdness only added to the perfect murder mystery.

In time, I conducted an interview with Michael Telstarr, a paranormalist and an escape artist, who had his own theory. “He was a tall man who was always sharply dressed,” Telstarr told me in a downtown café, “He was always flying around on someone’s private jet, reading some bigwig. He knew something and that is why he was done in.”

So Narayana knew prominent politicians, business leaders, movie stars, and rock stars, including some celebrities. He had Group Members to alleviate the loneliness of such a profession.  Someone wanted him dead.

Gregory Henry Waters, a long-time associate had his own opinion.  “He did not believe in telling people about his abilities because it would not help society,” Waters told me VIA email, ”Like Christ did so many cures,” he would continue, “ but society never changes so he thought doing these kind of things would only bring personal praise to himself which he believed was not his goal.

He was interested in bringing the truth about the divine life to western culture from his personal experiences as a yogi not from out of books.”

Narayana: When the human child is born, it contains in its nature a few seed-like potentials:  A seed of consciousness, a mind, a spirit, and a soul.  Few men undertake the immense labours needed to give birth to these things.  For most men are naked apes.  Although they may look like men, they are apes beneath the surface.  Only very recently in evolutionary History did these apes lose their fur.  For many are the naked apes and few are the true men.