I’ve always been uncomfortable with the idea of the European Union since it was first postulated and formed. To me, it is nothing more than Adolf Hitler’s insane dream come true.

He wanted a united Europe under German leadership which he named The Thousand-Year Reich to control all aspects of Europe and its country’s populations. 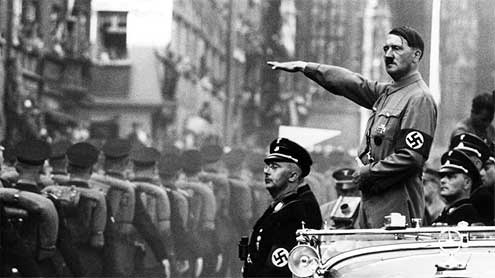 While Europe may not be the fascist state he hoped for, if he was still alive he would undoubtedly approve of Germany being the key player when it comes to what is said and done.

With France agreeing with everything Germany says as you would expect from a weak-kneed sycophant, while the rest of the countries simply tag along behind hoping for crumbs from the negotiation table, not wishing to upset the two most powerful members, Europe is fast becoming a collective of sick states.

Why all politicians support such a warped concept defies all logic.

Very few countries abstained from joining the union. Switzerland is the shining example of courage and common sense prevailing over blind stupidity.

While the UK is technically in the union, we have not fully integrated into it thank goodness. We are subject to the EU’s mindboggling number of ridiculous laws – many of them simply defying all logic. Then there is the fact that as a nation we suffer from the totally legal freedom of movement by EU citizens.

While we have millions of our own out of work, who are harassed by our government because they cannot get a job, people from other EU nations freely enter to take up those self-same jobs.

Despite all of this somehow or other we still retain a certain degree of autonomy, not to mention our own currency which many of our neighbours on the Continent dearly wish they still had since being forced to accept the Euro. Our Prime Minister David Cameron recently went on record as saying that after the next election he will give the country a simple yes or no choice to stay or leave the EU in the form of a referendum. I’ll believe it when I see it. A week is a long time in politics let alone a couple of years…

While the idea of an amalgamation of states undoubtedly works in a relatively new country like the US, wishing former sovereign countries to become nothing more than vassal states within a political alliance for the mutual benefit of all, as well as adopting one currency, is simply asking for trouble.

Think about the recent financial collapse of Greece, Ireland, and Spain if you need examples. Expecting various countries to all have the same approach to how their countries are run is plainly insane. Italy may be the next nation to fiscally fall by the wayside unless the EU is not careful.

Here in the UK, all the indicators currently point to us still being in a triple-dip recession, something which the average man on the street has known for ages even if our idiotic government vehemently denied it until it became the main headline on the BBC six o’clock news (01/25/2013.)

To the rest of the world I merely say this – be careful what you wish for, it may yet become reality…

Amanda M Thrasher Feb 8, 2017 0
Find your Own Voice I am a writer first and foremost, author second to that. If you know me or have heard me…
Writing