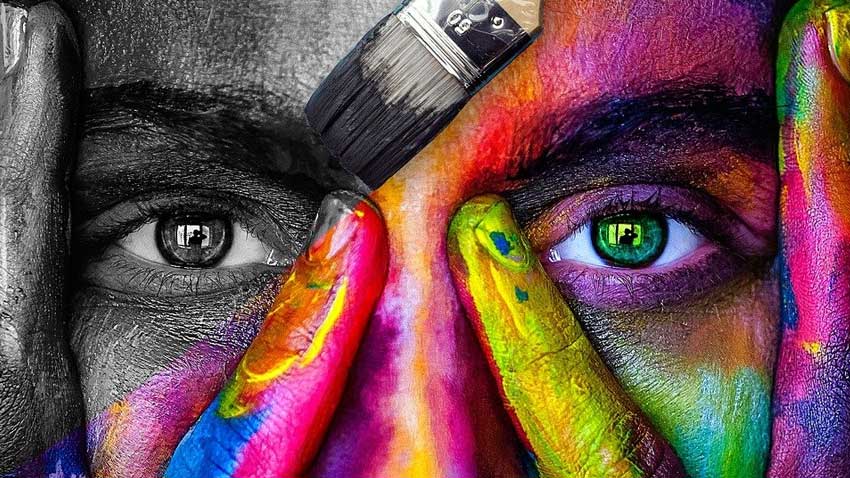 I summon my muses around 3:00 a.m. – when they are but shadows, neither white nor black; really no color at all. They fill my mind with words to fill a blank white page. One morning out popped the thoughts of my poem called White-on-White.

I was inspired to turn my poem into an article. Poetry does that. Words are like shorthand for the soul. Procrastination takes away our chances of making use of our ideas intended to feed our spirit.

The scientists argue that color can do whatever black and white can. Some even say white is the blending of all colors using the example of the rainbow. It is also believed neither white nor black is a color. Both are actually the absence of color. The color of our skin can even affect our daily lives, as seen in Ferguson, Missouri, in Michael Brown’s killing.

He will go down in history just like Martin Luther King, Jr., spurring uninvited protests across our Americas. Black-on-Black, Black-on-White, or White-on-Black is very sad.

says, “I look to a day when people will not be judged by the color of their skin, but by the content of their character.”

Color more than identifies us; it is like adding our finishing touches. Color gives us vibrations in the soul. It gives us rouge in our cheeks and fire in our eyes.

Color is also like a magnet. It is not only a determinate but also a terminator. Our choice of colors can also define us as humans. I have only one color, and that is to inspire others. Without colors, we would live uninspired, ungrateful of the beauty that is Mother Nature, with its beautiful butterflies and wildflowers that not only color but also perfume our lives.

As for White-on-White or Black-on-Black, I would not know if I were winning or losing shuffling through a deck of solid white or black cards. Candy Crush would now be boring with the many colors that tempt us. We could not write or read, watch TV or films. We would have to memorize everything. For writers, our lives would be halted.

We could not play Scrabble nor Word Games. How would life be without the Simpsons or other cartoons, whether written or in a film? We would not know when to slow or when to go.

Finally, I wonder why humanity’s commonality and/or differences are not applauded more. We all are created uniquely in the warm sunlight or cool in the evening breezes when our shadows follow us around. We were created with just the right genes to take us places…the internet says, “…friendShip, companionShip or, relationShip isn’t taking you anywhere, abandonShip.”

Back to my poem that begins:

Can you imagine white pigeons cooing and cawing, hiding from white cats, hurling and twirling themselves into the air, all for naught? And I am thinking about white birds, looking for white worms crawling around in white grass. All their white bellies hungry – for the prey they cannot see to catch. In the matter of white rolling seas and a white sailboat in distress, how would it be saved?

How would we be taught our ABCs with white chalk on a white chalkboard? Color does matter for humans. They can live without many things, but who can happily and safely live without nature’s colors of red, yellow, orange, blue, green, black, and brown? Chris Rock jests, “Yeah, I love being famous. It’s almost like being white, y’know?”

I found wonderful quotes on color but few articles. C. JoyBell. sure has a handle on color, saying, “We are all equal in the fact that we are all different. We are all the same in the fact that we will never be the same. We are united by the reality that all colors and all cultures are distinct & individual. We are harmonious in the reality that we are all held to this earth by the same gravity.

In the Twentieth Century, (Frankenstein-like) Scientists right now working on Designer genes for our future children. They say there may come a time not too long in the distant future when procreation will be for entertainment purposes only.  Who would be deciding what color we wanted our children to be? Would we trust anyone enough to gamble with our children’s future?

If we were all white or all black, would we be less or more criminal intended or needy, greedy, and/or competitive? All our attributes and vises would be scrambled in a test tube. The consequences of playing God are a scary deal.

Many latent anxieties are dealing with African-Americans and other minorities bubbling to the surface nationwide after the killing of Michael Brown by a Ferguson, Mo., police officer.  Guns do not kill – people do no matter what color they are.  It has been said, “If you’re white and you’re wrong, then you’re wrong; if you’re black and you’re wrong, you’re wrong. People are people. Black, blue, pink, green – God makes no rules about color; only societies make rules where people suffer.”

To sum up, I wholly agree again with C. JoyBell

Rather, we ought to glory and shine in all of our differences, flaunting them fabulously for all to see! It is never conformity that we need! We need not conform! What we need is to burst out into all these beautiful colors and hug each other, especially the young and old of us.”

My Poem: White-on-White
I like to play the what-if game. How would we live in a world without color?

When shuffling in my mind, I imagine I would not know if I were winning or losing with a deck of solid white cards or a set of white checkers, without colors I would not know when to stop, to slow or go, I think about all the beautiful flowers and butterflies and what their colors mean to me. I am also thinking about white pigeons cooing and cawing, hiding from white cats, hurling and twirling themselves into the air, all for naught,  and I am thinking about white birds, looking for white worms crawling around in white grass, and all their white bellies hungry for the prey they cannot see,

I am thinking of white sea-caps on white rolling seas and a white sailboat in distress; how would it be saved? How could we be taught our ABCs with white chalk on a white chalkboard? We can live without many things around, but who can happily and safely live without nature’s colors of red, yellow, orange, blue, green, black, and brown?

Suppose our children would be designed in test tubes? Then there is the ozone thing. What will humans be like if all is bad becomes true sometime in the far future? We would wake to find:

Without color Mother Earth would be damn mad now, her rain forest so beautiful and strategically placed are gone because men needed toothpicks and chairs to sit their lives on, looking out my window, my light-sensitive eyes detect a protective plate glass between me and the warmth of the sun, as it is fatally dangerous now with no ozone layer in between, it seems now the fields of corn, wheat and all the good things we love to eat are gone, no green grass, only clay, and sandy ground cover remains.

No cows, milk, chickens, nor eggs, only nutritious red and orange chemical capsules with added steroids to purge on, Not Russian nor USA, nor Chinese, everyone imprisoned yet saved. Only unisex babies are born now, incapable of love or emotional thirst, sexual preference and degree of intellect are now a matter of scientific design; those men and women who remained true are considered genetic mutants and can be found in a new kind of zoo. Humankind now practices levitation and uses much more of their brain. There is no need to talk or sing and be described as open vacuums of knowledge with Mona Lisa-smiles.

The Philosophy of Creative Writing 3

The Philosophy of Creative Writing 2

Paul Collins Aug 10, 2013 1
Tobias Smollett Tobias Smollett was born in 1721 to a Scottish Presbyterian family and went to university, where…
Artist Spotlight