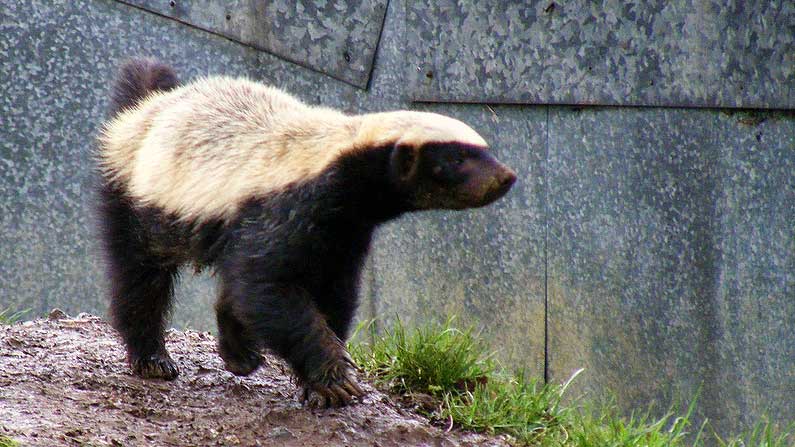 It’s not the atomic or hydrogen bomb. It’s something more insidious. It is…wait for it…the Honey Badger!

I’ve been to South Africa but have never seen a honey badger when there. Then again, I was in urban and suburban areas, probably not popular honey badger territory.

I first learned about honey badgers in a documentary I saw on my local Public Broadcasting Station. They presented a show about an animal reserve near Kruger National Park.

They are some of the most intelligent animals you’ve ever seen. Also the bravest, to the point of recklessness. They will take on rhinos, giraffes, lions (Stoffel had to spend two months in a veterinary hospital for losing a fight with a lion. Didn’t stop him from chasing the lions after he got out of the hospital). Getting Stoffel, a girlfriend did no good. He just found a partner in crime to make trouble. In the end, Brian Jones had to put Stoffel in an enclosure with an electric fence.

A local beekeeper tried to invent a hive the honey badgers couldn’t get into. No such luck. They aren’t called Honey Badgers for nothing.

The reserve takes in honey badgers local farmers capture and tries to release them in the wild far away from the farmers, who would otherwise kill them.

The show was amusing, the honey badgers so intelligent they are fun to watch. I would say I am going to discuss a more serious note, but I would be lying.

Watching the honey badgers, it dawned on me South Africa had a natural weapon of mass destruction. Who needs nuclear weapons. South Africa could breed them too. Want to take out ISIL? Drop a million honey badgers in occupied Syria and Iraq. Game over.

I think my cat Pandora has met her match.

My Cat is Eating me