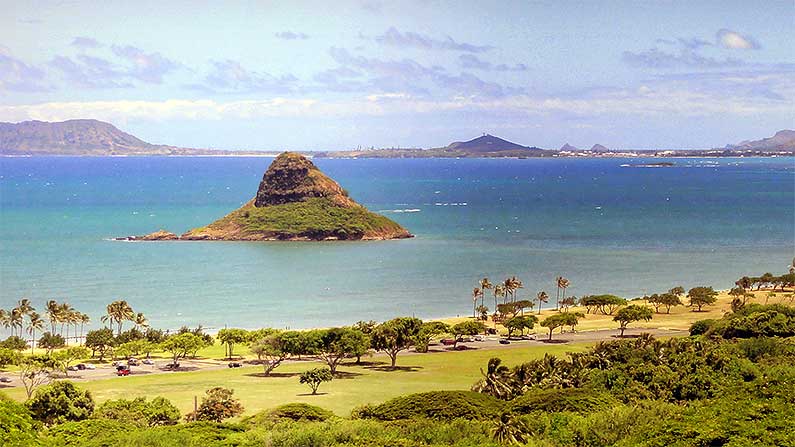 “Hang loose. You’re in Hawaii.” When it took three full days to unwind from the frenetic pace of the mainland world, it became apparent that Hawaiians knew something the rest of us had forgotten: how to relax.

Oahu is a small island with a population of nearly 1.3 million, where Honolulu is a city as busy as any other, and Waikiki’s roads bustle with people and traffic. Tour buses on tight schedules wait their turn at clogged intersections, their drivers intent on making their destinations but somehow lacking the typical aura of stress.

Jason of bus Number 3 is a driver for the Whale Watching tour. He winds through Waikiki, picking up tourists at their hotels, his Hawaiian shirt ablaze with the color of the sun. He sits behind the steering wheel waiting for the bus to fill, serenading the guests with verses from I Can’t Help Falling In Love With You as he tenderly strums his ukulele for accompaniment.

“Aloha! Welcome to the Whale Watch.” He adjusts his coconut shell lei. “You will never find another bus driver like me!”

The Navatek I, a whale-watching vessel, waits in the harbor, the same port from which the Skipper’s boat in Gilligan’s Island set sail. It carries its passengers past the Diamond Head crater on a gentle sea. It is December, and the 45-foot long, 80,000-pound humpbacks are in Hawaii for the winter, having traveled over 3,000 miles from Alaska.

Two blows shoot high into the air simultaneously, and dorsal fins and tails break the surface. Professional photographers with telephoto lenses as long as their arms perch near the front of the Navatek, snapping multiple exposures per second. The entire crowd scans the dazzling ocean. Will this be the day they see a whale’s body rise two-thirds out of the water in a classic breach?

Tourism is Hawaii’s primary industry, followed by the military and then agriculture. There are eight main islands in the chain with 132 islands in total. Waikiki itself is only two miles long and six miles wide. Wai stands for “freshwater” and kiki means “spouting,” so Waikiki literally translates as “spouting water.” In 1920, it was the largest resort in the Pacific. It continues to be a paradise with few bugs and almost no mosquitoes.

What would a trip to Hawaii be without a visit to the Polynesian Cultural Center? The tour guide this time is Kalili.

“Here in the islands, you’re automatically adopted to the family. That’s why he’s cousin Micah.” Kalili points to the driver. “We’re all cousins.”

The bus leaves Waikiki behind and rolls past rock formations, trees, and mossy meadows to the west side of island, where rainfall amounts, at about 150 inches per year, are three to four times what they are in Waikiki.

“About an hour, hour and a half to the Cultural Center, depending on the construction,” Kalili informs the tourists. “But we’re lucky today. Micah here, he has a heavy foot. So maybe an hour.”

En route, Kalili points out a valley where the stampede in Jurassic Park was filmed. He goes on to explain the meanings of important Hawaiian words. Aloha means “hello,” “goodbye,” or “love.” Mahalo means “thank you,” and lei stands for “friendship,” “love,” and “respect.” Twenty years ago, only 40 people could speak Hawaiian. Today, after cultural restoration, they number 2,000.

Kalili drills the captive audience on the bus. “Does anyone know what year the US became part of Hawaii?”

It takes a moment for the wording to sink in.

The ocean, with a pleasant temperature of 76ºF year-round, was the Polynesian way of life until livestock was introduced. Nesia is from the Greek term meaning “collection of islands.” Polynesia literally means “many islands.” There are seven tribes of Polynesians, with Hawaii being the only group north of the equator. Kalili is from Samoa, some 2,600 miles southwest of Hawaii.

The Polynesian Cultural Center, established in 1963, is a spectacular all-day event consisting of cultural dances in a boat parade, tours through reconstructed native homes, and a chance to participate in tribal games aimed at honing children’s hunting and battle skills. Afterward, the tourists are floated down the river by canoe to the evening luau where guests are adorned with fresh flower leis.

The original Hawaiian leis were not made from flowers but rather from coconut shells, like the one worn by Jason the ukulele player. Orchids, which had to be imported, are used for flower leis because they last as long as three days.

A visit to the U.S.S. Arizona Memorial is a reminder of the 1941 Pearl Harbor tragedy. Today, Oahu still has a strong military presence.

Hawaiian people are proud of their unique home and do everything they can to keep it the paradise it is. The cities and countryside are pristine; there is no garbage or graffiti. Very few people are seen smoking cigarettes. Goodwill abounds. On the evening of December 26, 2008, this was put to the test during Oahu’s 12-hour, island-wide power blackout.

The International Marketplace in Waikiki was hit on one of the busiest shopping days of the year. But there was no looting and no screaming in the dark, only a systematic shutting down of market stores by flashlight under a starless canopy of trees.

Of course, one of the main attractions of Hawaii is the beaches. Catamarans set sail from the Waikiki shore, taking tourists out to sea for an hour or so at a time. The Kepoikai II, run by Dave and Cody, hoists its blue and white sail as it catches the breeze on the afternoon of New Year’s Eve, gliding easily into the glare of the sun. True to the meaning of its name, the Kepoikai II catches the “crest of the wave.”

After spending time in the islands, a visitor cannot help but relax and “hang loose.” In Hawaii, you’re not judged. You are ohana. You’re family.

© 2009 Eva Blaskovic. All rights reserved.
All names and quotations were used with permission. Information was provided by tour guides mentioned in the article and by personal experience.

Can Your Child Picture Time?