Well, I left home right after High School and join the US Army on June 9, 1969 the day after my 19th birthday. My first time away from home came six months into my service.

Where I arrived in Vietnam two weeks before Bob Hope’s Christmas show got to Long Bin compon about and hour north of Saigon, South Vietnam, where early Christmas morning you could hear Silent Night being sung across the valley between three out-post.

The Christmas I remember that was real special came a year later while I was home on Leave from being Station in Fort Ore, CA. On December 4, 1971 my parents, baby sister & I were in a car wreck that almost kill the whole family. It was on a Saturday morning we were headed north on Hwy # 97 out of Klamath Falls, Oregon to take my baby sister back where she stayed, when 12 miles out of town we were hit head on by an older couple driving a 4×4 pick-up that lost control on black-ice. 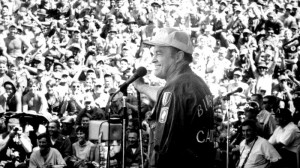 There was no place for my father to go to avold the truck for right behind it was other cars traveling down hill as we were going up. Out of the six people in this acident all lived, Amen. All but my baby sister had long Hospital stays. I was the only one in the two vehicles that had a seat-belt on. Plus was the only one awake right away. As I kick the back door to my Dad’s car I check on my parents then the two that were in the pick-up that hit us. Got a Logging truck driver to stop, where he had a CB-Radio & he contacted the Oregon State Police & EMT’s.

As I ditected trafic I give a report of the accident the the State Trooper & told the EMT’s who was hurt the worst. I was ten told to go & sit in the Ambulance to get warm. That’s when I found I was hurt more then I thought. Where I had said all I had was a Bladter problem & through something out in my back. After they got all of us to the Hospital in Klamath Falls that’s when I was told the Setbelt broke my L-4 Vertabra. Where I didn’t beleive the ER Doctors until they show me the X-Rays. Once I was able to travel the Army wanted me in their closes Hospital which was Ft. Lewis, Washington. where fors days before Christmas my Doctor asked to see me.

It was the first time since the accident that I had a chance to walk but I ran to see my Doctor. The young nurse said slow-down you might fall. I said catch-up & I won’t fall. Anyway God had heal my back so well the the Doctor had to asked me where the Fracture was. He put me in a cast shaped like a turtle shell where on Dec 23 the same nurse asked what was I still doing in bed when I was going home for Christmas from the hospital. I told them all would be fine but what close would I ware since nothing I owned fit any more with the Casted.

They had it covered & got me a Class A Uniform to fit over things, by Christmas I was walking into the same hospital my mother was still in since she was hurt the worse. The Doctor I had there at Klamath Falls was getting off duty when he saw me walking up the hall. He Said: I should of listen to you…My thinking you’d be tied to a bed for a year or better before you ever be up walking around. We were able to have a Christmas party for my Mother & Baby sister with her mother came in from out of town. My healed so well it never took me out of the Service or the Combat job I had of Armor Reconnaissance Today the same Spirit of the my Lord Jesus & Christmas keeps me going 24/7 365 days a year. Where my love for rebirth, the Lord Jesus’ Peace, Joy & Love can be experince by all. May all fine the Love, Joy & Peace that my wife & I have found. It can’t be bought by no amount of money but it can be shared my those who know,

Jack Eason Oct 23, 2011 2
How Storylines Sometimes Develop: It happened to me yesterday afternoon while I was busy outlining another…
Publishing