The Mayan civilization captured the attention of some folks recently with the “end-of-the-world” predictions caused by the ancient Mayan calendar.

You can believe the doomsday criers or not, but the fact that the Maya were pretty smart cookies is something that most archaeologists do agree upon.

The Maya were interested in mathematics and astronomy and various other disciplines. They closely observed the earth’s seasonal cycles and the phases of the moon, recorded eclipses, and even tracked the planet, Venus, as it moved across the sky.

Yes, the Maya were pretty smart, but what if they knew even more than we can reliably document? What if they also had the power to control events around them? Now, I am not saying they did have that kind of power, but as an author of fictional works, one of the things I ask myself, especially when writing a paranormal, is the question, “What if?”

What if the ancient Mayan symbols were more than just interesting designs? Each symbol has a name, such as the Way, which also means the Companion Spirit. What if this symbol had the power to direct you to your own companion spirit? You know…the person you were meant to be with. With this came the germ of an idea that led to my book, MOONLIGHT AND ILLUSIONS.

Taking this a step further, what if a Mayan symbol could give a person power…real power? Well, who would want this type of power? A magician would. If he had the power to move things with his mind, he could become rich and famous. I had the hero for my book!

In the 19th century, Stephen Elliott, The Illusionist, is given an ancient Mayan stone carved with the symbol for Companion Spirit and told it would bring luck, but he has to keep it out of the moonlight. But, of course, he doesn’t listen…isn’t that just like a man? The moment the Companion Spirit is exposed to the moonlight, Stephen is a changed man, a powerful man, a REAL magician. But with this power comes immortality, a never-ending existence called “athanasia.” Riches are his, but so is loneliness. Everyone around him ages and dies, but he lives on. The power belongs to The Illusionist and it is accompanied by an overwhelming, physical need for the moonlight.

As the world gets caught up in World War II, no one wants to be entertained by a magician. Everyone’s mind is on the war. Stephen is no longer in demand. He is broke, alone, and doomed to walk the earth forever dependent on the Companion Spirit and the moonlight until another person, a woman, is accidentally cursed by Stephen’s ancient Mayan stone.

Can they find the answers they seek or is an endless existence theirs forever? Here is an excerpt from MOONLIGHT AND ILLUSIONS.

“I will be placed in a straitjacket, just like Harry Houdini.” Two men came up and began strapping him in and buckling the straps behind his back. “Then hanging from my ankles, I will be lowered into this box.”

“The box will be flooded with water,” he continued. “I will attempt to escape before drowning, and before the rope attached to a blade above the box burns through.”

The crowd tittered with excitement. Ropes were wrapped around the magician’s ankles and the assistants, in full view of the audience, hauled on the ropes and pulleys to pull the tall man upside down. They maneuvered the box under him then lowered the man head first into it.

Anabel’s heart pounded even harder when she saw them secure a second rope holding a two-foot-wide curved blade over the box. One of them lit a kerosene lamp near a taut section of the rope supporting the blade. Water from a hose started rumbling into the glass box, covering the magician’s head first.

She held her breath as he began moving. The spotlight shimmered on the wicked blade suspended directly above his feet. The water climbed to his waist.

Anabel watched, fidgeting in her seat. The urge to run on stage, grab the axe from the waiting aide’s hands, and free the man was almost unbearable. Her gaze darted from his calm face to the burning rope and back.

With an audible “pwang” one rope strand broke. The deadly blade vibrated. Anabel wiped her perspiring hands on her skirt. The magician wiggled and squirmed until the straitjacket came off and his arms fell free. Bubbles rose through the water. His long dark hair undulated as he lifted his upper body to work on the ropes securing his feet.

The smell of burning hemp filled the theater. Stephen freed his feet and pushed up to the surface of the water, but before he could climb out another strand of rope gave way. The rope broke. People screamed.

Anabel jumped to her feet. “Where are you going?” Julie whispered and made a grab for her hand, but she pulled free. “I-I have to help—” In the back of her mind, some semblance of propriety made her hesitate, but she ignored it, climbing over the people in her row in an effort to reach him. 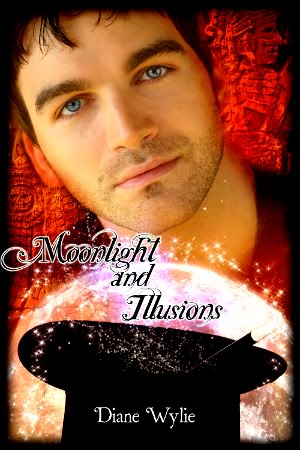 When she made it to the aisle, she saw him, still in the water, stretching both hands over his head. The blade had stopped in mid-descent, just a foot from the magician’s upturned palms. She froze, open-mouthed in shock. A woman softly wept somewhere and others murmured as they all watched.

The Illusionist forced the heavy steel blade higher without touching it. Using one hand to control the blade, he climbed out of the tank and down a ladder until he stood on the stage again. Water streamed down his now-transparent white shirt and clinging trousers to pool at his feet. Visible now was the silver pocket watchcase hanging from the chain around his neck. Confirmation! It is Stephen Elliott!

Now, with both hands, he guided the blade down until it floated above a pumpkin placed on the floor.