Well, Jolly old St. Nicholas, (Santa Claus) has a kind heart for everyone, including the poor – so, on his travels out into the country, where he knew about three young girls, he went to their rooftop and threw three pieces of gold through a smoke hole.  Back then, the poor did not have chimneys – the three pieces of gold landed inside the sisters’ stocking which were hung near the fire to dry. 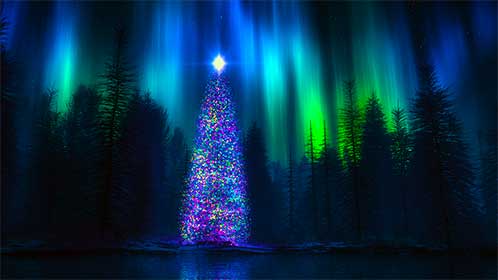 The next morning, the poor children were not expecting anything in their stockings, so they were elated and jumping for joy when they reached for their stockings to find gold pieces.

So this wonderful Christmas story began to travel all around the country, and people began hanging their stockings above the fireplace hoping they would not get a piece of coal because they were so bad during the year.

Somewhere in time, the link between Santa Claus, stockings, and the birth of Christ became linked together.  Following this old story, people began placing their money into stockings – before the legend – people used shoes for their savings.

What made the Christmas stocking so famous was from a famous artist, Clement C. Moore, “Visit for St. Nicholas.”

The Christmas Tree
First, we have to return to the 4th Century when Christmas would be celebrated as the birthday of Christ on May 20th and the Church began celebrating the birth of Christ on the 25th of December.  It was the festival of the season of the winter solstice in honor of Saturn, god of vegetation and husbandry.

The tree meant the renewal of life by Norse mythology, its’ branches, and roots they said joined heaven, hell, and earth.  The green tree was the emblem of immortality

Think about the Egyptians, they never had a Christmas tree but instead used palm branches and each one had 12 shoots, each shoot represented a month, and the victory, once again, a completion of one year over life and death.

The Romans, at the time of “Saturnalia” would decorate their home, plants, trees, and instead of what is now a tradition with ornaments, Romans hung religious gods on the branches.  No battles fought, schools were closed and punishment of any kind would be set aside for another day; known later on in history as the carnival of antiquity, and their pursuit of pleasure.

The Jews celebrated the feast of lights, for eight nights they would light a candle on the candle holder with eight spots.  The tradition remains the same.  Some families give the members of their family a gift for each lighting of the candle.

So in comes Christianity and knowing about all the old traditions they could not change them but they added to them.  They believed in the Christmas, green tree, with lights, and quoted the prophet Isaiah “righteous branch” and “the glory of Lebanon shall come unto you; the fir tree, the pine tree, the box tree to beautify the place of My Sanctuary.”

Scandinavians tell of two lovers and violent deaths, and where it happened was a beautiful “service tree” as it was referred too, were out of blood-soaked soil

came to this tree.  It is told flaming lights appeared annually.  Nothing could put out the lights.

Germans tell about the Oak tree and its’ night, on Christmas Eve, when it fell.  At the same time ridding of the pagans, St. Boniface arrived in England and presented a fir tree as a symbol of a new faith, Christianity.

Another old legend from the Germans came from a man Martin Luther, walking home in the snow on Christmas Eve – he was a Protestant reformer.  What moved Martin was the beautiful sky and what seemed to be thousands and thousands of stars which glittered.  He returned home and tried to tell the story of the stars in the sky, but just couldn’t do so with words so he went into the yard and cut a small fir tree.  He would then light each branch with candles

As we know from Germany the custom of the Christmas tree spread all over the world but the British was hesitant to adopt what the great writer Charles Dickens described as “the German toy.”  It would not be until 1841 when the young Prince of Wales remembered his wonderful home in Germany and placed a Christmas tree in Windsor Castle.

America, we have changed some of the old tradition – it use to be the tree was never decorated and placed inside the home until Christmas Eve, but now, the trees are tagged, and cut weeks ahead of time, decorated for various parties, and even gifts to entice the children are placed beneath a tree – gifts for others, not Santa’s gifts.  The tree would be lit every night someone was home, but, in this day and age, the tree remains lit nearly every night.  Families gather to decorate the tree, bake cookies, sing, and pre Christmas parties are often from the work place, neighbors, or friends.  We have taken the season of the Fir Tree and stretched it until the seventh day of January known as the Little Christmas.

Joyce White Dec 14, 2018 3
Even if you’re upset, you can choose to create an attitude that will free you in some way
Featured