My first impression of The Beast of Macon Hollow was that it would be a mystery story akin to the likes of Nancy Drew and the Hardy Boys of old, perhaps with a Scooby and the gang monster twist.

When the story climaxed I was pleasantly surprised by the more monster than mystery turn the story had taken. (Of course, I like that kind of story).

I offered the story to my ten year old to read, but she didn’t get very far before quitting.  I think the story was a bit too mature for her age level and taste in stories, although it certainly falls into one of the genres she likes.  Perhaps not quite enough school girl drama for her.

I would recommend this story for ages twelve and up, perhaps an eleven year old with more mature tastes. 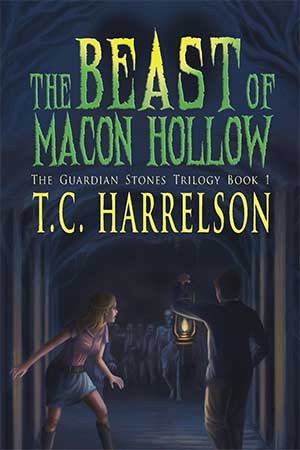 Macon Hollow.  It certainly is an odd little town.  The Hollow is a town cut off from time and from the outside world both geographically and culturally.  It is a town that is “left behind” in Will’s thoughts, lost in an era before the twenty-first century.

That is, until the Shepards came home.

The Shepards.  Dragged from the life of electronics and the modern world they knew, Will and his sister Liz find themselves uprooted and moved back in time to the small town of Macon Hollow after their mother’s death.

The Shepard family came from the Hollow, before Will and his sister Liz were born.  Their father had managed to leave the town behind, never intending to return.

Liz, who has a better relationship with their father, has a much more forgiving nature, trying to bridge the gulf of animosity between her brother and their father.

Will has a difficult relationship with his father, Joseph Shepard, or the Sergeant as Will calls him because he treats him more the way a drill sergeant treats a disliked grunt than he feels a father should treat his son.  The dislike between them is palpable, the Sergeant blaming Will for his mother’s death as much as Will blames himself.

The Trouble With Macon Hollow.  The trouble with Macon Hollow is that it is haunted.  Or maybe it isn’t.  The Hollow’s monster problems can’t really be classified as a ghost.  It is a mystery for certain.  The Hollow is plagued by periodic visits by a beast with a voracious appetite for killing.

The Beast is a curious entity that seems to change depending on the victim’s fears,  growing stronger and bolder with each kill.

Will finds himself linked to The Beast, living it’s killings through the creatures eyes and drawn inevitably into the terror it wreaks on the Hollow.

Learning about his family’s past, Will also discovers secrets about himself, and that he is the one who must stop the Beast of Macon Hollow.  With the help of his sister and their new friends from the Hollow, Will is drawn deeper into the mystery of the Beast and the town’s hidden past.

In The Beast of Macon Hollow T C Harrelson wove a story that kept me wanting to read on, pulling me towards a delightfully twisted ending.  While many of the events in the climax were no surprise (the hints were there if you paid attention), there was one twist I did not see coming.  I like that.

The Beast of Macon Hollow was published by Second Wind Publishing, LLC, where I got it from.