I was at Pasticcio Restaurant on Third Avenue and 31st Street for dinner last night and had the black pasta. 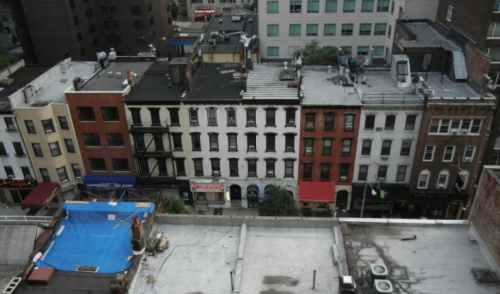 The next day, Sunday, I worked out hard on machines and weights at the gym on East 34th street with my friend, Jeff. Afterward, he asked me where I was planning on going for lunch. I told him I was going back to Pasticcio, and he said, “That’s the same place you had dinner last night, the black squid pasta.”

“I know,” I said. “But that’s the place where I go that most feel like home to me. I have my own table and I know everybody. And, when she is there, the Hungarian hostess just orders for me. If the waiter is a new guy I just say, ‘Go see Anna. Tell her Mike is here and she should order for me’.”

I came back again to my favorite eatery today and Daniel was there, the Romanian headwaiter. It was before 3 p.m., that dead time for restaurants between lunch and dinner, which is when I like to go out and always get the best service.

“Daniel,” I said, “I’m such a loyal customer. I’ve been away from New York for almost two months, traveling America, and now with all the hundreds of restaurants I could go to in New York City; I come back to Pasticcio two days in a row.”

“That’s because we love you here, Mike!” Daniel said. There was a pause as two men felt the discomfort of using the word love, and then I took over.

“That’s right, brother, it’s all about love. You do make me feel loved here and the food is wonderful. The best on Third Avenue. That’s why this place has been here for almost 30 years.”

We started to talk about things like the Mafia being rounded up, the presidential primaries, the gray weather, and an e-mail I’d gotten from a friend in Boston this morning saying that snow squalls were up there. But that was “up there,” and this is “down here.” Weather from New England just doesn’t travel that fast, so I gave it no mind at all that we might be hit with the same stuff.

I began reading a New York Times article about long-lost Ernest Hemingway letters that he had written during World War I. The hotel where he was living in Madrid was bombed nightly and, during that time, he wrote his only two plays.

All of the sudden, the Boston squall appeared on Third Avenue, and for twenty minutes it was like a blizzard. The South American cooks and waiters at Pasticcio went out onto Third Avenue, taking pictures of the snowstorm, some taking a cigarette break then a walk, to feel the snow on their faces.

Daniel came over and topped off my wine glass. He confidently predicted that in twenty minutes, the sun would be out again, and all of this would all be over. I looked out onto snow-bombarded Third Avenue toward the whited-out Empire State Building, taking in the sight of snow collecting on people’s hair and on the tops of their lidded coffee cups and baby strollers.

A city lived out of doors had been caught by surprise and was scrambling to adjust. It was a wonder to behold – human beings adapting to the sudden changes on an island where predictability is the way of life.

I put down the paper about Ernest Hemingway almost getting blown up nightly in his hotel room and looked at the heavy snowfall until, sure enough; the sun broke from between the buildings on 29th and 30th streets. It was just as Daniel had predicted.

Daniel came over and told me to order the grouper, so I ordered the grouper. It was exceptionally tasty and fresh. The sun came out just as the fish arrived, and everything returned to normal on Third Avenue in a matter of minutes.

Pasticcio restaurant is now gone, another victim of high rents. In the past few years, I have watched the changes on all four corners of East 32nd Street and Park Avenue. I’ve seen Capital One, Citibank, Chase, and a TD bank replace all of the retail businesses and restaurants that used to be there.

I don’t know whose job it should be to preserve the culture of New York City so that it does not become a suburban shopping mall, but someone needs to do it.