David Holdridge served in the Vietnam War in 1969 as an infantry platoon leader outside of Chu Lai.

He was wounded and spent eighteen months getting repaired at various hospitals in the United States, culminating with operations at Hartford Hospital in Connecticut where neurosurgeon, Dr. Benjamin Whitcomb managed to free him from his trauma. 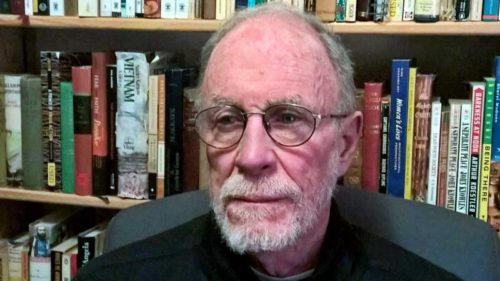 At an early age, my mother sat by my bed at night and read the accounts of the Greek -Persian wars. Subsequently, she moved on to Ivanhoe by Walter Scott. This was before TV was to enter our home and was a wonderful inspiration for a child’s imagination.

Further and more recently…it is tactile. Fondling the book in a bookstore.

“I still loved the furrow of the ballpoint on the soft bond, the indigo on the cream. Running my forefinger down the length of the spine on a hard cover…the tactile pleasures for applied thought…on a page or bound.”
[From: A Rude Awakening]

Hard to say…since ‘great’ is a personal decision. I would say a book is great when it both makes the heart pound …and stays in your mind forever.

Manual labor is the best surcease from digging into the mind. I write in the early morning until the well is dry (epuise) and then work my ’wood-lots’ in rural Vermont.

That they take the time to grapple with the imponderables; that they trouble themselves with ‘the noiseless hunt.’

I was in Iraq for seven years—outside any perimeter, in a village—from 2003-2010. I wrote nights for pleasure and then packaged the memoir upon my return to the USA.

After being hauled out of a Vietnamese rice paddy in 1969 and then spending months in various neuropsychiatric wards in the United States, David Holdridge evolved to become a stalwart in the promotion of the American narrative overseas.

As such, the author witnessed that “businesses” grow from a rather lonely pursuit to the global industry it is today – most commonly known in the West as “Overseas Relief and Development.” THE AVANT GARDE OF WESTERN CIV is the story of one “foot soldier” and his family as they sought to provide salve and transformation within the aftermath of the Iraq invasion in 2003. This memoir explores how challenging and often complicit “giving” can be.

Getting accepted as a debutante writer—by a good publisher. Yes…I had plenty of rejections.
BtW….my first chapter ( Avant Garde of Western Civ—Preface) was sent to Angie in 11/15 and quickly got over a thousand views—that encouraged me.

Can you tell us about how you had your book edited, published, and its cover-art created?

My Friends did cover-art. My publisher (Press Americana) did editing, formatting, and printing.

I will always want a top editor and an effective marketer. Otherwise, it’s just an echo chamber.