The light turns red but the girl holding the red and white cane doesn’t know it, she doesn’t know that the little orange man turned white and is walking.

Our city hasn’t updated their walk signals yet – as I watch a group of cattle moving simultaneously – human feet, humans, knocking into one another and ignoring the girl with the cane.  Those tugging along little children grab onto their hands not knowing they are hurting them, thinking this is the only way to protect them – they will always remember how they were tugged across busy streets. 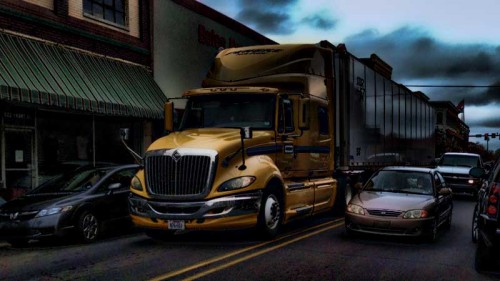 I reach the other side of the street and now, I have to cross again, to my left but an eighteen-wheeler is blocking my view.  Across the side of this enormous truck it reads, “Take the Plunge.”  All I can see is the picture of a swimming pool, a gorgeous back yard filled with hydrangeas, roses, flowing shrubs, and children; in real time the snow begins to fall; large snowflakes – thinking, each one is different.

Those stuck behind the truck begin to get annoyed as they lay on their horn and all around me are teenagers, some lift up a finger, swear, I won’t repeat it here . . . one teen is laughing so hard he is bent over holding his stomach – I can’t understand why making fun of other’s causes such a seen.  I ignored the ruckus and focused on those behind me who were staring between two buildings where a ray of light began to light up the mornings gray sky between two large condos near Congress Park.  The light crossed the black and white pavement creating a sparkle of yellow on white.

I noticed someone on the first level of one of the condos staring at me – I wondered if she too was watching the light, or the pool on the truck.  More people gathered, waiting for the monster truck to move – horns began to honk from every direction, and those teens were becoming louder as they laughed.  More mother’s were pushing their carriages back and forth with no place to go.  Out of the corner of my eye I noticed the blind girl, she appeared lost, I knew she heard all the sounds, at least, I thought she did.  I noticed a squirrel was not afraid of her, or her cane as it’s tail began to twist around her feet.  One of the children in the crowd pointed to the little creature; the mother never turned to look.  Now, the child is yanking on the mother’s arm, she ignores the child.

A group of office workers, well, they had to be; taking the last drag on a cigarette.  One lifts their head to blow the smoke up and away from the crowd but the smoke filters back down onto others – the next one turns to the left, blowing the smoke in the opposite direction, it returns covering his overcoat.  When they finally notice the crowd is stuck on the corner because of the Pool truck – they simply light up again.  All of them button the top of their overcoats, and they push to the head of the crowd, thinking, they can make it past the eighteen-wheeler.

I had lots of time to notice the flagpoles on Broadway; changed for another conference.  It read, a group of teachers was coming to the city this week, which would mean every shop in the city would offer them a discount; every eatery would give them a percentage off.  That’s a good way to do business, I thought.  There was a time when this city was nearly empty.

“Watch out,” I heard.  A young boy, on a winter’s day began whizzing by on a skateboard.  I thought those things were replaced by technology.  He leaps around the crowd and over the curbside, his jacket wide open – he nearly misses one of those fancy sport cars, and you guessed it, horns begin to fill the morning air.

Finally, that truck, it begins to move, inch by inch away from the stop light as the blue water looks as if it’s moving too.  The thoughts of summer takes a turn onto Broadway – the girl with the cane senses,  it’s time to walk again – soon – the snow began to cover the streets, the magic of the yellow light, disappears.  The teens are back in school – and that boy on the skateboard – he simply left the scene.

I open the door to my condo – open the shades – look out the window and see if anyone is staring back.

4 Ways to Involve Your Children in Cleaning

Alan Place May 10, 2012 2
Writing Associations I don't mean groups, but how we hear a story or a name and link them. I was watching…
Writing