He walked down the dark and dingy hallway, it stretched ahead of him like a long dark and dingy passageway in a building that would have doors off to either side of it.

If only he had known he would never have walked down there! It was very scary and caused much fear and trepidation and worry and scariness, he was scared! 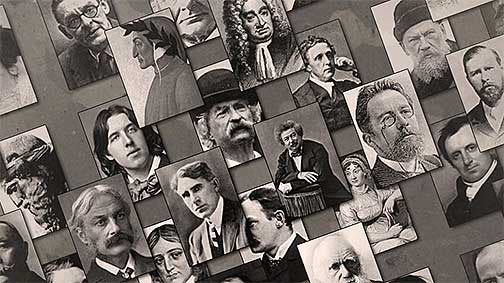 The building was old and had originally been built in 1918 by a group of wandering minstrels who worked part time as masons, the real type, not the get-together and get drunk type, ok, maybe they are the same. The building was built of stone, rock, wood, nails, lathe, and plaster interior walls and all sort of other building things that I am either going to look up and list in detail or not look up and just recite stuff I heard on This Old House.

He found a book lying on a shelf beside a rose, perfectly black, still dripping poisonous dew. He lifted the heavy tome, it weighed so much! I wonder if he should read it? Flipping to page 1, the first page, the opener, the start of this heavy book, the first page of thousands, it said.

The man continued to flip through the giant leather bound book that was about 18 inches by 12 inches and about 6 inches thick when he read the following passage.

He stepped back, the heavy book still in hand and he thought about how strange it was, and yet so, so common, to read stories where the author interference was so obvious, so constant that it was less literature and more hanging out with someone describing a story.

Should he continue reading?

Should he enjoy the story?

Who the hell is saying this stuff in the middle of the book? It’s not a character in it! It isn’t the narrator introduced (horribly as hell) earlier in the story who is giving us this droning monologue. That only left one person. The author!

His mouth hung open, like a gate left partly latched on a windy day that was suddenly caught by a stiff breeze and blew open and no one ever noticed it was open so there it hung, open.

“Oh my god!” he said out loud. “Does this mean that every time in a story I see a sentence that ends with a question mark or an exclamation point, two things that are intrinsically tied to speech, that they should be assigned to a character because if not then it is the author who is the one confused or surprised?”

“Yes dumbass!” whispered the book which until now had been silent.

“And does this mean that if I have a scene where, as an example, a ship was coming into harbour, I should not describe it in detail as if I was floating overhead as the all seeing eye, but maybe instead as the point of view of the characters in the story so the reader feels part of the story?”

“But that’s so hard. I mean it is so much easier to just tell you what is going on. Ships moving into harbour, the wind is blowing, the captain needs to move to starboard because of the gale, the sails are shaking, the chains rattling and everyone is getting wet. That’s all anyone needs to know.”

“But there is so much more that can be shared. Let the poor reader hear the captain yelling over the wind. Let us fell sad for old Tom up in the rigging there, the cold rain soaking him to the bone. Let’s peer together through the squall and hold on with frozen fingers to icy rails. Take the reader on the ride, if they wanted a shopping list of events then to hell with writing, make it a point form story.”

“A point form story, you mean like just a bunch of bullets down one side with events following????? That would suck.” he whined. Pausing he looked about the room, which was still a corridor but the author had forgotten for a moment and changed it, confusing the hell out of the reader but hey, these things happen when there is no editing, and then he said

“But if the author does these good things then their writing will improve and they will no longer be able to say that the reason they are not Steven King famous is because the entire industry is a fix and just doesn’t recognize their brilliance? And I will stop my massively long run on sentences that are painful to read? He also might stop changing the point of view randomly like I am doing when I refer to the author, myself, I and he all as the same person?”

“You grow by leaps and bounds!” groaned the book.

“But what if they do all these things and they still aren’t famous?”

“What if you are really good with computers and aren’t Bill Gates? Life isn’t fair and there is plenty of competition, get over it, still no excuse for shoddy writing and laziness.” did the tome moan.

“But I can still use brackets in my writing (I hope)”

“Have you ever heard anyone use brackets when speaking? Are you just too lazy to write a good sentence without having to fall back on lazy, easy ways out?”

“This is so unfair! You are just not appreciating my artistic vision and you are trying to control my creativity and you are being a poopy head because my mom loves my stuff.” he whined.

“No I am not, listen, every time you get a critique doesn’t mean the end of the world, it means the start of a lesson you can learn.”

“Yeah well shows what you know. I have over 300 books all self published so I don’t need any advice from you, stupid enchanted book I found in a dimly lit passageway! Every one of them was good enough to publish and I did it all without once getting editing help, spell checking, an impersonal review or while listening to any advice.”

“I wish I had hands so I could choke you right now.” wept the book.

The man eyed the tome with a thoughtful gaze.

There is so much I could learn from you, so much you could teach me and so many ways I could improve my writing and actually tell a great story in a great way. But that would be too much work and I already think I am perfect and the last thing I ever want to do is have to work hard to be a writer. I want the words to flow from me naturally like a POW with dysentery.

So he sat the book down on the table, removed his lighter from his pocket and set the first page alight. The book died at the hand of the author and everyone who walked into the room, I mean corridor afterwards knew he did it.