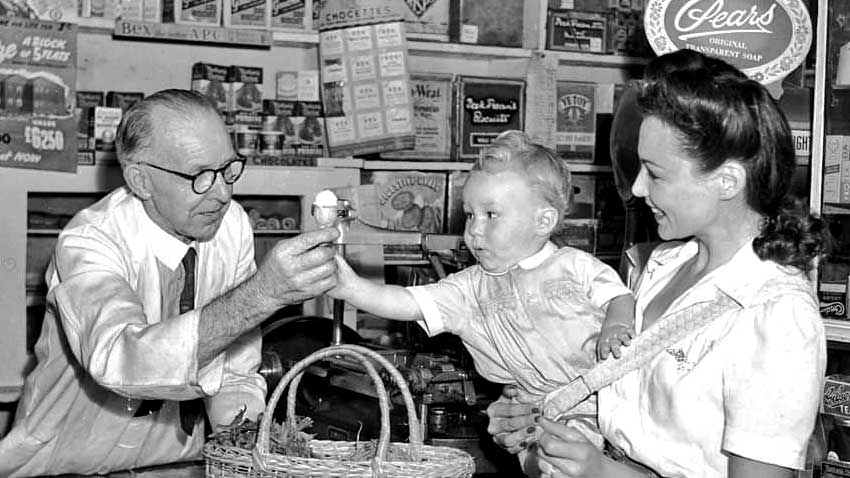 Our neighborhood was a gathering of crazy people, but only a couple stand out, one lady named Mrs. Hanson, who popped popcorn all hours of the day and lined up the bowls on the railing of her front porch.

Mrs. Hanson would call out to any child who walked by her home, “Won’t you come and play?”

In our generation, it was the “candyman,” who sat alone inside cars waiting for a child to walk by and lure them inside; he held out a piece of candy.  In our neighborhood, we heard about Mrs. Hanson, who would yell out when we walked by, “I have lots of popcorn for you to eat.”

Now Mrs. Hanson smiled on the outside, and I knew she never would hurt a child – she was lonely, at least I heard she lost her only daughter when she rushed across a busy street.

She lived next door to the neighborhood grocery owned by two elderly people rocked back and forth in rocking chairs, one chewing on his cigar, and his wife, who never cracked a smile, sat there to stop children from drawing hopscotch lines on her sidewalk.

Neither the man nor woman of the grocery store liked each other; they did all the staring – at least Mrs. Hanson, next door, had a smile and a song in her voice.

Mrs. Hanson stared at people who entered or left the grocery store.  She turned her head so quickly when the cowbell rang, and the door opened – she knew someone entered the store.

I knew the groceryman followed all the girls into the store; he chewed a little harder on his cigar, saliva came from the sides of his lips – I never liked the groceryman, but I felt sorry for Mrs. Hanson. Even if I was a little girl,

I trusted Mrs. Hanson but never ate her popcorn.

My feet followed that same path; first past our neighbor – who I loved, although they never had children unless the grandchildren showed up on Sunday, then came Mrs. Hanson’s house, and then the groceryman. When someone needed something from the grocery store, sent three houses down Avenue A, on a city street; each house sat on fifty feet.  When Mother was home, I knew she would wait on the corner, but Mother was gone to stay inside the Hospital on the Hill, and Grandmother, she prayed most of the day.

Some of my friends went into the store because it was the only place to find a real root beer popsicle;  they had to lean over a freezer and find them buried at the bottom. I think the groceryman did that on purpose.

If I ever went inside, it was because I was told to, and he stared at me when I left sucking on my popsicle; he yelled, “Come back any time, little girl.”  He knew my name, but when his wife was not sitting on the porch, I was a little girl.

The plate-glass window showed pictures of Juicy Fruit Gum, Fudge Pops, Milky Way Bars; everything a child would beg – and I knew a few who took some right of the shelf;  I wonder if the groceryman knew?

When the groceryman arrived at Christmas, he hugged Mother.  On the super eight projector you see both smoking and toasting with a glass of beer – you see, Mother liked the groceryman – both from the same town, attended the same school, and he owned a grocery store on the corner of Middle Granville.

Have you heard people say children feel things when something isn’t right – I knew something was wrong inside this store.  I bet Mrs. Hanson did too; they called her crazy.

Mrs. Hanson was not crazy. She just wanted company, so she offered children a bit of popcorn – I told the neighborhood’s children I wasn’t afraid of Mrs. Hanson. She was harmless, but it was the groceryman I did not trust.

Adults never listen to the child when they talked about big people, but children tried to obtain their attention, and off they go – telling us to stay clear of the wrong person who would smile and needed a little love and attention. I should have told Mother only little girls received free popsicles when the car was not in the alley when he was all alone.

You see, little boys ran faster and returned to the alley with ice cream or gum – they never did receive free treats.

We all had our rules, and mine were strict except when Mother was in the hospital on the hill, and Grandmother was in the middle of her prayers – I never thought of the rules or where I would run to play.

Grandmother was praising God, reading her bible, or talking with her friends – thinking I was watching The Little Rascals in our parlor.

The man always followed me into the store, and when Mother was away, he would stare at me from behind the counter, then walk around and stare at me fighting with the cover of the freezer, searching for a root beer popsicle,

Then I felt this jumping inside me whenever he told me to follow him; he told me he had some things to bring home.  I never realized what his present was until I was little – and I guessed about it, never told a big person because they would think I lied.

You see, the groceryman gave anything free when his wife was gone; he locked the door then turned a sign around – Mrs. Hanson watched the neighborhood until the sunset and shades on the windows of the grocery store pulled open.

Brought up to listen to adults – so I listened.
I knew the crazy people living in our neighborhood.