Ralph at the Bedside of Giovanni

Ralph is at the bedside of his best friend, Giovanni.

“We played games with chestnuts in the old days: remember, your Papa teaching us to yank artichokes and we dragged them to our stone homes, burned them to keep us warm.  The hens would sleep near the fire; they walked right in as if they lived inside, door wide open and your Mama feed’in scraps of dried pasta she hung on a rope above the fire from those artichoke stems.” 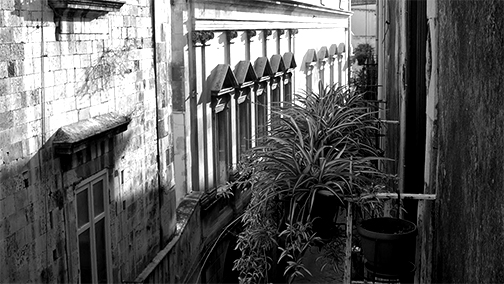 “The heat was wicked; remember following our Papa’s up the hill, watching as they dumped wheat into the shed to make muline.  We told each other we would never work for the Don, never do what our Papa’s were doing, and we began to make our own lives, drawing pictures of America in the dirt; we were so young Giovanni.  We were still rolling nuts on the floor in the kitchen, you never lost.  Your Mama had one missing tile, one tile that served as the perfect spot to score a point, but those nuts; they wiggled back and forth, never rolled straight.”

Why am I talking, thought Ralph, my best friend laying still, like a corpse?

“‘Giovanni, in the morning we passed the Madonna and stared at her naked feet and by noon they would be covered with red carnations

.  The fishermen used old tin cans which smelled like tuna and on their way up the mountain picked the flowers, and prayed to the Madonna for their morning catch – we knew witches would gather nearby, remove the flowers, as crows gathered and sat on a witches shoulder.  We knew the difference from a good witch and an evil witch gathering like the olives beneath the trees.  Remember how they stared, never blinking when those men who worked for the Don ordered us to pick up the olives from the ground near the witches feet?  We always did as they told us, but we hid enough olives to bring home, and our Mama would soon have enough to make oil.”

Ralph noticed his friend opened his eyes and quickly closed them.

“You planned it all, leaving our home in the mountains, for a better life across the ocean.  We wanted nothing to do with the big shot which knocked on the door to collect money if our Papa gave less to the Don – our family never owned the land, but the man, a big shot, owned us.  You know you never told me we were traveling in filth, below the ocean, and for many weeks we would smell like vomit while drunks danced with all the women, and you kept telling me to be quiet.  We traveled far and ended up at home, a place you said was a cousin from the mountain – but why was everyone there his cousin?  So here we stood, you and me in a stranger’s home and once more a man no different than the Don was telling us what to do.  Now we were foreign slaves; it never lasted long enough to grow up in the new world, not the first time.”

We did, Giovanni, we returned to the New World, thought Ralph.  Here you are a good man lying in bed because of the men you never met, who punished your flesh and blood by hurting you, the innocent; does it ever end?

“She was right you know, he was a man who thought of no one, not even his own family.  Now you are reaching for the light.”

Ralph remembered his dream the night before; standing in front of the Syracuse Hotel, near what is known as Snake Hill, he saw himself reaching to start the car, but right before the explosion a brighter, kinder light, and all he remembered was Giovanni smiling.

The Essence of a Day

A Taste of a Memoir