Danger Danger: Prologue
The shining red car hurtled across the road towards them. ‘Dec!’ Katie shrieked. Declan swerved to the left, jammed on his brakes, and felt the Honda bike skidded to a shuddering stop. Then it toppled over. There was a blinding pain in his left leg, then nothing. 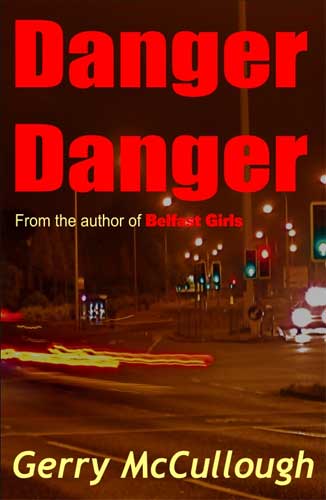 Katie felt herself flying through the air. She landed on her left arm. The black leather jacket ripped apart. She felt her head crash into the hard surface of the railing in the centre of the road. Her helmet tore loose. It wasn’t attached to her head anymore. It flew across the road, landing far away from her. Then darkness, and silence.

The motorbike had come up out of nowhere. Steven saw it vaguely out of the corner of his eye. He’d thought he could make it across, in the last moments after the lights changed, just before any traffic came from the other direction. But here came this bike, way before anyone could have expected it. He dragged on the wheel, tore the Mazda round away from the bike, towards the right. Had he managed to miss it?

He felt the car wheels squeal across the wet slippery surface of the road. The car was spinning, out of control. He heard a scream which pierced his ears agonisingly. Out of the corner of his eye, he saw Annie’s shoulder bang against the passenger door, saw the door burst open, saw her shoot out of the car. He wrenched at the wheel, trying obsessively, passionately, to regain control of the car. But it was too late.
He was crashing into something – he wasn’t even sure what. The concrete bollard with the blue direction arrow in the middle of the road, perhaps. A moment later, his head hit the windscreen. And then there was nothing more.

Marie Sinclair, aged seventeen and single, lay in a hospital bed, struggling through the first stages of childbirth.

She had been to the antenatal clinic, had learned how to relax, had learned all about the second stage, about panting like a dog and not pushing until the doctor or the midwife told her to push.

She had hoped that Jamie would be with her when all this was happening. She had to admit that she was scared.

Natural childbirth, that was the thing to go for, everyone had said. But right now, there were only two things she wanted. One was a hefty dose of some helpful drug, something, anything, to take away the pain.
The other was Jamie.

If he had been here to hold her hand and tell her he loved her, it would have been so much better. But he had chickened out. He’d been horrified when he found that she was pregnant. Had never suggested marrying her, even moving in with her. Didn’t want a baby. And when the scan showed that there were actually two babies, he was even more reluctant.

Marie groaned loudly again. The pains were coming more strongly than ever.

The doctor offered an injection of pethidine. Marie gratefully agreed.

Everything was further away now. She could still feel the pain of the strong contractions. But it felt as if they were happening to someone else. Someone miles away. Then suddenly she could hear the midwife calling out to her loudly.

She listened with an effort. ‘Don’t push! Don’t push!’

It was almost impossible to obey. The urge to push was almost overwhelming.

Marie remembered her ante-natal training. Pant like a dog. She panted. Panted some more. Went on panting.

Then, ‘Good girl!’ It was the midwife, speaking from so far away. ‘One more effort, now. Push!’
The second baby came flying out, fielded dextrously by the midwife. Then the afterbirth.

And then peace, and a time of rest. Marie slept.

When she at last surfaced, there were two tiny babies in two cots, one on either side of her bed.
Marie gazed at them in awe. How beautiful they were. But how could she look after two?

She remembered that she had arranged that one of the babies should be adopted. She couldn’t bear to think of giving up both. Now, with a pang, she realised that she didn’t want to give up either.

Her mum had offered to help, so that Marie could go back to school, get qualifications for a decent job in the future. But only if Marie didn’t keep both babies. Mum could only help if Marie only kept one. Mum had made it clear that two babies were a bit much for her to look after.

Jamie didn’t want to get involved.

Marie was frightened. She had been set against abortion. It was murder, nothing else. But here she was with two beautiful babies, and a decision to make. She didn’t even know if they were boys or girls.

If they were one of each, she would keep the girl, she thought suddenly. It seemed, somehow, as if that would be easier.

A nurse peered round the bed curtains, and pulled them back enough to be able to come in.

The nurse came round to Marie’s left side, scooped a tiny bundle out of the cot, and placed her carefully in Marie’s arms.

‘A little girl,’ she said, flicking back the blanket which was wrapped round the baby, to demonstrate. ‘Isn’t she beautiful?’

Marie gazed at her daughter. ‘She’s so tiny.’

An overwhelming love for the baby swept through her.

The nurse looked surprised at the suddenness of the decision. But it wasn’t a good idea for her to rock the boat, so she said nothing.

‘I decided I’d keep the girl,’ Marie said. She knew she didn’t need to explain, but somehow she wanted to justify herself.

‘Right,’ said the nurse briskly. ‘So this other one is for adoption. You have six weeks to change your mind, you know.’

‘No!’ said Marie. ‘No! I can’t keep them both. Please take the other one away now, nurse! I’ll sign the forms when the six weeks are up, but I couldn’t bear to have him here all that time, and get to love him. Please!’

The nurse felt that she understood. It would be better if the baby was looked after away from the new mother until the adoptive parents could legally take it. Silently she wheeled the cot out from the cubicle.

Marie continued to hold her little daughter. She would call her Catherine. Katie for short.
She felt that she had made the right decision. A girl was more helpless. A girl needed her mother.

No one had told her that the other baby was a little girl, too.

Reminded of the Warm Love