Arven and I split up and rode around opposite sides of the rock formations. The enemies were close, and concealment might not work against a powerful mage. Besides, they were already aware of our presence. I drew my sword, and my eyes searched frantically for any sign of them.

Lilly had packed several vials of healing potions in my pack, but if this foe killed us all, no potion could save us.

If I could draw attention away from them, away from Caliphany, then maybe they could escape. I cursed under my breath at Leopold’s insistence that she come along. She was talented, but far from battle-hardened. At least she was near the six paladins, who would protect her with their lives if needed.

I rode completely around the rock formation, until I reached the road again. Arven came around on the other side. He shrugged. But then, we felt a rumble. A soft tremble at first—then the ground shook with such violence, the horses whinnied and reared. I held onto the reins for dear life, and to my horror, the sky above us darkened and churned with blackness, a swirling mass of pure evil.

Between us and the caravan behind, forms dropped from the black cloud, like wisps of smoke, but took immediate solid forms. They were knights of Sarvonn, covered from head to toe in black armor, which made them appear as nameless, faceless monsters. Sirius must have made enemies in Ironhaven, and they were not conservative with their use of dark magic. 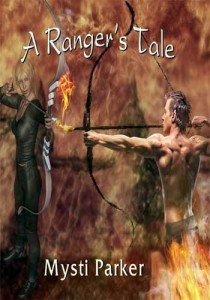 They ran toward the caravan. Arven and I spurred our horses to follow. My heart turned to lead at the sight before me—the caravan was no more. Whatever had spawned that black cloud, quaked the earth with such ferocity, it shattered the carriages. The paladins, along with their horses, spilled along the ground, an odd mixture of struggling equine limbs and armored elven bodies. Charlot tried to right himself to stand, but Caliphany was nowhere to be seen.

Two of the knights turned on us. I’d never faced Sarvonnian knights, even on the few missions I’d conducted in Ironhaven. The paladins knew how to handle them, and I was hardly a paladin. Green energy streams burst from their hands. I ducked under the speeding blast. Arven wasn’t so lucky. The magical attack knocked him from his horse.

The commotion from Arven’s attacker caused the other knight to turn just long enough for me to leap off Trick and throw myself on him. The two of us rolled in the dirt. His helmet fell off and revealed a young dark elf with desperate, violet eyes. He was most likely one of the many young men forced to join Sarvonn’s militia.

Fear flashed in the dark elf’s eyes, and he struggled to free himself. I pinned his neck with my sword. Anger consumed me—anger toward him, toward Sarvonn for breeding such hatred, and at all the injustice in the world that kept Caliphany and me from living our lives in peace. I focused all of that rage onto him and drew the blade across the dark blue skin of his neck. One gurgling sound and the dark elf lay dying. Blood spilled from the wound and pooled under his head.

I averted my eyes from the grisly sight. Arven ran up the nearest rock formation, followed by another knight. He turned and shot his pursuer with an arrow. It sank into his shoulder. The knight screamed and threw a blast of energy at Arven before he toppled over. Arven took the blast, and it knocked him backwards. He rolled off the other side of the rock. When Arven’s attacker aimed for me, I rolled off the dead knight, swiftly retrieved my bow from my back, and fired. The arrow sank deep into the knight’s thigh. He screamed from the pain, but hobbled to where Arven’s horse had wandered, pulled himself into the saddle, and rode away.

Ahead, the remaining knights had reached the remnants of the caravan. The paladins had killed some of them already, and the ones left were embroiled in fierce melee. The paladins were able to block the magical blasts with their shields, so the knights resorted to their weapons.

My eyes searched frantically for any sign of Caliphany. Finally, I spotted her, beyond the bitter battle, crawling over the wreckage. She pulled a carriage panel from the ground and found her father. He lifted a hand, and she dragged him out.

Still on my knees, I took the opportunity and aimed for the nearest knight. The arrow sank into his neck just below his helmet. Another knight took an arrow to his shoulder, and a paladin finished him off.

The sounds of battle quieted, as the paladins defeated the attackers. I scrambled to my feet and ran toward Caliphany and Sirius. She helped him stand. He appeared unsteady, dazed, and weakened.

Caliphany said, “We’ve got to find the others and get them to safety.”

The paladins started to uncover the other mages from the wreckage. Several of them appeared to be alive, but stunned. Before I could speak, the wind gusted, and the dark cloud ahead of us grew dense and began to spin. It concentrated itself into a thin cyclone that dipped to one of the rock formations below. Out of its dark tendril, it deposited a single man.

Mysti Parker is a full time wife, mom of three, and a writer. Her first book, A Ranger’s Tale, was published January 29, 2011 by Melange Books. Find Mysti at http://www.mystiparker.blogspot.com/

Where is Your God?