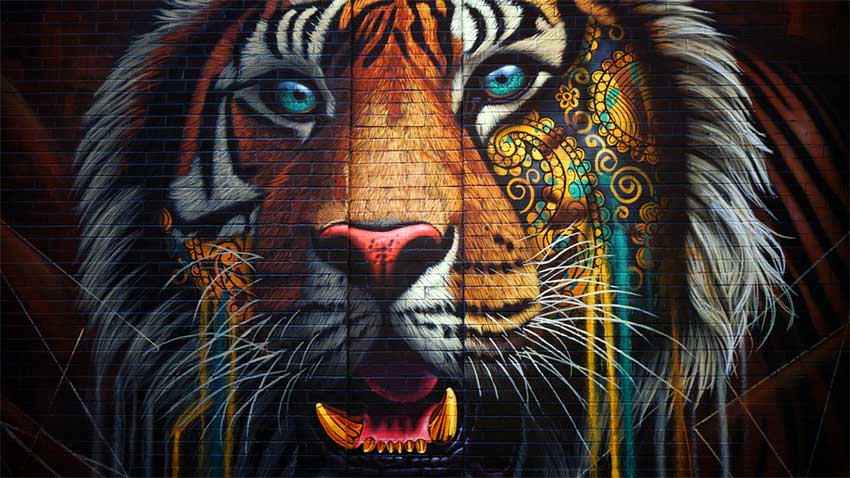 The first time I dreamed of the tiger, he was white, beautiful, and majestic, and he was flying even though he did not have wings.

Somehow, it seemed as though I was also flying with the tiger, but I did not know if I was riding him or just flying beside him. He kept appearing in my dreams the following nights. Sometimes he accompanied me in my wanderings in the secret gardens of my nightmares; sometimes, he was lonely and walking under trees that bore eyes of wild beasts instead of fruits; sometimes, he would be angry as though he was about to jump and kill some invisible enemy. Even when I did not see him, I could sense his presence. Hidden somewhere, he was watching me.

The last dream I had was frightening. Mounted on the tiger, I was rushing to a battle. I was not afraid of him; he was my companion. What upset me rather was this weird feeling… I was confused; I felt lost. I wasn’t sure who or what I was, which scared me more than not knowing what I would have to fight at the battle. I was overcome with anxiety, and even my brave companion could not comfort me. On waking up, I sat on my bed and tried to figure out what caused this fear.

Of a sudden, I remembered when the dreams had started. It was on the day of the competition. The judges had admired my dance. They did not say anything – they weren’t allowed to do so for as long as the competition wasn’t over – but I saw the awe in their eyes as they watched me, and I was proud and happy. I had this wild, wonderful feeling of superiority that could have been mistaken for arrogance.

But it was only self-awareness of the enchantment of my performance. While dancing, I felt as if I had shot the moon as if I was a Dance Empress outshining all other dancers like the sun masking the dim light of the stars.

After me came a thin green-eyed girl. She wasn’t half as good as I was, but she danced beautifully. Her movements were not as fluid and natural as mine, but they were neat and flawless; she did exactly what we were taught without errors – without passion either. I knew that she would be the winner of the contest. She was not better than me, but she was what they wanted. I couldn’t bear to lose. I left before the competition was over, not even bothering to hear the result.

At the moment, I thought that someone was calling me back, but I did not care. I didn’t need them to tell me that I was the best. I knew deep inside me, and this was enough. Dance was my magic power, and I was unrivaled in it; I was a master sorceress. Nobody could take this from me, nor did I have anything to prove to anybody.

While remembering all this in the darkness of my bedroom, suddenly there was something like a light in my mind. The majestic white tiger of my dreams was my pride, my consciousness of being a dancing queen. I am neither embarrassed nor guilty for feeling this way. If birds and flowers were gifted with self-awareness, who would blame a nightingale for knowing herself as a wonderful singer or a gardenia for acknowledging her scent as one of the most enchanting perfumes?

has been bestowed upon me?