There is nothing good about war: there are no winners, it is neither humanitarian nor humane, it is a conflict led by manipulators who do not care about consequences, about ‘collateral damage

’ or psychological wounds that can’t be healed afterward.

In many cases wounds aren’t healed for several generations, the trauma gets passed down to the children, for both the victims of wars and the ‘victors’ are affected as well as the unnamed soldiers whose conscience had to be silenced whilst following orders. 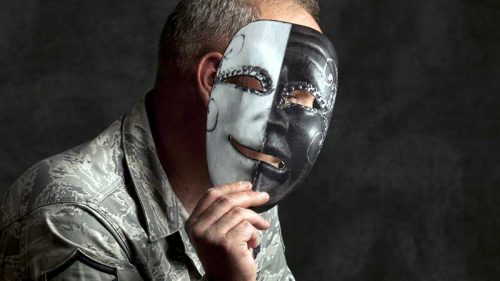 Who can justify war? Why were they actually fought? Have we ever known the exact, true reason for wars that were fought for centuries all over the world?

Wars impoverish countries, making thieves and criminals of people, and often moral judgments cannot be passed in a war. According to many, self-defense is considered to be permissible in the case of an invasion, whilst many would not justify such a theory, arguing that even an invasion is not a reason for atrocities.

The question is: If an absolutely despicable enemy attacks, is it justified taking any action during the war to win or to fight off the presented evil, or is that an act of reducing oneself to the same level?

The biggest problem, which I tried to portray in “Dethroned” about war, is that its combatants are prone to self-deception

justifying their actions, but there is no plausible moral theory which could license the atrocity and exceptional horror of war.

“Dethroned” portrays war as a barbaric act. If man believes that there is no law above him and takes the law into his own hands he sets himself onto the path of destruction from where there is no return. That barbaric act of the two wars almost caused the disappearance of European culture.

” is an anti-war novel; the heroes are anti-heroes, for when there is a lack of clarity and insight into the nature of the war and its consequences everyone loses. After a war the world or man is never the same again; whether this change was for the betterment or for the worse for those who participated willingly or unwillingly, you can find out in my novel that has many twists and turns and takes the reader on an unpredictable journey, offering insights one couldn’t find in mainstream reporting.

This is not ‘just a war drama’, it talks about peace and love, dogma and spirituality, destruction and crisis of morality and humanity, offering hope into the deepening of collective understanding, empathy and repentance for unthinkable deeds of cruelty and atrocities.

SYNOPSIS
When Gregor Truba, the God of eighties Rock, exchanged his guitar in the nineties for a machine gun, he couldn’t know he was going to be dethroned not only from the centre stage which he dominated for a decade, but from his own soul as he set off on a bloody rampage with his elite troupe of Brothers in Arms.

He loved a young gifted poetess Pia, the great grand-niece of Nikola Tesla, who wasn’t able to return Gregor’s love, for she was dethroned from love after witnessing the most shattering scene, possibly staged by her father. Would she ever be able to find love on her mysterious journey from Amsterdam to London, Sydney to Japan?

How many dark secrets did the Catholic Priest, Friar Marag, keep under his tightly-lipped smile, whilst purposely manipulating the faithful, shaping and sculpting their minds and realities as if he were a co-creator working in alliance with the Devil himself to generate chaos and leave his personal stamp on the existence and history of his country. Was he dethroned from humanity for his numerous and well-planned misdeeds?

Was Veronika Truba dethroned from her original self when she changed her name to Nikki Barlow upon her arrival in London, where she formed an unusual friendship with a flamboyant man and the commitment-phobic Dean Bloxham?

An excerpt from “Dethroned”
Chapter ‘Brothers in Arms’

That was the night when speechless Hugo came to his dreams and just wept and wept. That was the last night that Hugo ever visited his dreams; he came to say goodbye and he said it with his unstoppable river of tears; then he disappeared, for good, as a white mist in the glory of a rising sun.

After a short while, since Hugo’s disappearance, Veronika started to frequent his dreams: stern and provocative without a word she would stare, not in his eyes or in his face, but in the distance, in some future where Gregor couldn’t find his figure, like a ghost who would never see himself in a mirror. After such dreams, the future looked to him as a future of broken mirrors.

Broken mirrors in seven thousand pieces. Those nights were nights of sweat and sudden awakenings; they resembled more the nights of a menopausal, worried woman than a war hero whose obedience was never questioned, whose decisions were ruthless. For his nightmares, his misfortunes and nights of sweats and broken mirrors he had an excuse and explanation: the enemy on the other side of gunpoint. Not even the crucifix, which Friar Marag blessed for him, could bring any relief, only the bottle of good old schnapps, which was given in abundance by the locals to whom this army was a sign that God had finally opened His eyes. It looked like mercy from Heaven.

His peace was fragmented, his thoughts discontinuous and his speech harsh and slurred. Sometimes he would think of his comrades, his brothers in arms, more as a ruthless mob that ruled and roamed the villages where old people, innocent young women, and children were left to wait for their uncertain future, as their men fought the same insane war Gregor did. They killed their animals, burned their houses and put bullets through their heads. He saw rivers of blood and heard horrid screams from innocent civilians: scenes that made him question his sanity. Every night was a nightmare, every other night he would see the eyes of pleading victims, of crying mothers and terrified children.

Every other night he would see the eyes of his sister Veronika who didn’t look at him directly but looked at his deeds speechlessly. He would scream waking up in a cold sweat, and she was often yelled at in the silence of the night: “Shut up, you, cunt!” When his conscience tried to sneak in, he would silence it with more alcohol or a song, but his feeling that his comrades were uneducated, rural brutes grew day by day; he started to hate himself as he could occasionally witness that he had become one of them: Gregor Truba, who played the piano and guitar in his childhood and youth, who carried his brother Hugo on his back when Hugo wasn’t willing to walk any longer, Gregor who played basketball and was considered to be the, ‘Golden Boy’ in the neighbourhood because of his random acts of kindness towards everyone, he who tried to defend his sister whenever his mother would say anything against her, he who sincerely loved a girl whose words came out as beautiful poetry every time she spoke… ‘No, I can’t think of it… I have to defend my country.’ With much difficulty, he fell asleep and Veronika came and looked at him speechlessly and he was awakened by the horse’s whinnying, by the thunder of machine guns, by curses and shouts. He was woken up and he couldn’t distinguish what was the nightmare: his waking hours or his dreams.

The Art of the Forever Young Face