The Other Person In Me

This week it occurred to me that in my body someone entirely different is hiding. Someone who watches all that happens around her without anyone noticing. Someone who sees, but isn’t seen.

She watches you (guys), she talks to you, does stuff and responds to you, but it’s not me. The one who sees but isn’t seen watches and analyzes, not only you but also Bruria herself. This is a very strange feeling. 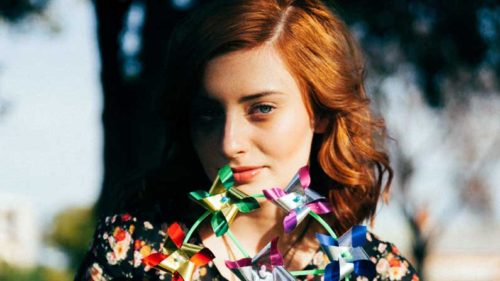 I find myself laughing in various situations as I can almost read the thoughts of the people around me. For instance, suddenly I got this urge to knit. I’m trying to acquire some wool. I enter a store which looks like it may have wool for sale. After a few rounds at the warehouse, I go to one of the young sales girls and ask her: Where can I find knitting wool around here? The sales girl’s eyes opened wide, and she started looking for the UFO on which I must have arrived.
OK, so they don’t have any.

I went to another big store, at which I believe to have once seen knitting wool. The sales lady thought I didn’t really know how to speak Dutch and started explaining to me in English that they don’t have any wool, nor have any of the other franchises.

I returned home laughing, laughing at and laughing with myself – everyone is looking for computers, computer software, all the means available to update and upscale their knowledge and skill, and all I’m looking for is some wool to knit with.

You try to explain to them that it’s fun to knit, to create, let alone the peace of mind

and the satisfaction it gives you. The person who does get excited by all of this is my little granddaughter who doesn’t believe her eyes: how could it be that a thread can just turn into a sweater by the mere work of two sticks.

My only conclusion can be that I go against the mainstream. Everyone is moving forward, and I, perhaps, am taking a few steps back. Or maybe I got stuck somewhere, at some age…

You think this is all? It isn’t!

And then again I find within me this other me, who is hiding and only every now and again comes out and quotes my mother-in-law. I tried arguing with her – with this ‘other’ me because of every so often she gets me into awkward situations. My son recognizes her, and tells me: “Mom, you’re just like Grandma Alice!” I try to tell him: “It’s not me! It is really Grandma Alice who is hiding somewhere in there!” But to no avail. My daughter is also starting to recognize her grandma within me: “Dad, mom actually looks like Grandma Alice, what’s going on here!?”

Again I tried to argue with this creature inside of me and ask her to leave me alone. But to no avail. So I decided that instead of fighting her, we might as well be friends! The result is a splendid and beautiful friendship, and I started to openly quote her, even with a little pride. For every situation, she has a saying. For instance: When you’re a little bored, all you need to do is “lose your mule and try to find it again.”

Or if you don’t want to lend to your friend your clothesline, simply tell her “I am hanging the spaghetti to dry on it.”
Or, “you can slip up badly, but when your enemy watches, turn it into a jump.”
And the cream of the crop: “Why would you run away from the truth?”

At this point, we actually start transforming into one person. Neither of us excels in tact and sometimes we are inclined to tell people the truth, even when they haven’t asked for it. My mother-in-law never quite understood why people get insulted when you show them themselves in a mirror. She always reacts: “Why would you run from the truth?”

Oi, oi, oi, how often have I caught myself saying just that!

And again I find within me another persona. The persona of my father. My father always used to say that while his body was getting older, his spirit remained that of a youngster. He called himself the “jeans generation.”

I really find myself in the exact same situation. I feel like doing things young people do. To be honest, I feel like being a bit naughty, like satisfying the girl within me. This really works out for me, because I’m a kindergarten teacher, working with little kids: they let the girl within me get crazy with them. They don’t try to link looks to behavior. They react frankly and honestly to my behavior, without preconceptions and prejudice.

So tell me, is it OK to have all of these people hiding inside me? Or am I just suffering from a split personality?