In an election year, people are just as interested in a First Lady – or potential First Lady – as they are in the candidate.

Few First Ladies have generated such wild-swinging opinions as Mary Lincoln. She is viewed either as a termagant that made Lincoln’s life a misery – or one of the most misunderstood characters who ever lived. 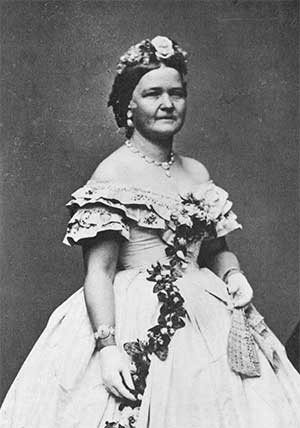 There are some historians who loathe her. She is easy pickins’ for faults, without a doubt. And those historians who love her (perhaps too strong a word), are really more apologists for Mary than sincere admirers.

The main reason for the spate of hate about Mrs. Lincoln comes from William Herndon, Lincoln’s law partner of nearly twenty years. There was no love lost between Mrs. L. and Billy Herndon, considered by many to be a notorious drunk and liar. Much of his comments on Mary Lincoln were spiteful, and in some cases, outright fabrications.

The Herndon-Weik book (Herndon’s notes were given to Jesse Weik, and published after both Herndon and Mary Lincoln had died) was taken as gospel for generations. Mary, of course, did little to help her own cause.

She did have a jealous streak and a hair-trigger temper – the Hellcat of John Hay’s diaries. The scandals of the Widow Lincoln trying to sell her clothing, and her trials for insanity were printed in all the newspapers and unquestionably poisoned her reputation beyond salvaging.

Some forty-odd years after Mary’s death in 1882, her niece Katherine Helm, by then an elderly woman herself, wrote Mary’s biography. It was the first biography devoted solely to Mrs. Lincoln.

Even adjusting for the language of post-Victoriana, it provides a wealth of information about a figure who looms high in history for no other reason than the association: A reflection of Lincoln’s glory.

There are many historians and psychologists today who surmise that Mrs. Lincoln likely suffered from a bipolar condition. Mary’s niece, who included vital information about Mary’s childhood, commented that Mary was “either in the garret or the cellar.” She further likened her to a day in April, smiling and sunny one minute, then dissolving in tears the next.

The bi-polar suggestion obviously has merit, but in Mary’s time, neither psychology nor its treatment was available.

Today, there are dozens of major biographies about Mary Lincoln, all with their own distinct points of view. A collection of her letters has been meticulously researched and annotated, an invaluable resource to biographers and historians.

They never fail to comment on her quick and lively wit, her easy dimpled smile, and her warm affection and generosity to those she liked. Still, she manages to be her own worst enemy, no matter how much one may try to “befriend” her, or even pity her.

But the sad and pervasive truth is that she was essentially a lonely woman. While she had her little “coterie” of friends in those early years in Springfield (pre-Lincoln), those friendships fell away when she married, as was fairly common. Her husband became her “all” as it were. Once she became First Lady, she alienated the society of Grande Dames from the start, seeing her position as superior, rather than equal.

Those congressional or cabinet wives who became part of her circle were few, and generally fell into the category of good, kind women who believed it to be their moral duty to befriend a generally friendless, and after her son Willie died, sorrowful woman.

What becomes obvious in any study of Mary Lincoln is that there were very few true friends in her life: people who genuinely liked her for herself, and who enjoyed her company. Nothing is more telling than the conspicuous absence of family when Abraham Lincoln was assassinated. A bunch had come for the first Lincoln inauguration. No one rushed to Washington to be at her side in April 1865.

Was she mad, as some said? Few psychologists today would classify Mary Lincoln as insane. More likely, she was an emotionally fragile soul, permanently traumatized by one horrendous event. Had she been married to anyone else, she would be completely overlooked by history. But she wasn’t. She was married to Abraham Lincoln, and if, for no other reason, it is practically impossible to be neutral.

How Do You Decide that You are Finished Writing a Story?