People around the world are fascinated about the subject “Ghost,” and anything concerning the Paranormal.

I am one of those people. Many years ago I wrote a book which is named, Beyond? A book that has sat on the shelf for the right time to be released. Throughout my life, since childhood, I have been fascinated by the unknown. My struggle to understand what I knew, heard, and saw, would take me time to pull together for a worldwide audience; bringing knowledge to other people to understand the subject of innumerable topics has been untold, and is significant for those who have experienced things beyond question to be heard and understood. 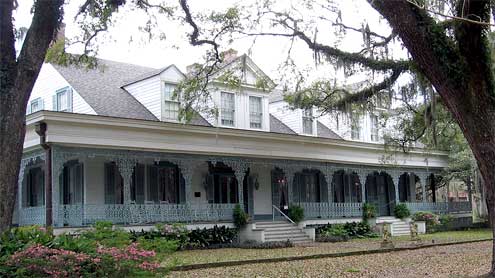 I grew up in the deep south of Louisiana, where some of the most haunted plantations are located. One you may have heard about is the famed Myrtles, one of the top 10 haunted houses in the United States. The home where I grew up was only a stone’s throw away from this renowned haunted house.

Strange as it may sound, my first boyfriend in school was from France. His family came to my home town to purchase a home for only a year. There were twins and the family, a boy and a girl who were exactly my age. I must admit I was spellbound by this handsome young dark haired, green eyed, French boy. Then I learned we were neighbors and I became more attached to the home in my yard.

I ended up the lucky girl in our class since he fell head over heels for me. But how many young children have the opportunity to spend the evening and overnights? Because his sister and I became best friends.

Many nights his sister brought me through the home in the pitch dark hallways, as we searched for a ghost. Nancy Drew was popular, and we felt like we were investigators like the writer. This was when we both became interested in the past, knowing the gossip around town about many who roamed the property especially at night. The Myrtles was not like Amityville on Long Island, but qualified as a notable historic home for ghosts.

People have asked me if I was frightened staying at the Myrtles, and I must admit growing up in Louisiana we were accustomed to haunted homes and plantations, but still feeling the unknown I have to say yes, it did frighten me since so much activity had been reported by reputable people. I knew those words I heard, concerning ghosts walking inside and outside of the home, had to be true.

Why I wasn’t afraid to investigate this? It’s because I grew up with many ghosts and lived with them since I was a child. It only seemed normal and logic, every home had a ghost. Ghostly homes like the Myrtles are everywhere. You will find them in the north, east, west, and certainly the south.  In saying this, I discovered when I moved to Beverly Hills, that ghosts were there too. By this time I began to become increasingly interested in the paranormal.  I questioned whether a ghost would just follow me from place to place. I even questioned my own imagination. And like you, my reader, you may have heard many ghost stories and questioned if they were true? You may have wondered who the ghost was, and why it was so close to you.

While I was in New York City I met Hans Holzer, the author of over one hundred books on ghosts.  We became close friends and he explained a great deal that would verify what I already knew to be true.  From the homes in plantations of Louisiana, to the rich and famous Hollywood, and even my first boyfriend from France, I knew it was not my imagination, and it would be Hans who directed me to the right path. America is Haunted, and I wrote a book long ago in Hollywood called Beyond?, only one basically for me, one that I probably would not publish due to the fact that it was just my own personal experiences and I thought, who would be interested in me and my ghost stories, right ?

Bingo, the ghost shows were starting to come forth everywhere, as I watched year by year and everyone became interested in ghost stories, and it remains one of the world’s top questions: “do you believe or not?” Why do you believe, and what have you seen, and will it return?

Everywhere you went there was either a new ghost ball or ghost show or a radio show talking about ghosts, so I felt it was time for me to share my own stories.

It wasn’t until I met a friend, now my best friend and author, talk show host, Nancy Duci Denofio, that I found out we had similar stories. Our friendship brought me to Page Turners as a host along with Nancy and Meg Collins. It would be Page Turners that revealed the similarities in our lives.

I never spoke about my book Beyond?, nor did I reveal that I had such a book in my possession. During one of our conversations we decided since we enjoyed the topic, and believed in ghosts, that we should share it with others. One day I approached my friend with several names that would make a great talk show concerning ghosts, and I was not surprised that she chose the title Beyond?  It was as if I knew this would happen and the time had arrived to share my stories with the world.

Whenever I spoke about my stories my friend Nancy had stories that I could relate to, and when she was telling her tales it sounded as if I was telling mine, which only secured our friendship as we laughed and talked and discovered we knew some of the same people, experienced some of the same things, and as the time went on so did the coincidence of our relationship as close friends. It would be that our own personal experiences were so similar, no wonder why we connected.

It was when we were searching for a title for a new talk show, that she learned about my book and how long I held onto the stories until the right time arrived. I believed the right time had arrived and knowing how well we communicated, it could be a talk show that would be unlike any other.

I am the author of many books, and enjoy the entertainment world and the world of politics, and so did Nancy. We had a great deal in common and it continues to unfold today. You’ve heard about twins, how they do the same thing at the same time but are in different locations; this happens to us frequently. It’s rather spooky at times.

When I first met her, she reminded me of my aunt, she talked like her looked like her, and I heard the same tales from her. It was strange when she told me the same stories at the same time that I began telling her an identical one.

My love of the paranormal has come to be a passion for me, and with the energy and similar experiences I found a partner to share my voice and answer your questions.

Since we announced our talk show we have connected with both TV and radio executives interested in our discovery. We knew as they know people want a deeper meaning for the words ghost, spirit, and the paranormal.

So I am proud to let the world know, yes, the world is filled with ghosts, spirits, and many facets of the paranormal.  I am just as excited as Nancy, to listen to your stories, and help you to know the reason why you are so special.

So yes, Beyond? is heading your way.  Continue to send your emails and messages, let us know your interest, and why you would like to become a guest on our show.  We have a superior line up of great guests, and will provide you with the truth, but we have many avenues to cover.

This talk show has created itself through divine intervention.  You see, when you least expect it, without trying, fate knocks on your door.

Beyond? is now a TV show and we are talking to many syndicators to make this show a reality for our friends and fans.  It isn’t just another ghost show, but a series which takes on a case – anything beyond question – and search for answers.  We will dig into the past, present and future, but we are here for you, you are not alone.