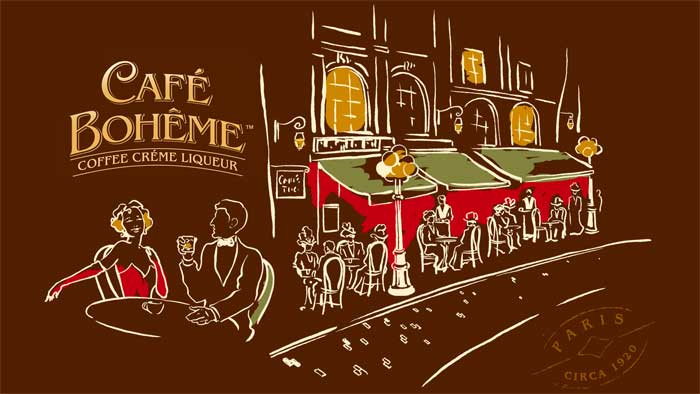 The traditional coffeehouse is never to be confused with the recent proliferation of corporate-owned and operated cookie-cutter chain coffee shops/cafes brought to us by Starbucks and others.

If you think a Starbucks is a “coffeehouse,” try dressing down, taking your guitar and smokes with you into one, sit down and light up and start to belt out some Phil Ochs or Dylan.

Correct. They are different planets, light-years removed. Starbucks is right. The real McCoy would be Captain Ahab’s.

The coffeehouse was bohemian, free-form, idiosyncratic, counterculture–and seedy and suspicious to most genteel folk. It was not a place you took your sister. The new product is by nature yuppie and mainstream, orthodox, and approved. It is Muzak in place of improvisational jazz. It is big business feigning hipness while cashing in on the latest fad—a fad its own advertising has in great part created.

Even the menus of the unreal and the genuine become more dissimilar by the month. Nothing is simple in Starbucks or, say, the Coffee Bean and Tea Leaf. The cutesy catchphrases grow more abstruse and tortured. Fancy a percent triple caramel Americano? Or maybe just a venti latte, since venti is, of course, a larger size than Grande. Just ask your daughter. “Tall” means “small,” silly.

Well, I’ll take mine black. The only novel things about real coffeehouses were Voltaire, Tolstoy, and Dostoevsky—often in person. These were places to talk about art, to theorize about art, to argue about art– even to create art. These were places to read, to write, to sing, to recite, to dance if you got the urge, and to follow your bliss, your calling, your obsession—either quietly or loudly– where it led.

(Certainly, there must have been some pretense and pseudo-intellectualism, too, but probably not nearly as much as in later periods.)

And there was competition in games of an actual intellectual challenge. No Parker Bros. Karamazov brothers were more like it.

There was chess, chess, and more chess. A tradition as old as three and a half centuries. As old as Western coffeehouses. A coffeehouse that has never been home to a chess game is not worth the name. For that matter, one that has never had kibitzers discussing and/or interfering with a chess game might seek another appellation.

The marriage of coffeehouses and chess dates back at least as far as to both Paris and London in the 1650s and ‘60s. And The Royal Game, as it is known, was no mere minor adjunct to typical coffeehouse activities, but a central feature. The Café de la Regence in Paris, established in 1670, was home to both of the best in chess and the highest in intellectual activity for about 200 years.

Legall, and his pupil, the great Philador, set up shop there, and players and frequenters in various eras included Adolph Anderssen, the visiting American champion Paul Morphy, and Ben Franklin. Voltaire, Diderot, Rousseau, Napoleon, Robespierre, and other writers and movers and shakers of our world gravitated.

In London, Slaughter’s in St. Martin’s Lane hosted an important series of games between Philador and Stamma in 1747, and later, Simpson’s Divan, in the Strand, opened in 1828 and became the most iconic of London chess-centered coffeehouses. It was regularly frequented by all the leading British, and many other European masters until its closing in 1903.

Of course, these as well as other less celebrated establishments are already well documented. But a brief review can be a reminder here of tradition. And the tradition was carried to the New World by Franklin (the founder of the first chess club in America) and others. There were coffee houses in Philadelphia, Boston, and other Colonial cities before there was a Declaration of Independence. And there was chess played in nearly all of them. 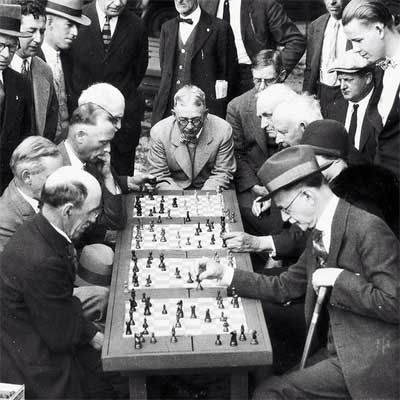 As our nation inexorably spread west in the 19th century, coffeehouses and chess were along for the bumpy ride. California officially became a part of us in 1850, and within five years the Mechanics Institute was established, and its chess club was organized.

(It is the oldest continuing chess club in the United States, a remarkable irony since it is on the West Coast.)

In Los Angeles organized chess apparently came much later. Herman Steiner, writing an editorial for Chess Life in 1947 on the history of chess in California, says that it dates back to the formation of the L.A. Chess and Checker Club, but furnishes absolutely no other details.

It turns out that the club was organized in December of 1910 with a membership of 40, but further information on the club and its development is very difficult to obtain.

By the 1930s Los Angeles was a going chess concern, with the L.A. Athletic Club, the Beverly Hills Chess Club, and Steiner’s own newly formed Hollywood Chess Group, for example, all hosting notable exhibitions and tournaments to supplement club play.

In April of ’33, for example, no less than Capablanca played an exhibition on 32 boards at the L.A. Athletic Club, and that was not the former World Champion’s only séance in the area that year. Then-current World Champion Alekhine had exhibited both at the same venue and at the Hollywood Chess Club months earlier, as a follow-up to his participation in the great Pasadena tournament of 1932, featuring the participation of Reshevsky, Kashdan, Dake, and other worthies.

The Golden Age of L.A. coffeehouses and coffeehouse chess was in the 1950s and ‘60s. This is not surprising, and it is undoubtedly true of San Francisco as well as many other U.S. cities. Widening dissatisfaction with current cultural trends and political policies will make for little islands of rebellion—even before the virtual Greenland erupted from a stormy sea in the mid- ‘60s.

The underside of emphasis on conformity and respectability is always the opposite. Ask Oscar Wilde. On one side, in the ‘50s, there were Eisenhower, Joe McCarthy, the advent of tract housing and fast food, and all they stood for– and against; on the other exploded Brando, Dean, and Clift, and Kerouac and Ginsberg and company. It was the Sharks against the Jets in a battle for intellectual and artistic turf.

While the coffeehouses surrounding the City Lights Bookstore in the North Beach area of San Francisco may have served as the actual as well as the symbolic spearhead, other cities, including Los Angeles, had much to boast of in their contribution to the burgeoning new zeitgeist spreading throughout America.

The very names of some of the leading L.A. dens said a lot: The Xanadu, The Fifth Estate, Café Frankenstein, Cosmo Alley, The Insomniac. These were homes of poetry, journalism, and literature, of human awakening and possibility, and of music for the soul–all the while flouting the Greek ideal of moderation.

In the late ‘50s the Gas House in Venice (Beach) and Mother Neptune’s on the eastern side of Hollywood led the way. Ironically, now the former is legendary and the latter all but forgotten. A Beat generation hangout yards only from the Pacific, on Ocean Front Walk, the Gas House, and its fallout epitomized much of what would transpire in the mid-‘60s in California and elsewhere.

Police raids and local political wrangling resulted from a number of customary activities and attitudes including open marijuana smoking and direct defiance of local sensibilities and sometimes local ordinances by both owners and patrons.

The legitimacy of the establishment became a cause celebre for politicians and stars. In its short three-year existence it became a rallying point for conservative L.A. Mayor Sam Yorty and others on one side, and the likes of leftists Mort Sahl, Christopher Isherwood, and Groucho Marx on the other. The ACLU got involved (perhaps not surprising because the club was financed by a civil rights lawyer, Al Matthews).

Almost five months of hearings were conducted, presided over by a police commissioner. Finally, a permit was denied on the grounds that the establishment was a public nuisance. But all this was not before bongos were heard, illicit drugs were taken, chess was played, songs were sung, poetry was both read and created, many ideas were expressed and countered, and a lot of well-known writers and musicians frequented.

In September of ’62, the building was demolished, but its spirit survived and prospered.

Mother Neptune’s, on Melrose Ave. near the eastern edge of Hollywood, was a hold-over from the beatnik era long into the ‘60s. There was still the signature jazz, chess-playing, and open marijuana smoking as late as ‘66, but the establishment was nearly as anonymous and out-of-the-way as the Gas House was self-promoting and glaring. Even the delicious detail of Doors co-founder and keyboardist Ray Manzarek first meeting Jim Morrison there in 1963 is little known.

Mother Neptune’s was essentially a home away from home to a group of old-time regulars, and several were strong local chess players. Master Jim Lazos and Experts Dave Conwit and Paul Quillen lounged there night after night. Some informal competitive chess was played, but it was more the sharing of recent tournament games and lengthy sessions of analysis.

Anecdotal tales of outsiders stepping into this lions’ den of chess skill are virtually nil: it was too obvious that these were the big leagues. Yet there lay an irony.

While the establishment itself was far from the Ritz, these three stalwarts of the chessboard were, on sight, another rung or two down. Lazos, for all his formidable chess strength, was an alcoholic derelict, literally homeless during many periods. As for Conwit and Quillen, it was rumored that they had both learned the game in prison—and it was a supposition not easy to dismiss.

Both were the personification of unapproachable: physically big and obviously strong men, they spoke little, glared hard, and gave the unmistakable impression that a great deal of unpleasantness might result from even an innocent misunderstanding with either of them.

A lot of chess was also played at some other L.A. coffeehouses of the time. Both the Xanadu, near L.A. City College, and the Fifth Estate, on the Sunset Strip in West Hollywood, deserve special mention. The Xanadu was probably the residence of the highest general level of intellectualism and meaningful activism in the entire area, and Art Kunkin was hammering out the first issues of the L.A. Free Press in the basement of the Fifth Estate as the chess pieces flew above.

Both of those venues merit lengthy articles of their own. And so do other establishments of the selfsame ilk. Further, there is a book waiting to be written regarding the L.A. coffeehouse scene, and its chessic connections, during the period of the late 1950s through at least the early ‘70s.

But meanwhile, I’ll just have a steaming hot black coffee, and a board and pieces. Hold the cream and sugar.