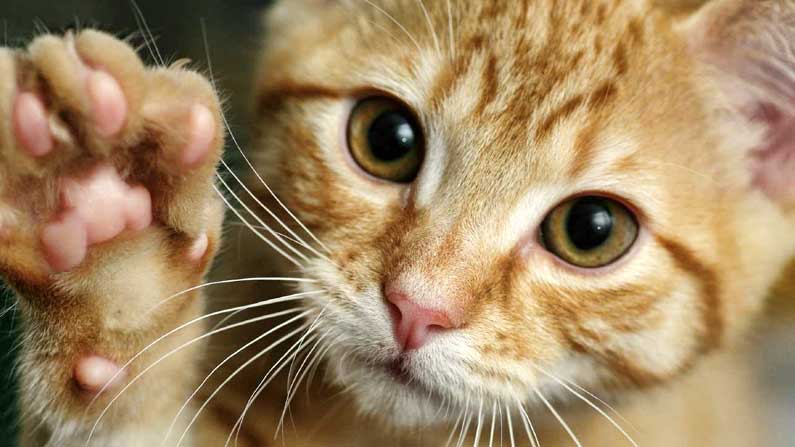 Scratching is one type of feline marking behavior. It is vitally important to the cat’s health, for both physical and emotional reasons.

First of all, scratching feels good to your kitten. When he reaches outward, sinks claws into a surface, and then draws them back towards himself, he flexes and exercises his shoulder muscles. Think of clawing as kitty calisthenics that helps keep his muscles toned. For that reason, cats often seem to enjoy a scratch after they wake up from a nap.

Clawing also strips away the old outer claw coverings and reveals the sharp new nail beneath. This keeps the kitten’s toes and claws healthy. Trimming his nails reduces the damage potential.

Finally, the visible claw marks communicate to the world that the target (and real estate surrounding it) is owned by Kitty. Scent glands in the paws leave similar messages. Clawing typically targets “important” places, such as near a favorite sleeping place, the food bowl, or a favored pathway like the hall into your bedroom.

The key to scratch-training your kitten is to offer him an irresistible target in the perfect location, so he doesn’t feel the need to seek other options. Introduce him to the scratching post by kneeling down and pretending you’re a cat—scratch the post yourself in front of him. Don’t forget to tell him how good it feels, and what fun you’re having. That’s often enough to get Baby to test the object himself—and get hooked. You can also tease him with a feather or ribbon dangled against the scratching surface so that when he grabs for the toy, he feels how great the scratching post is.

After choosing the right style of post, the most important training consideration is where to put it. Because clawing is a marking behavior, Kitty wants the whole world to see his scratch graffiti. Hiding the scratch post in a backroom defeats the whole purpose of marking.

Think of all the reasons why your kitten claws, and use them to find the perfect location for the post. Kittens often claw more than one place in the house, too, so don’t limit him to a single post-offer him several in all his favorite locations: near his bed, where he eats, and in the living room where the family gathers. He wants you to see, and admire his scratch graffiti.

Now that you understand what’s involved in why your kitten claws, and what she needs out of a claw object, you’re ready to begin the re-training process. Don’t expect to heal the problem overnight. It will take patience, and there will likely be some relapses, but with diligence, you can both be satisfied.

I'm a certified animal behavior consultant, and author of 24 pet care titles. My work also appears at cats.About.com, at catchow.com, and I'm the radio host at PetLifeRadio.com "Pet Peeves."