As we approached, the smell of freshly made popcorn filled the air, the twinkling lights told of the fun about to be had, and the happy music playing created an atmosphere of unmistakable excitement in my young mind.

Time seemed to slow down as we parked our Chevy and walked towards the music and beckoning bright lights.  I took my mother’s hand and tried to behave and not run to the gated area of rides and sweet things to eat. 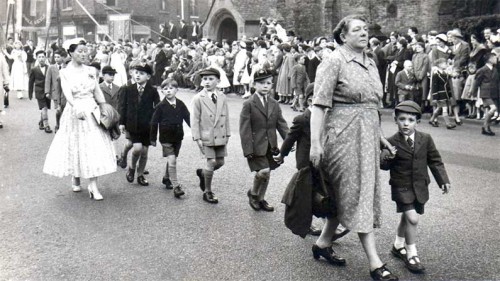 More years ago than I am willing to admit to being alive, I once was a young, Catholic boy who would on special days be allowed to visit my uncle, a priest, who would be having a benefit for his church which was called by the special name of a “bazaar” by my parents and other grown-ups of my family.  It was a very special time for me, a very studious child who lived on the other side of loneliness for the most part, but on this day, I was a very happy young man.

There were games to be played, rides to go on, and, in my unique position of knowing the man in charge, I had a special treat in store for me, which was something that everyone lovingly referred to as a “small fortune” from the man in charge of the proceedings a.k.a. my uncle.  It was actually a handful of quarters that I was periodically given to be able to participate in all the games I wanted.  Being from the poor side of the family and unaccustomed to be given just fun money, that small fortune made me feel very special indeed!

I rode rides, ate myself sick, spent many small fortunes, and had a great time and got to stay up late.  Imagine me, an often-troubled young boy who wore a serious and worried face as a mask almost every day, having a carefree break without any worries on that day.  As a matter of fact, if my memory is correct, when we left I fell asleep in the car and dreamt happy dreams and not the nightmares I so often had.  Still sleeping and dreaming, my father carried me up three flights of steep stairs and carefully put me in my bed.

Despite the many worries and stresses of my average day of embarrassment over the way I needed to dress and the laughter of the other children because of the holes in my shoes, this memory is one that I look upon fondly to this day.  Despite the frequent arguments between my parents and relatives, the shame of not being as good as the other children, and the terrible shyness that prevented me from easily making any friends in the crowd of people my age who surrounded me always, this day of carefree fun was the one I remember with a smile after all these years.

I may have had many tears in my childhood, but I will always treasure this one day!

I am disabled and love to write! I am a self-published author as well as being published in various literary magazines.

Branka Cubrilo Feb 18, 2014 5
Quality vs Quantity The other morning we all witnessed that Angie had revamped her look: it looks savvy and…
Publishing