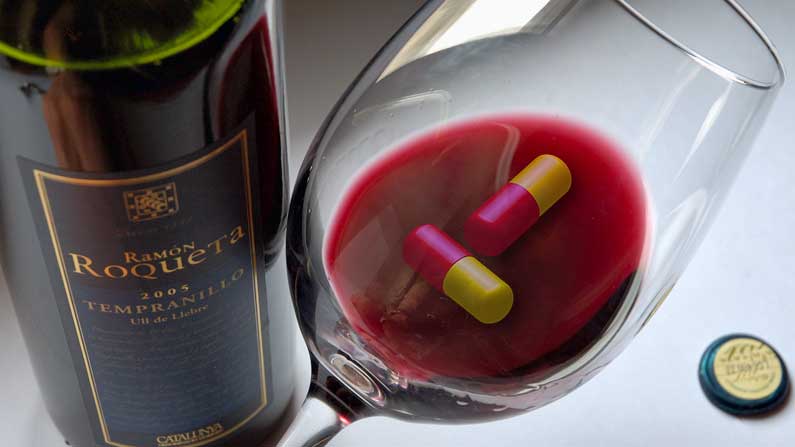 Q: Should you always avoid alcohol when taking antibiotics?
A: No. But nasty interactions can occur with a small number of antibiotics.

If you’re someone who enjoys alcohol, being on antibiotics can be a bit of a spoiler. After all, juice and water aren’t what first comes to mind when you’re invited for Christmas drinks.

But are antibiotics really a reason to steer clear of booze?

It depends which antibiotic you’re taking, says Brisbane clinical pharmacist Dr. Geraldine Moses. There is a proven unpleasant interaction between alcohol and antibiotics, but it happens with only a specific handful of antibiotics, Moses says. When this occurs the breakdown of alcohol is interrupted, resulting in the build-up of a chemical called acetaldehyde, which has a number of spectacular effects on the body.

“Blood vessels in your skin dilate, so you go red as a beetroot. Blood is taken away from the central parts of the body, so your blood pressure drops and most people faint. And the acetaldehyde stimulates the vomiting centre in the brain, so you feel very sick and usually vomit. It’s not a good look.”
Theoretical risks

With all other antibiotics, any interaction with alcohol is “theoretical at best”, Moses says.

While some people say alcohol can reduce the effectiveness of antibiotics, there’s little evidence to support this. Even if there was, alcohol breaks down in the body relatively quickly. So drinking a glass or two at dinner is unlikely to significantly interfere with an antibiotic taken daily for five to seven days.

And the claim antibiotics make you get drunk faster is without foundation as well.

But if you’re taking antibiotics because of tissue damage of some kind – say a bad graze or a muscle tear – Moses warns alcohol impairs healing by restricting blood supply, so is best avoided in the short term anyway.

And antibiotics may have a variety of side effects – such as sleepiness, dizziness, agitation and gut disturbance – which may be made worse by alcohol.

There are only three antibiotics that realistically carry a risk of the nasty ‘fainting and vomiting’ reaction (the so-called ‘disulfiram reaction’) when combined with alcohol. They go by the catchy names of metronidazole, tinidizole and trimethoprim-sulfamethoxazole. But they are marketed under many different brand names – the most familiar being Flagyl, Fasigyn and Bactrim respectively.

You don’t need to drink much to be at risk; the reaction has been reported after as little as 170mls of beer. So it might be wise to err on the side of caution and avoid all alcohol and products containing alcohol, such as mouthwashes, liquid herbal remedies, and cough/cold medicines while taking these antibiotics.

“Sensitivity to alcohol does vary between individuals,” Moses. “It’s probably better to be cautious than cavalier.”

While trimethoprim-sulfamethoxazole is less commonly used, the other two are often prescribed for infections in the gums or intestines. There’s a good chance you’ll end up on one if you drink water infected with the common parasite giardia, for instance. And they are also frequently given to treat infections after childbirth, both natural and cesarean.

Thankfully, you won’t need to commit the culprit drug names to memory as they always come with prominent warnings, either on the label or in the consumer information leaflet (which may not be entertaining but is important to read).

But you won’t find warnings about mixing alcohol with other antibiotics, such as penicillin – simply because they aren’t needed.

“Certainly there are many medications that do have alcohol warnings,” Moses says. “But with most antibiotics, frankly, it’s not a big deal.”

So while there may be plenty of good reasons to decline a glass of champers at the office Christmas party – reducing the odds you’ll embarrass yourself at karaoke for instance – in most cases, being on antibiotics won’t be one of them.

Doctor of clinical pharmacy, specialising in drug information. She works part-time at the Mater Hospital in Brisbane in the Academic Practice Unit. She also consults to various organisations on pharmacy matters, including the Department of Veterans Affairs, the National Prescribing Service, the Health Quality Complaints Commission, and contributes to under- and post-graduate education for pharmacists, dentists, doctors, optometrists and nurses at the University of Queensland and QUT.

Pat Bertram Feb 20, 2013 1
Which is more important, character or plot? Some people think the character is most important, others think the…
Publishing