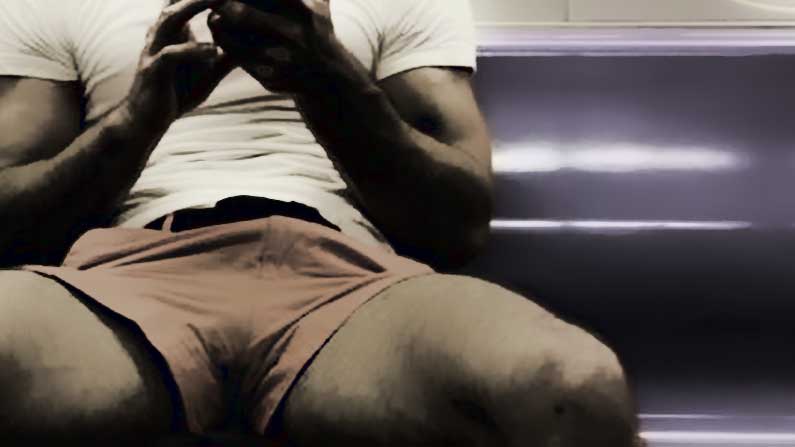 Manspreading?!  –  I will begin with the serious part, but most of this will be sarcastic. This New York Times article will explain.

I grew up in New York City, Brooklyn, to be exact. Therefore, I grew up riding the subway. I normally try and sit in the corner seats, to be out of the way. I give my seats up for the ladies and those who need it. I had no idea spreading one’s legs sitting on the subway had a name.

I have a certain distance to keep my legs. I will do what makes me comfortable, but not sprawl all over. I would rather get up. I would be angry if the actress mentioned in the article, Kelley Rae O’Donnell, filmed me and put it up, but would rather just get up and move on. I think this is silly for the most part and now for the sarcasm, which I am laying on thick.

Manspreading?! I’ve heard of chain spreading and seed spreading, but manspreading?  Does this mean spreading men on bread?  Picture a sandwich shop. What would you like as toppings on your man?  Sounds kinky and I am not sure I want to cross such a barrier.

The women I work with swear that guys can’t keep their legs together. Ah, so that’s what manspreading is. The other unnerving thought that came to mind was the Greek hero Theseus dealing with the criminal Procrustes, who would either cut legs off or stretch the body to fit his bed. See, more manspreading.

Then the subject of male testicles came up. Allegedly, that’s why we have to manspread on the subway.  Oh brilliant, I just made that into a verb. Now, I am becoming even more unnerved. Instead of Rocky Mountain Oysters, New York Oysters, and not the type from the nearby Atlantic Ocean, served at the Oyster Bar in Grand Central Station. I’m wincing writing this.  I am imagining all these police shows, with the cops screaming, “Down on the ground and spread them.” More man spread.

I may be a bridge and tunnel from Brooklyn but now live in Arizona. If I have to sit on the New York Subway in winter, I’m going to be wearing my Stetson, leather jacket, and sweater. Don’t worry; I won’t be wearing chaps or spurs. If I got on a poor horse, the ASPCA would be after me, for breaking its back.  I need room to manspread for the .357 Magnum on my belt. We Arizonans like our space.

Kelley Rae O’Donnell, you are scaring me. This could go badly. You may just have an iPhone now, but what if she is now like the Passover avenging angel, against Pharaoh, or Graham Chapman playing King Arthur in Monty Python and the Holy Grail? This is another example of how Monty Python has ruined my life. I have a Facebook page with that title.

I can only imagine Kelley being told off by Manspreaders and slicing off legs spread apart or stretched in front of them and the testicles being lopped off. I would hate for the trains to be taken out of service, to be taken to the yard, where cleaners in HAZMAT suits would have to clean them. Can you imagine transit posters with bloody subway cars? Manspreading would stop in a heartbeat.

For those who remember Lorena Bobbitt, be afraid gentlemen, be very afraid. It gives new meaning to the term “ballbreaker.” Picture after Graham Chapman lops the limbs from the Black Knight in Monty Python and The Holy Grail.  Torsos on seats, facing each other, like chess pieces.

Are there solutions? Separate subway cars for men and women? People who fly coach on airlines will understand tight seating. Are there going to be measurements for fitting the seats?

I’m working on a novel about the Gullah Sea Island Culture off the Georgia Coast. I’ve done a lot of research for this book, including slave ships. This made me think of the horrific narrow spaces on slave ships crossing the Atlantic from West Africa. A friend asked what I’ve been learning writing this book. I felt sick as I said; one skill is packing West Africans into slave ships. Now THERE is a 21st Century skill for you…NOT!

I thought of the Tokyo Subway, with the men pushing people into the trains at rush hour. No manspreading there.

I am concluding this, by taking two aspirin. It all started, just because I read an article in the New York Times. I may have to curtail my serious reading and stick to silly.

How Happy Are We Really?