Every Yoruba Kingdom has always been able to identify and trace its roots to the cradle that is to say you will find every Yoruba city, village, or even hamlet tell you tales about how they came from the ancient kingdom of Ile Ife.

Ile-Ife also has its own story, it is the story of creation, how Man came to be and the concept of the eternal struggle between good and evil. Sometimes in the struggle, gods and goddesses are apportioned powers, responsibilities and I always found it very refreshing that very much like the Greek Pantheon, the Yoruba race has very human gods and goddesses whom they see as errand mortals achieving immortality after fulfilling their specific tasks on earth. Thus the concept of Destiny, Fate, and Karmaic returns originates from the Godhead and is given recognition in the lives of the average Yoruba man or woman. 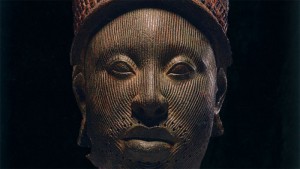 Civilization has arrived and we have accepted its sometimes doubtful benefits but the average Yoruba man is deeply rooted in his native religion no matter how much allegiance he is expected to give to the new fancied imported religion. You will find thus in every city a patron god or goddess that the city has deified for one thing or the other.

In Owo a town in the Ondo State, a goddess, has been deified and is worshipped and commemorated very faithfully every September. I call her very simply our own Venus, the goddess of Love but she is better recognized as ORONSHEN. That was not really her name, but it is the name that every citizen and visitor remembers her by. Now simply translated ORONSHEN means “No TROUBLE HAS OCCURRED” it is in direct contradiction to what happened and what led to her worship.

As the myth or story goes, Oronshen was a half mythical woman that the king of Owo kingdom happened upon at night in the forest as he and his warriors took a much needed rest from the infernal inter -tribal wars that was the bane of the Yoruba kingdoms. As the story goes, the king watched a beautiful creature take on the shape of an exquisitely beautiful woman and was intrigued. He traced her to a vassal town as a stranger living with a hunter. She attened a festival of the king and the king fell in love with her. Before she agreed to become his wife she explained that certain taboos must be maintained. These taboos were simple enough but she insisted it must be kept. The besotted king agreed and a marriage took place.

Oronshen ‘s arrival at the palace upstaged all the other queens breeding jealousy, hate and anger. She was also reputed to have made the king very wealthy by some magical art of excreting priceless corals. Naturally the king had no more time for the other queens in the palace. A plan was thus concoted by the enraged and neglected wives. They plied the king with palm wine until half- drunk he disclosed the true nature of his strange queen. War broke out and the king went to defend his territories, In his absence, the queens took their revenge and openly broke the taboos of Oronshen, who left the palace in distress.

When the King returned, he sent warriors on a desperate search for her, they met her at the mouth of a grove and she refused to return rejecting all pleas. She however relented enough to offer to be a protector of the kingdom requesting that the king with his subjects must return to the grove every year to supplicate her in they ever were in distress or needing help of any human nature. The spot where she indicated was thus identified as Ugbo Laja (the reconciliatory grove).
Fact or Fiction: Archeological digs at the Ugbo Laja have confirmed that the grove had been a repository of clay pots, offertory carvings and such stuff dating back to the assumed time when the festival of Oronshen was suspected to have started. These relics have been carbon dated and give credence to the story.

To this day, as the month of September draws near, there are precise announcements to the people of the town. Beating of drums and such merriment is forbidden. The warriors do a special ceremony with long sticks in a fairly secretive ceremony exclusive to the lineage of the warriors who first went to search for the queen. A particular quarter of the town carried this singular responsibility. There after the king proceeds to the grove for the prayers and supplication. He is decked out in a beaded blouse, a white wrapper. The king has golden swords and heavy coral beads (symbols of the wealth of Oronshen) on his wrists. Infact the coral beads about his person are so heavy and plentiful that two chiefs hold his arms as he makes his way from the palace to the grove. The solemnity and pageantry of the event has made the event a tourist attraction to Owo. The trip to the grove serves as the climax to the festival. However an exclusive festival of the queens who had naturally become devotees of ORONSHEN also takes place within the palace premises.

Modernism, Religion and Commerce: Oronshen has evolved over 600 years into a planned and well orchestrated festival that spans a 24 day period. Its tourists potentials are being harnessed to create and enhance the economic potentials of the town to its sons and daughters within and outside the country. Purists of Oronshen worry that Modernism may soon erode the real social and moral benefits that Oronshen had for the people and a tribal tradition and legacy may soon be lost. Society thrives on change and has a tendency to be deaf to the lessons of its past. One of the effects of colonization and modern religion on our culture, ethos and customs is to create a sense of shame in all things native as it had been translated as barbaric.

There is the other view that change is a necessary force, darkness is the absence of knowledge, so the town needs to exploit modernism to bring the savage things we did in the past into the light of reasonable civilization.