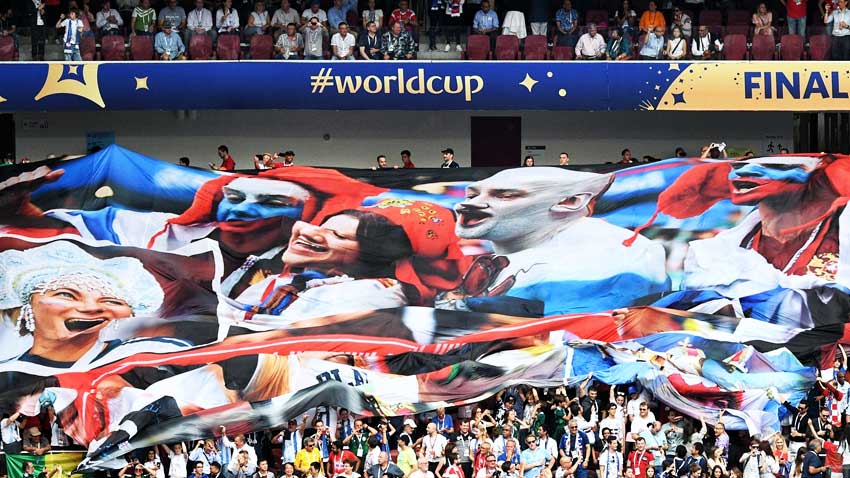 I have been watching football. No matter our troubles, fuel subsidy removal, corrupt politicians, and extremists, football brings us close together, and we laugh, agonize and scream while the game lasts.

You can also be very sure that for the duration of the game, we are tribeless.

So Saturdays are happy days as husbands abandon homes to head for a stadium or a clubhouse to watch the round leather game as the men call it. The wives take time off to do their hair in the million braids or whatever fancy name we live by. Now from my younger days, I have always been amazed at our insistence that a team cannot win a football match fair and square.

We insist that they must have gone to the gods to appeal. We defend our goal posts with magical art, and some are known to have incisions cut into the goal-scoring feet to make them invincible to the other side. This is a grave issue during the rains when the professional league is on efforts are redoubled that the rains can only fall on their terms.

So rain is not allowed to fall on Saturdays. It is a firm conviction. My sons reminded me of what had happened when Nigeria hosted the U-17 FIFA World cup some years ago. I recalled we also then had forgotten our frustrations with electricity, water, and practically any form of amenity we hoped would make life bearable.

I do not like football because I simply think it is silly watching twenty-two able-bodied males chase a round leather on a field that could be put to better use. And with some thousands hollering and making all types of gestures. My family will groan if they read this. I am not writing about that actually, but something interesting as the papers reported the matches daily.

There was one exciting report from my Eastern daily, that paper that a match had to be postponed in one of the venues because the field was waterlogged. There were groans, frustrations, and pontifications about our efficiency or lack of. After all, people argued that we had fair notice that some people were coming to play from other countries, so how come we did not make enough preparations? What struck me and caught my attention was a piece of news tucked away in one of the pages of that daily, it gave reasons on why the field was waterlogged.

The reporter suggested that we might have been able to watch the football if we had done some of the precautionary things any self-respecting organizer in the southeast takes into consideration. We should have made use of the services of the rainmaker! I blinked when I saw that piece, looked again, in fact, I went for my glasses because you never know I may have been imagining this, but no, there it was in black and white!

We had that problem for two reasons, the reporter wrote, one reason was the governor who should have contracted the astroturf to a professional had been greedy. And in his penny-pinching endeavor had given the contract to someone who could not do the job properly! The other reason the reporter gave was that the organizers had not thought fit to invite the rainmakers to ensure that they will be no rain on match days.

He pointed out reasonably enough that the rainmakers were pissed off and so had ruined the match for everyone. I bent over laughing. Years later, I still remember and chuckle because it underlined one vital thing for me. No matter how educated we claimed to be or enlightened, or westernized, scratch a typical Nigerian, and you will find he takes his traditional religion seriously.

If he seeks medical help for his ailments, and it does not seem to be working for him, he will return to the elders to ask the priests to divine for him.
You will find in every street corner women selling herbal remedies, and until recently, they were a regular feature of every garage. Men seeking to get married, and women looking for prince charming, will as insurance quietly visit a diviner to read the stars to enhance their marital chances.

So this Saturday, as my sons got ready to demand a refund for their money from the charlatan priest, I also recalled that for them the services of the rainmaker were very vital to the soccer success. I smiled as I also recalled what had happened when I showed that same paper to my friend and a cousin who were visiting. Well, my friend looked at me like she would humour a silly child and asked if I was not aware of the importance of rainmakers for any important event.

“Haven’t you noticed that rain hardly falls on Saturdays”? She asked with eyebrows raised at me for my ignorance. I said I had not paid it any particular attention. She shook her head at me in pity. “Saturdays are party days, when we get married, bury our own relatives, parents, or turn over the bones of those who had departed some twenty years before or more. This is the season, and no one was going to allow some silly rain to put a spanner in the preparations! Thus the prudent event manager will add the cost of the services of the rainmaker to his bill for you. It goes under the innocent title of ‘contingency’”

What I found odd was that no one seemed surprised about the rainmaker story. I asked my friend and cousin if they really believed in the ability of someone to hold off rain from falling, and they laughed at me saying my ‘book knowledge’ had made me silly. This is Africa, they reminded me, and of course, it is quite possible to hold off rain if you had an important thing to do like an international football event, and what were the organizers thinking to allow rain to fall so that they lose face? Hmm.
What has civilization done for us really and truly, I wonder?

We are neither truly African nor properly westernized as our deeply ingrained culture comes to the fore at the slightest puff of trouble. If we really can stop rain at will, shouldn’t we export this art for the benefit of those countries that experience tornadoes, tropical thunderstorms, Monsoon et al? My cousin stared at me and shook his head in real sympathy for me. Then he intoned in a tone that brooked no dissension.
‘The gods do not speak English!’
My friend chimed in, “neither do the gods understand a bride with the wrong colour”

Conversation With a Nigerian Female Author