In my tribe, getting married in the old days followed a set pattern designed only to bring the right persons to each other and reduce as they as they a mismatch or unhappiness as divorce was rarely considered unless you were accused of being a witch and made to confess, not an easy option I can tell you.

The procedure was fairly simple, first you saw the girl you wanted that you will refer to as your flower, and you whispered to your friend that you have seen the flower of your dreams. His assignment begins. He checks out the name of that family, if they are of the right stock, family histories and tragedies. When he is satisfied he accepts to be the go-between to arrange a meeting. He offers to take messages until the ‘flower’ agrees, he is thereafter referred to as the ‘alarena’. When this messenger of love is sure the flower is agrreable to the idea, he lets his friend to know. The intending suitor ‘pinches the wall’. That means he makes contact arranged by this friend. His job is deemed concluded when the two meet. The next stage is strictly private between the two young persons. 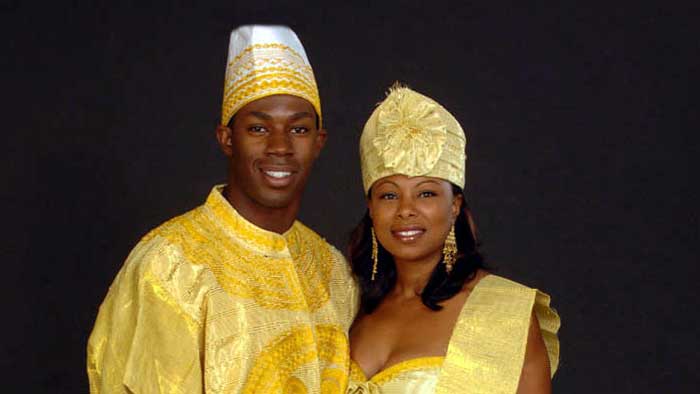 The groom now tells his father that he has seen a flower in a house and would like to pluck the flower. The language is understood and the father now makes his own enquiry which would include consulting the oracle to determine the stellar radiations of the intending couple. He would need to find out from the oracle if there is any heavy karma hanging over his son if he should approach the intended bride’s family. He would need to investigate any history of barrenness, epilepsy or strange illness, if the family had at any time being cursed.

These investigations are done discreetly, which will include consulting the oracle, pronouncements from the oracle are taken very seriously. This done, he checks with the head of the family if there are any remote or close links with any other member of the family. The girl is watched closely and her manners, interpersonal relations, whether she is respectful and restrained. They also want to know if she carries the potentials to give sons and daughters with a silent unspoken emphasis on her ability to bring forth a male heir.

On the other side, the girl also confides in her mother. The mother will then question her very closely to know if she is still chaste and virginal. She also seeks the advice of the oracle on behalf of her daughter. If the potential groom is likely to be a good provider as well as an asset to the family. She also hopes that her husband has not his eyes on anyone else and seeks opportunities to find out. She becomes extra solicitous of his welfare. In the olden times, only the men consult and the girl never knows what is happening until she is called to a meeting and her groom is pointed out to her with sometimes tragic results. In those days, the girls were generally married off to much older men. But things changed gradually and these investigations are thus done more these days. (I am talking about my mother’s era here.

I fancied myself in love and brought the groom home very much like the Western culture).
After the boy meets girl has been done, the intending groom makes an attempt to be friendly with the family of his intended bride by offering to help the mother in law to be to split wood. Coming to his father in law’s farm to help in clearing, weeding of his farm and generally make himself pleasant. He is under close observation but nothing is said. He is not seen to openly seek the attentions of his bride but will make himself available to his in laws for whatever work he thinks they will need to have done and will start first by bringing in palm wine to his father in law, then he would also bring the occasional tubers of yam.

When both parties have been satisfied with their independent findings, the groom’s family come ‘knocking’ on the door. They request to take a flower from the house of the bride. The bride’s family act dumb and ask them to go ahead and pick the flower feigning bewilderment that they don’t own a garden.

Finally the father in law if he is satisfied with his own observations and investigations will tacitly agree that he is willing to be approached by his intended in laws. This is generally seen as the formal introduction of the two families. In my tribe, couples do not get married, but families do. All the important family members from both sides are asked to get to know each other. It is also a time for the ‘wives’ of the bride’s family to show their willingness to receive a new member. They will host the groom’s family and make a lot of show of respect so the groom’s family will be reassured that their own wife is coming to them a respectful virtuous young woman. A date is thus fixed for the formal cementing of the relationship.

That is when the fun begins; for the groom’s family will now through several songs, dances try to explain that they have come to collect a flower, that this particular flower is so fragile that it could not be in the garden but has been in the house. They eulogize the beauty, piety and desirability of this enchanting flower for one of their illustrious sons. They insist that this son of theirs has been ill with longing and begged them to come and hence they have come to make enquiries. The bride’s family become sympathetic and start calling on the damsels in the house to come and be identified by the groom’s family. They parade all the ladies, old, middle age and very young but will keep the intended girl away. Each of these ladies is presented veiled, and the groom’s family are made to pay or plead to be shown the real bride they have come to ask for.

Finally after all types of promises has been extracted by the bride’s family, the intended bride is brought in attired in the best traditional costume the family could muster. The groom’s family go wild with joy and she is given a rousing welcome with lots of beautiful songs. Now the formal marriage in the traditional way starts. They groom has brought yams to show his suitability as a provider. He has tied a goat to the family gate, a bottle of honey is in the basket being carried by one of the young girls from his family, kolanuts, tiger pepper, gin, kegs of very fresh palm wine. If the bride is from the family of a high of a high chief, these gifts are doubled followed with lots of pomp and pageantry with horns blaring and drums.

Then the groom salutes his bride’s family with a prostration of respect while the head of his family also do the same. They are accompanied in this homage by friends of the groom, his brothers and well wishers. The bride’s family welcome him as a son. Then there is the serious business of negotiating the bride price. Before the bride price is paid, the bride is required to collect from her intending husband, what is generally called the ‘pinch the wall’ price!

This is the money for her acceptance to talk with him when his emissary came to her. It is her money by right. She also collects money for agreeing to listen to his petition. The ‘wives’ of the family lead her veiled to the gathering and demand these costs on her behalf. They also collect for their efforts in bringing her out. Thereafter she is led to kneel in front of her parents for the parental blessing. She calls on her mother through songs to please pray for her as she is going to start her own home and asks that she finds good fortune there. It is usually an emotional moment as the mother generally breaks down in tears as she prays and symbolically hands over her daughter into another house.

Most families in my tribe do not collect a bride prize saying that they gave away a daughter and express a hope that she will be treated like a daughter in her new home as they generally add that they have gained a son too. A string of do’s and don’ts is reeled out in compensation for not collecting a bride prize. The merriment starts thereafter and nobody really notices when the groom has departed. Unlike the Western custom, the newlyweds do not leave together. It is traditionally expected that his bride must find him waiting at home. The members of his family leave too saying they will come for their bride in the evening.

Now in the evening the female members of the groom’s family return and are ready to escort the bride to her new home. A young sister or young relative from the bride’s family is asked to go with her. The sister or relative becomes her companion and helper in her new home. She is required to take special care of this young person and so they leave for the new home with songs too. Just at the entrance of her new home, her new relatives, particularly the women perform a mini ceremony. It is called the washing of her legs, so she can step into her new home with clean legs.

It is also a silent prayer that she has not entered her new home with two left legs. So water is poured over her legs and she is literarily carried over the threshold into her new home. Her mint new husband is now required to do his first marital duty while his relatives wait patiently outside. This is his first conjugal duty, which is taking his wife to bed on a white bridal sheet. He must be able to show through the window that he ‘found her at home’ that is to say, she is a virgin. When he presents that ceremony and confirms the bridal stain there is jubilation outside and the bride’s mother receives presents for having raised a virginal bride.

It also enhances the bride’s position as her mother in law is happy and she will treat her daughter in law with a level of reasonable consideration as they anxiously await the first fruits of the womb. However that bridal confirmation concludes a mutually satisfactory wedding.

The line is blurred now, all types of additions have been added leaving the elders sad and puzzled. They wonder that we have exchanged what had served the common morality with a liberal mix of customs that are foreign and ill suited to our temperament.