My husband is the firstborn son but the third in a family of seven children. Every one of the seven siblings has distinct personalities and not one of them is a follower.

When it comes to neatness though, that attribute is manifested in degrees from unbending to laissez-faire. 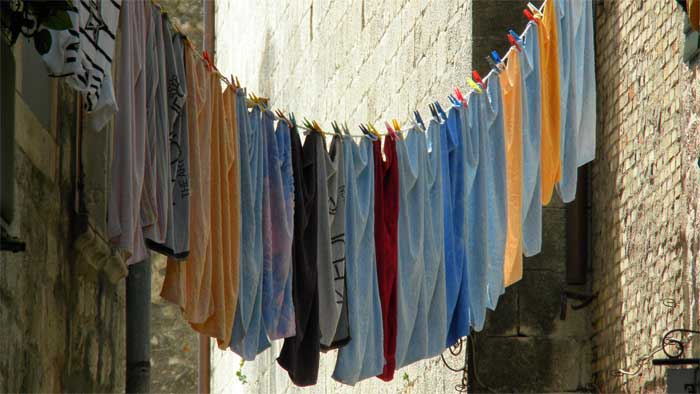 I’m still not sure if it is because my husband was the first son that his attitude toward picking up or, better stated, not picking up after himself, was due to that fact, or that he’s a man. Now I know some of you will say, ‘Yup! Enough said.’ But I’m not sure.

His mother told me when I inquired as to his messy behavior, she found it easier just picking up after her kids.

First, you need to know she was a super mom. She worked, she birthed eight with seven surviving children who all adored her and miss her since she’s gone on. She cooked, baked, canned, kept a spotless home and pretty much hung the stars out at night. This is a tribute. I loved her too and have tried to be the kind of mother in law she was to me. She said, “All sales are final and if you must part because of an argument, I expect you, not him on my doorstep.” Consequently, we both stayed home and settled things; sometimes quietly, sometimes loudly but settled them ourselves, we did.

I, however, did not pick up after my sons after the age of seven. They were expected to keep their own rooms clean or to keep their domain door shut.

Our home was never neat but contrary to some relatives thoughts, was not dirty. There is a distinction. My home still isn’t neat. I have a home based online used bookstore so we are now surrounded with ‘stock’ and we are sharing our home with our son and his wife and they are collectors of films and games. We all have our vices which cause clutter.

Oh, did I mention the five rescue dogs, the rat who is masquerading as a mouse, the rabbit, and the bird, .. and 117 fish? No? That’s another story.

To a newlywed who grew up in a home where almost everything had a place and it was in its place, finding socks under the dining room table or clothes, unless shed in pursuit of joint enjoyment, was a jarring surreal sight. But after a bit, I got used to seeing the crumpled black objects here, there and everywhere. That’s when there were two of us.

Shortly after our first son was born, we moved upstate New York so hubby could go back to college, I would finish my second pregnancy, and we as a family would live on his family homestead.

His younger sister now resides in that home which has seen many renovations over the almost 200 years of its existence. There is reputedly a ghost in the attic and as I’ve heard footsteps over the master bedroom, I’ve got to concede that’s true or the squirrels’ have donned shoes and decided to spook the current residents. Also the squeaking rocking chair, but I figured that was probably those pesky squirrels wooing and worse, creaking away.

It was a ten-room house when we lived there so there was lots of cleaning to do after five years sitting idle with only the ghosts and the local rodents in residence. I cleaned [yes, I know how] the dust, dirt, and debris with a roll of toilet paper in the front pocket of my Mau Mau. My eyes and nose were in for a real treat, but after three weeks of cleaning I could breathe and the liquid dripping from my eyes abated and we settled into our routine of being a young family with one and a half children.

Since my husband usually got undressed in the bathroom so he could take his nightly shower and walk the length of the house in all the glory the Lord bestowed upon him, I placed a hamper in said room. The bathroom, fortunately, was big enough to dance in if one was so inclined so placing that and a chair to sit on was a finishing touch for that room.

The strangest phenomena occurred the first night the bathroom was finished; said husband decided to get undressed in the master bedroom and that continued until I got a second hamper to put in the area of the shed clothing in the bedroom. Then he alternated undressing between upstairs and downstairs with the clothing always making it to the floor right beside the hamper. That is, most of the clothing. The underwear was stored elsewhere; where I finally started to leave it [instead of nightly retrieval] until wash day. That would be Saturday when he was home and we would all troop to the local Laundromat.

After months of gently trying to lead this man into actually making a slam dunk into one of the hampers, I decided not to gather his underwear from its normal spot. He always watched our son when we were at the Laundromat and I would ‘do the wash’ so he was unaware that he did not have clean underwear until Monday morning when he was getting ready for school.

He had seven pairs of socks and seven pairs of underwear and on Saturday night I usually laid out his undergarments on the dresser top. Then the following week’s clean outfits were hung in the closet or neatly folded and put in our dresser; he with the top two drawers, me with the lower.

You have to understand that my husband was a clean freak even though he did not contribute to that state. Remember his mother: she of unending energy and movement. My husband was somewhat surprised that I liked to sit and read; not bake and clean. After my first serving of cookies, he conceded it was better I read.

That fateful Monday morning dawned. As we usually did not spring out of bed but rather lingered until the last moment he needed to leave, I was still abed, not in my usual race to feed him, so I was able to see the confusion and shock when he found not socks and underwear but an empty void.

Turning, he asked, “Where’s my underwear?” I told him I washed and folded all the clothes in the hamper and they must not have been in there.

He said, hands on hips, “You know darn well they were not in there. They’re in their usual spot!” Asking, “Where would that be then?” He answered, in exasperation, “under the bed, of course!” Wide-eyed I looked at him and replied, “That’s a funny place for the underwear!”