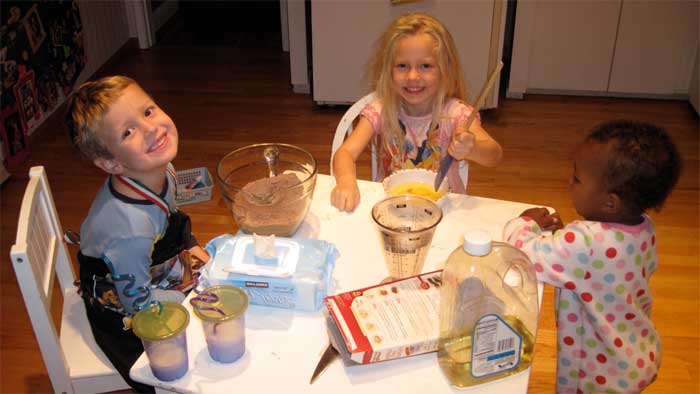 I must admit when my son left home my heart broke.

He was ready to tackle the world on his own and I just knew my job as a mother was not yet done, but I was wrong! He is doing well and I am incredibly proud of that boy of mine turned man, and then there are my amazing girls!

They are the neatest kids, so different from each other. One a diehard soccer fan and one an animal lover that’s so creative and full of imagination that I love to watch her play.

She’s the one that’s a handful by the way. She’s unique and has an imagination I can truly appreciate. This weekend was a perfect example of her individualism shall we say.

She had begged to have her little friend spend the night, which wasn’t a big deal since her friend is lovely. They were playing and having fun when all of a sudden my daughter appeared with a box, a large box.

It contained an easy bake oven. I kid you not when I say it had been in the box for two years. She had been digging through her closet like most kids do and pulled it out.

Now the reason she had not pulled it until now was simply this when Santa brought the oven she was not impressed. She had wanted a pony and really, easy bake oven, pony, please! She was disgusted and the oven went into the closet and that was that! (By the way the mechanical pony Butterscotch….not the same), at least in the mind of a child whose heart was set on a real pony!

I tried every which way to get that easy bake oven to work. I put in a new bulb, changed the batteries, tried every outlet in the house and I just couldn’t get the oven to turn on!

The girls stood in the kitchen with their little tiny cake mixes, waiting patiently, but there was nothing I could do. It had sat in the box too long and it simply wasn’t going to cook the mini cakes they held in their hands.

Their little faces looked so sad and I thought my girl might actually cry; so I said, “Why don’t we just go to the store and buy the ingredients to make real cookies and cupcakes.” Well, that did it, smiles on both faces and off to the store we went!

Now my youngest daughter has hair that is very long and is usually tied in one long ponytail, however not this evening. As I prepared to bake with the girls, setting out bowls, eggs, oil, mixer, pre-setting the oven, etc., here came the girls…um! My daughter’s friend was leading my daughter by the hand.

You could not see her face; she looked hilarious and was dead serious. “I shall be cooking like this evening,” she said as her friend giggled. My daughter by the way never giggled or laughed. (I told you she’s a character).

“Oh really,” I replied, “And how to you propose you’ll be doing that, exactly, I mean since you can’t see and all?” My little one continued. “My friend shall guide my arms and hands,” she replied as her friend proceeded to lift her arms. Now I’m not going to lie, my gut instinct was to say, “Ok. That’s crazy insane, stop it, move your hair let’s bake!” but then I looked at her, Cousin It, standing before me in my kitchen and I died laughing! It was hilarious, really soooo funny!

“You look just like Cousin It,” I said, “Where’re your glasses?” Well needless to say they had no idea who Cousin It was. I shall go and buy the series, if possible, classic isn’t it! But I kid you not; they baked two batches, just like that. Her friend moved my daughter’s arms because she couldn’t see, laughing the whole time. Batter all over them.

I can’t begin to tell you how much I appreciate that trait in my daughter, the ability to freely use her imagination. It is a beautiful thing to watch and I feel blessed to watch it unfold before me. My mom had the ability to encourage such things; I hope I will always do the same. Encourage my children and never discourage the ability to use their imaginations regardless of how ridiculous it may seem in the moment.

Well needless to say I had to finish cooking the cookies and the cupcakes! But I don’t think I will ever forget those two little girls in my kitchen or should I say baking with Cousin It, what are the odds!

Cookies, Cup Cakes, and Cousin It…fantastic is it not!

The Door In The Wasteland