As an internationally syndicated small business columnist, I had the pleasurable duty to read all of Dr. Steven Covey’s books, the most-famous of which is The Seven Habits of Highly Successful People. In addition, I had the privilege of hearing Dr. Steven Covey speak for several hours over four sessions back in 1996 and write a column about my experiences.

Covey just drew me into his world of wisdom for the workplace. I could tell he walked his talk by the way he showed physically at times the reality of the importance and thought behind one of his Seven Habits. For example, First Things First became a physical presentation of Big Rocks First, where he stood before a table with big rocks, little stones, sand and water on it. Then he took a see-through container and began putting in some sand, some water, some small stones and, last, the big rocks. Of course, he couldn’t get the big rocks in. Then, he took a new see-through container and put the big rocks in first, then the smaller stones, then the sand and, last, the water. It all fit. Do you think I could every forget, Do the Important Stuff First?

Another Habit, Sharpen the Saw, Covey showed with a story of two lumberjacks having a contest. During the contest, one of the lumberjacks kept stopping every once in a while to sharpen his saw. Who won the contest? The lumberjack who kept sharpening his saw, naturally. Just like a knife, a sharp saw cuts faster than a dull one. To this day, I still read incessantly, study subjects I write about, and attend college to take courses in my field. Why? I believe in sharpening my saw. 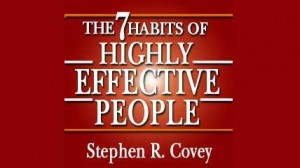 Do these examples lead you to believe that Dr. Steven Covey’s principles and practices of success are still relevant today? Consider the following discussion of what I experienced nearly sixteen years ago and decide for yourself.

Through the marvels of teleconferencing, 221,000 participants from 40 countries at over 336 sites simultaneously watched the first session of the “Worldwide Lessons in Leadership Series,” presented on behalf of Marist College Center for Corporate and Professional Education in cooperation with Fortune Magazine.

I watched featured speakers, Drs. Steven Covey, Tom Peters, and Peter Senge speak about leadership during four sessions over three months for more than fifteen hours. The overall purpose of this conference was to discuss the premature arrival of the future and to challenge assumptions and give incentives for businesses to make the paradigm shift that will bring about the global marketplace.

So, nearly two decades ago, three top motivational business speakers were preparing us for our global marketplace of 2012.

The four sessions each had a single focus:

How to Make Your Team Unstoppable
Personal Effectiveness
Group Effectiveness
Organizational Effectiveness
All three speakers addressed the first topic. Steven Covey focused on synergy and the importance of understanding communication. He presented a listening continuum chart that showed the evolutionary stages of listening:

He taught that when workers are able to interact with empathetic listening, their communication moves forward without the complications of individual perceptions and semantic problems of individual meanings of words and situations. Through understanding, trust–the key to team effectiveness–is built. An important way to build trust inside and outside of the workplace is, “Always speak about other people as if they were present, whether they are present or not.”

Other aspects of successful communication highlighted included the driving principle: “Seek to understand before you seek to be understood.” Most people are not arguing just to be right, but to be respected, to be understood, and to be valued.

All these years later, I am still living Covey’s Seven Habits of Highly Successful People when I am in the zone. And, I am in the zone more often because of Dr. Steven Covey’s leadership legacy. Covey devoted the lion’s share of his life helping business leaders be their best, performing at their highest possible levels more of the time than they ever thought possible with Covey’s leadership principles.

© 2012 Electric Envisions, Inc.
Barbara Garro, MA, CPCU is a Motivational Writer & Coach, Speaker, author of Grow Yourself a Life You’ll Love and From Jesus to Heaven with Love: A Parable Pilgrimage.
Contact: 518-587-9999, Garro@ElectricEnvisions.com

Maya Kavita Apr 6, 2015 0
Let the Wookiee Win The LA Times once published a list of the top 10 sidekicks of all time. For the record, in The…
Publishing