We have not had a guest on Center Stage for a while. The reason is quite simple. Sometimes I find that some writers send me their book to read, and I make my honest opinion of how I found the book. It me..me? remember not reading on behalf of millions but sharing my thoughts with hopefully a large section of humanity through the internet. That is where we all meet these days on a virtual world.

I was wary therefore when I was invited to read THE BLUE KIND by Kathryn Born. I communicated with Kathryn to get a sensing of the book but al I got was a sensing of a warm person. I did not even realize in time that Kathryn is such a pretty woman until she sent me her picture. But that was after she had replied my questions and I was bowled over by her answers. 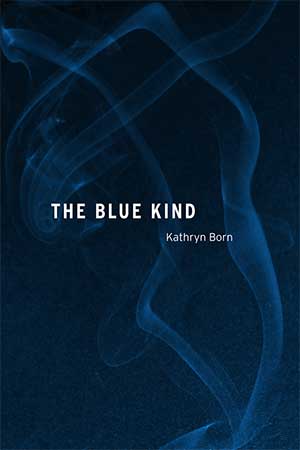 It is my distinct pleasure therefore to invite another ‘earned’ friend and Author to Center Stage. But before we read from Kathryn, let me share with you my thoughts on her book ….The Blue Kind

The Blue Kind is a strange story for me. It’s like reading about the damned and riding past your horror to see some humanity in a collection of wasted humanity. It is like moving sluggishly in a land where it is nightmarish to be alive and awake. It is like I just wrote, being a visitor to a type of hell. It is tough writing and something totally strange to me and to all that I have ever read. I would like to congratulate Ms Born for making a difficult subject readable. Allison’s search for her lost soul in the fumes and degradation of her addiction is definitely admirable and I found myself reluctantly empathizing with her. I really could not put the book down because it scared, challenged me and I was half afraid of becoming addicted. It challenged me to see that not all books needed to be happily ever after and it took me on a terrifying dizzying ride on the really dark side of midnight.

Thank you Ms. Born for this opportunity, I am tempered by this book to accept that life is not black or white but whole shades of grey mixed in. Once again my heartfelt Congratulations and warm respects.

Congratulations on your book THE BLUE KIND!

Please tell us a bit about yourself and why you wrote the book
I started writing the first version of the novel in 1992, when I was around twenty. I guess I felt compelled to write a story like this because, at the time,  my life was so strange and I wasn’t seeing anything like it in the contemporary literature I was reading. Although the version from the 90’s wasn’t publishable, the book and its characters haunted me over a number of years.  In 2007 I re-visited it.  Having become a professional writer and editor I decided it needed a full line-by-line rewrite, and a complete restructuring. I’ve always been influenced by film structure, and the pacing of films. Reading read Syd Fields’ Screenwriting and Maas’ Writing the Breakout Novel helped me take my book to another level. My time away from the story also allowed me to look at it with fresh perspective.

You seem interested in death and the after life, is that correct?
I don’t believe in the afterlife, but my life has been mixed with death from an early age. (My birth mother died in an accident when I was a toddler), and since then, I’ve lost others as well. But I also feel like our limited lifespan gives our lives a sense of urgency, and in the novel I play with the idea of immortality being tied in with listlessness – a total lack of motivation.

Your book is almost mind bending and you portray very skillfully how one can cross the thin line between reality and fantasy, what do you think?
Thank you for the kind words. Using fantastic elements is the core of my writing style because I love creating imaginary elements the characters have to respond to, it makes things more exciting than ordinary realities. In this book, lawlessness is a central theme – so even “the laws of physics” don’t stand a chance in this place.

Have you ever worked with drug addicts?
I’ve been one. So I was squarely “in that community” of addicts.  I personally struggled for over 10 years, and the first draft was written in the early stages of going down the rabbit hole. But I only when I quit did I have the mental strength and discipline to actually make the novel readable and “structurally sound”. But to get back to your question, I’ve lived in that circle, but I’ve also built a lot of bonds with other people who’ve quit “the life” as well, and that is the community I’m connected to today.

Do you think immortality can be achieved?
My husband likes to think so, ha ha. “The Singularity” is a big topic in our home. I do think, for young people, our lifespan could average 120, I think there are some huge medical advances on the horizon.

What genre can we place this book?
I say “Magical Realism”, although that’s kind of 90’s lingo. It’s really just fiction with fantastic elements and lots of satire and metaphors, I really don’t like most science fiction, so I really avoid that term.

What has been the reception since the book came out
The way it resonated with readers of the early versions definitely motivated me to get it published.  Now that it’s been released (a week ago) the book criticism jury is still out, but Booklist gave it a great review and people have been enjoying it on Goodreads. It would be great if the novel “takes off”. Either way, I’m writing a new novel and working on it as an indie film.

We are bound sometimes by what we write, will you recommend those who might read the book?
I guess just to relax and not worry about things not making sense.

Share your typical writing day and format?
Well, I work a lot at day jobs, so I can’t write every day. I have to clear my schedule
and write during chunks of time – so I often go a month without writing. Hopefully that will change and I won’t be so swamped with life.

Thank you for coming on CenterStage.

Here is a link to getting copies of The Blue Kind

Self Published Authors, You’re Being Dumped!